Tread carefully or make some noise?

December 19, 2021 by Dimithri Wijesinghe No Comments

The trans community in Sri Lanka has been granted a sort of reprieve via the implementation of the Gender Recognition Certificate (GRC). For the uninitiated, the GRC is a document that trans persons, who wish to change their identification documents such as their national identity card or birth certificate, must acquire if they wish for their identity documents to tally with their identifying gender.

It is not in any way a novel concept; it is a widely recognised concept around the world. It is a service that states offer the transgender community so that they need not continue to face obstacles in their day-to-day lives when using their government-issued identification document, which does not represent who they truly are. 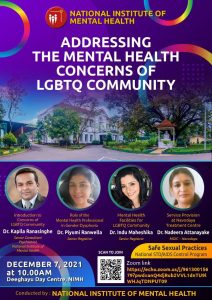 Encouragingly, Sri Lanka too has implemented this service via a gazette notification, General Circular No: 01-34/2016, which provides for the “Issuing of Gender Recognition Certificate for Transgender Community”, which was signed by the Director General of Health Services at the time. The GRC is issued by the Ministry of Health for the purpose of changing the gender and name on birth certificates, issued under Sections 27 and 52(1) of the Birth and Death Registration Ordinance.

This general circular came into effect in 2016. One of the leading personalities who was instrumental in effectuating this change – National Institute of Mental Health (NIMH) Senior Consultant Psychiatrist Dr. Kapila Ranasinghe – shared that initiating this process was no easy task. He said that they had to tread incredibly carefully when proposing this type of change to the Ministry at the time.

He provided that when the GRC was recommended, there was a lot of opposition, with many claiming that it would be misused. Therefore, when issuing the circular, they did not even bring private medical practitioners onboard as signatories for this document. He stated that this was all in an effort to make sure that they received the go ahead and were able to provide this much-needed service for the transgender community in Sri Lanka.

While Dr. Ranasinghe’s efforts are greatly appreciated in the community and his continued support has been a great strength for the lesbian, gay, bisexual, and transgender (LGBT) community at large, as of recent times, a question has arisen as to whether there is a concern with gatekeeping when it comes to the mental health services for the LGBT community in Sri Lanka, particularly for the trans community, notably in relation to the GRC.

We spoke to NIMH Senior Registrar Dr. Piyumi Ranwella, who laid out the requirements for acquiring the GRC, the same as those which are also provided in the general circular. The overview of the requirements provide that you must first consult with a specialist psychiatrist, i.e. a consultant psychiatrist.

The question of “gatekeeping” comes up with regard to this requirement, primarily because there is a serious lack of resources in the state sector when it comes to offering mental health services for the LGBT community.

NIMH Senior Consultant Psychiatrist Dr. Ranasinghe himself has consistently stated that they simply do not have the support or the resources to provide this necessary service in an efficient capacity. He said that while they are doing their best, it is important to tread carefully, as this remains a sensitive matter in Sri Lanka. He noted that to the general listener, the implication could be such that the authorities are easily shaken when it comes to the LGBT banner, and therefore, we must be tactful in our approach when asking for improvements.

It would seem that what Dr. Ranasinghe stated is evident in practice. When speaking to members of the community, we came across numerous transgender individuals who claimed that they have struggled to acquire even a single clinic date to receive their first consultation, as Dr. Ranasinghe is overbooked and the clinic dates are sometimes many months away.

Considering the lack of trained professionals willing to support the community, perhaps it is time to look at private sector actors to lend a hand. The question has been posed by members of the community, who wondered if it is time that we took the next step in furthering this “regulation”, especially considering that it has been a good five years, and things have been going as smoothly as one could expect.

Perhaps we can now look to private sector medical professionals to provide assistance, as it does appear to be the best option to remedy this lack of resources.

Of course, a lack of resources lends itself to numerous other issues, including persons who are not suitable for the position carrying out certain parts of the role. When speaking to some transgender persons in Sri Lanka, they expressed that they face difficulties on many occasions, even at the mental health clinic, if they are unlucky enough to be appointed a doctor who has a personal agenda to “convert” trans persons; they sometimes berate and humiliate them, and claim that they need not change their gender, which they were assigned at birth.

They also face challenges at the registration offices, where, despite being well aware that once the GRC has been issued, the trans persons are entitled to have their identification documents changed, there are certain officers who take it upon themselves to make things difficult.

We asked Dr. Ranasinghe about those medical professionals who are acting against the best interest of their patients, to which he said that the patients must make a complaint to the Director of Mental Health.

Additionally, we would like to encourage community members to also file a complaint with the Human Rights Commission of Sri Lanka (HRCSL) if they face such an incident with a state-appointed medical professional. The same can be done if one faces a similarly bad experience at the registration offices, if one feels they have been treated in a discriminatory manner. By virtue of being a Sri Lankan citizen, you are then entitled to seek relief from the HRCSL.

Fear of rocking the boat

One primary reason why things progress extremely slowly in Sri Lanka when it comes to the LGBT community is that, understandably, there is a general fear of drawing too much attention to oneself. We are a largely passive population, and as such, you would be left alone most of the time. However, actively fighting for something, i.e. activism, does pose a challenge.

The GRC, at this very moment, is only part of a general circular, and is easily revocable. Therefore, the voices that demand progress and the next step in the GRC are cautious in their requests. It is a shame, however, that a community asking for a basic human right must tread carefully. It is quite tragic to think that some of us can be as loud as we like about our requests from the State, but there is a whole community who must be careful about how they speak, in fear of being silenced – or worse – entirely ignored.

Prevention is better than cure, especially with the environment: ChildFund SL hosts ‘Young Leaders for Environment 2021’

April 1, 2021 byNews Admin No Comments
Empowering youth in any form is always an investment made in our future as mankind. Recently, ChildFund Sri Lanka hosted “Young Leaders for Environment 2021”, a symposium that shared ChildFund Sri Lan

‘Travelling opened up my mind to other cultures, cuisines, and traditions’

November 12, 2021 byNews Admin No Comments
Living in the central part of the country surrounded by greenery all her life, inspired Senuri Jayasinghe to follow her heart and explore the wonders that Sri Lanka has to offer. Currently sitting for