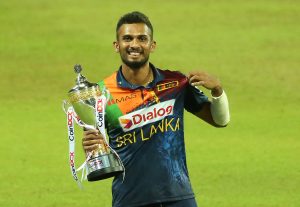 A rare series of brotherhood 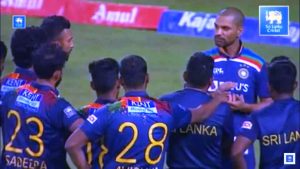 A rare one: Dhawan sharing his view with SL team after yesterday’s match. Photo courtesy SLC

The spirit and brotherhood shown by the two teams, India and Sri Lanka, despite their fierce competitive playing in the middle, exhibited one of the greatest cricket series in recent times, which is a rare gem of a lesson for future generations of both countries.

The Lanka team had asked Indo Skipper Shikhar Dhawan to share his thoughts after the end of the match yesterday (29) and he was seen doing so – another rare, great sight to behold.

By sending a team at the height of a pandemic, deciding to stay on even when their squad members got contracted by the deadly virus, and playing the game to the highest spirit of it, even when they were losing, showed yet again that India is none other than Sri Lanka’s “Big Brother”, to the very core of the meaning of that term.

Leg-spinner Wanindu Hasaranga’s creditable display with the ball again on his 24th birthday yesterday (29), Dasun Shanaka’s stunning display of taking a couple of smart catches in the field while leading the way from the front for the Lankans, and Dhananjaya de Silva keepin his cool as Sri Lanka crossed the line of 82 runs for victory… it was a soothing drizzle for a long drought in Sri Lanka’s cricket.

The hosts won the match by seven wickets at R. Premadasa under lights to take away the series 2-1, the first time they beat India in a T20I series since their first meeting in 2009.

It was also the first series loss for India after eight consecutive series, and Sri Lanka’s first T20 series win against any country since 2019.

After restricting India –hampered severely by a Covid-19 strike in their camp with almost nine of their leading players under ether isolation or quarantine– to a meagre 81/8, Sri Lanka chased the target comfortably, reaching home with as many as 33 balls to spare with seven wickets in tact.

The hand of God and magnamonius Magnus

November 29, 2020 byNethmi Liyanapathirana No Comments
As the news of Diego Maradona’s passing reverberated around the world, football fans all over were plunged into mourning.

On This Day – 31 August: Sobers hits six sixes in an over in England

August 31, 2021 byRevatha No Comments
Most significant sports happenings of the day