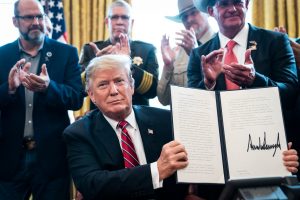 President Donald Trump has vetoed a measure from Congress revoking his declaration of a national emergency at the US-Mexico border.

Lawmakers, including 12 Republicans, had passed the rejection resolution on Thursday in a surprising rebuke of Trump’s pledge to build a border wall.

Congress will now need a two-thirds majority in both chambers to override him, which is unlikely to happen.

This is the first veto of Trump’s presidency.

“As president, the protection of the nation is my highest duty,” Trump said on Friday.

“Yesterday, Congress passed a dangerous resolution that if signed into law, would put countless Americans in danger.

“Congress has the freedom to pass this resolution and I have the duty to veto it. I’m very proud to veto it. ”

Trump repeated his claims that illegal immigrants from the southern border were mostly criminals, bringing drugs into the country.

He had promised a veto of the resolution ending his emergency declaration as soon as the measure was circulated on Capitol Hill.

The Democratic-controlled House of Representatives had passed the resolution to overturn the emergency last month, and 12 Republicans sided with Democratic Senators to clear the Senate in a 59-41 vote on Thursday afternoon.

The renegade conservatives had condemned the emergency declaration for setting up a dangerous precedent for a president while emphasising that they still agreed with Trump’s tough border security policies.

February 11, 2021 byLahiru Pothmulla No Comments
US President Joe Biden announced Wednesday that he will impose sanctions on military leaders in Myanmar who directed the coup that deposed and detained its elected leader Aung San Suu Kyi, President W

July 2, 2019 byRandev No Comments
Hong Kong's leader Carrie Lam has condemned what she called the "extreme use of violence" by protesters who stormed and vandalised the territory's parliament on Monday night.