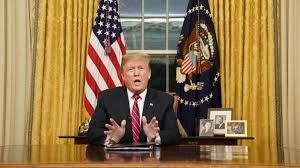 US President Donald Trump is to declare a national emergency to fund his planned border wall with Mexico, the White House has said.

He will sign a border security bill to avert a government shutdown – but also act to bypass Congress and use military funds for the wall, a statement said.

Senior Democrats have responded by accusing him of committing a “gross abuse of power” and a “lawless act”.

Building the wall was a key election promise by Trump.

But as president he has so far been unable to get the necessary funding to advance it.

Congress passed the bill – which does not meet Trump’s demands for wall funding – on Thursday. It now has to be signed by Trump to become law. (BBC)

December 18, 2019 byTSM Web Desk No Comments
President Donald Trump has lashed out over his impending impeachment in an irate letter to top Democrat Nancy Pelosi, accusing her of declaring "open war on American democracy".