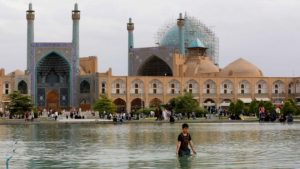 US President Donald Trump has faced growing criticism over his threats to attack Iran’s cultural sites.

Mr Trump made the threats amid fallout from the US assassination of Iranian commander Qasem Soleimani.

The president said cultural sites were among 52 identified Iranian targets that could be attacked if Iranians “torture, maim and blow up our people”.

But the UN’s cultural organisation and UK foreign secretary were among those to note that such sites were protected.

The US and Iran have signed conventions to protect cultural heritage, including during conflict. Military attacks targeting cultural sites are considered war crimes under international law.

Qasem Soleimani was killed in a US drone strike in Baghdad on Friday on the orders of Mr Trump. The killing has sharply increased regional tensions, with Iran threatening “severe revenge”. BBC

December 5, 2018 byMalik No Comments
Theresa May has suffered three Brexit defeats in the Commons as she set out to sell her EU deal to sceptical MPs.

January 22, 2020 byTSM Web Desk No Comments
A new virus that has killed nine people could mutate and spread further, Chinese health officials have warned, as they step up containment measures.