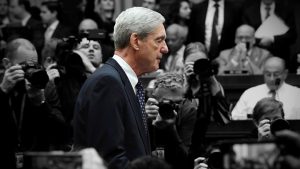 US President Donald Trump’s claim that he was “totally exonerated” by special counsel Robert Mueller was rejected by Mueller in a hearing on Wednesday.

Mueller said he had not exonerated Trump of obstruction of justice.

However Trump criticised Mueller’s performance and said: “This was a great day for me.”

Mueller spent two years probing alleged collusion between the 2016 Trump campaign and Russia, but did not establish collusion in a crime.

However he concluded that Russia interfered in the election on Trump’s behalf.

In all, 35 people and three companies were charged by the special counsel on matters relating both directly and indirectly to alleged Russian interference in the 2016 election. No members of the Trump family were charged.

Mueller – a former FBI director – and his team concluded that they were unable to charge the president with a crime, but could not exonerate him either.

What did Mr Mueller say?

Across two Congressional hearings, Mr Mueller repeatedly declined to stray outside of confines of his 448-page report, generally giving clipped answers or referring committee members back to the text of his findings.

He appeared at times to struggle with the proceedings, amid convoluted and detailed questioning from House committee members about various parts of his team’s 448-page report.

The questions focused largely on Mueller’s investigation of President Trump and his decision to say he could not exonerate the president of obstruction of justice, but Mueller repeatedly stressed the importance of concerns over ongoing Russian interference in US democracy.

“Over the course of my career I have seen a number of challenges to our democracy. The Russian government’s effort to interfere in our election is among the most serious,” he said.

He added: “Much more needs to be done in order to protect against this intrusion, by the Russians but others as well.”BBC

November 22, 2019 byTSM Web Desk No Comments
US President Donald Trump disregarded senior advisers and pushed a false theory that Ukraine meddled in the 2016 election, an ex-White House aide has told the impeachment inquiry.