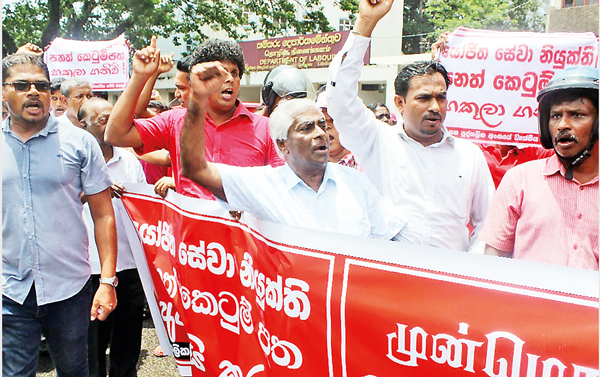 At first glance, the draft unified employment legislation would look very promising to the new-age worker with employers required to adapt a non-discriminatory policy when employing persons, allowing part-time work and giving opportunities for young persons aged 16-17 to seek employment as trainees or apprentices.

The employer is also not allowed to ask about your family, marital, or pregnancy status at the time of employment, and if you are subjected to sexual harassment at the time of being interviewed or after being employed, you can press charges against such persons.

Furthermore, language would be a bona fide requirement at the time of recruitment and every employee has the right to be part of a workers’ association or union and for the convenience of working parents of toddlers, crèches would be established in larger organisations to care for children below the age of five during work hours.

However, trade union leaders representing various industries have identified the negatives of this proposed Act and on 21 August, 23 trade unions protested against the implementation of the new unified employment legislation. Prior to that, they had submitted a letter to the Ministry of Labour and Trade Union Relations indicating that if provisions in the draft law are to be implemented, it would create a labour force with no real safety and guarantee in employment, turning it into a social issue.

The trade unions further believe that it would have an adverse impact on public sector employees and society as a whole.

With the Bill being successfully drafted and presented to the National Labour Advisory Council (NLAC) on 9 July, the trade unions seemed to oppose the new law and have now requested Minister of Labour and Trade Unions Ravindra Samaraweera to withdraw the proposal that is to be presented to Parliament.

The proposed Unified Employment Act promises to address the issues of concerns that the labour sector has by repealing multiple acts and provisions that are enacted by the private and public sectors:

The Sunday Morning contacted Janatha Vimukthi Peramuna (JVP) trade unionist Wasantha Samarasinghe, who continuously supported the efforts of trade unions by raising their concerns in Parliament when he was an MP, to inquire as to how the new Act, if approved, would impact the workforce of the country.

“The proposed Unified Employment Act will have grave implications towards the casual cadre and those who gain employment through manpower agencies. This is going to cause job insecurities as employers seemed to be more empowered in deciding how an employment contract would be written. For example, they will now even have the ability to get employees to work 12-hour shifts; the weekly off day could even be shifted to the middle of the week if the employer deems it fit.”

Samarasinghe also pointed out that by allowing the employment of younger persons aged 16-17 in the workforce, the State will be hindering their secondary education. At the same time, job opportunities will be deprived from adults as the wages that need to be paid to novices become a fraction of the amount that should be paid to permanent employees.

“The proposed Act will also jeopardise their work-life balance, with employers being given the option of increasing the number of work hours up to 12 hours per day, and employers deciding when you could take your weekly day off instead of the set leave – half-day on Saturday and full-day on Sunday – that is presently enjoyed by the workforce.”

The policy objectives of introducing the Unified Employment Act:

Yet, Free Trade Zones and General Services Employees Union Joint Secretary Anton Marcus informed The Sunday Morning: “The proposed law would repeal the Wages Boards Ordinance that decides basic working conditions of around eight million private sector workers and would also repeal the Shop and Office Employees Act and Maternity Benefits Act. Employers will be given the right to decide working conditions in employment contracts and this law provides legal coverage for such employer-decided contracts.”

Marcus also informed that the law will empower the employer and restrict the rights of the employee, stating they would even be able to stipulate work hours up to 12 hours, keep employees on contract basis without absorbing them to the permanent cadre, change the weekly off day to even the middle of the week, not pay overtime, offer jobs even for hourly wages, and offer employment for minors among many other rights violations.

Minister of Labour and Trade Unions Ravindra Samaraweera, when contacted to clarify the progress of the draft discussions, stated: “This is the initial draft of the Unified Employment Law and it is now tabled for discussion and review at the Labour Advisory Council at the Ministry. While we have made this initial draft accessible to parties concerned, during this stage, we are allowing them to forward their concerns and recommendations to us.”

When inquired whether the proposed laws would have an effect on the existing labour rights, Samaraweera informed that none of the existing rights would be curtailed. “If the trade unions have spotted any such clauses which would affect the rights of the workers at any level of employment, now is the time for them to share their concerns with the Labour Advisory Council. We would take their recommendations in to due consideration before preparing the final draft that would be presented at Parliament.”

April 7, 2021 byNews Admin No Comments
World Autism Awareness Day has, as all other days dedicated to one thing or the other, come and gone without much ado by way of anything, let alone the commercial prospects that mark Saint Valentine o

March 10, 2020 bythemorninglk No Comments
Recent developments indicate that the Government would be taking measures to monitor and regulate non-governmental organisations (NGOs), with the first step being financial regulation.