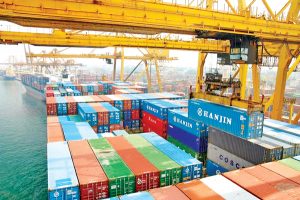 Trade Unions affiliated to the Sri Lanka Ports Authority have threatened to cripple operations at the Colombo Port if the Government failed to cancel the joint Memorandum of Understanding (MoU) reached with Japan and India on the East Container Terminal (ECT).

The SLPA signed the joint MoU last week to develop the ECT at the Colombo Port. The SLPA stated that the new partnership would help the Colombo Port to continue its growth and further improve its competitiveness by opening itself up to the world.

According to the agreement, the SLPA retains full ownership of the ECT and a company named the Terminal Operations Company (TOC) would be established, and Sri Lanka would retain 51% while the balance shares are purchased by joint venture partners.

The All Ceylon Port General Workers’ Union (ACPGWU) General Secretary Chandrasiri Mahagamage told The Sunday Morning that the SLPA had incurred a loss of $ 5,500 million during the last four years due to the delay in installing the machinery.

“We have completed work on a 450 m section of the terminal and the Ports Authority spent a total of Rs. 10.8 billion on this project. The civil engineering activities, the electrical aspect, as well as preparing the entrances have all been completed. All that is needed to be done is to install the necessary machinery. The Ports Authority has the money to do it, but the Minister and the Government have no interest in it. The Colombo South Terminal began because we wanted to have a port which could accommodate the large ships that are being built elsewhere in the world,” he said.

“In 2015, former SLPA Chairman Dhammika Ranatunga cancelled the tender calling for obtaining the machinery, claiming that it was corrupt. Later, Minister Mahinda Samarasinghe didn’t do anything to negotiate the purchasing of machinery and then we requested current Minister Sagala Ratnayake to put the cabinet papers to purchase the machinery. Finally, he negotiated the signing of the MoU with Japan and India,” Mahagamage stressed.

He alleged that even though Sri Lanka had retained 51% of its shares, it could be sold to private companies including the possibility of selling to Japan or India.

“We were informed that the Japanese company had imposed a condition that those shares couldn’t be sold to any Chinese company. This is a severe political issue as well,” he said.

“Even though we have 51% shares, the operations are handled by Japan and India, which means the recruitment would also be done by them and not Sri Lanka,” Mahagamage said.

“In addition to signing the MoU, the Government is also obtaining a loan totalling $ 500 million from Japan on a 1% interest rate to purchase machinery,” he stressed.

“The granting of the ECT to foreigners would directly affect the operations of the Jaya Container Terminal (JCT) which is owned by the SLPA which couldn’t accommodate larger ships. The only hope that we have is the ECT, and the President promised us in 2017 that he would not give the ECT to foreigners,” Mahagamage noted.

“Stern trade union action would be taken against this deal in the future if the President did not reverse the Government’s decision. Currently, we are educating all employees regarding the impacts of granting this terminal to Japan and India,” he added.

Meanwhile, Ports and Shipping Minister Sagala Ratnayaka said that even though the MoU was signed with Japan and India for developing the ECT, the SLPA would retain control of the terminal and the terminal would be developed by them while Sri Lanka would be the sole owners.

He also said that they would obtain a concessionary loan from the Government of Japan to finance this development and the loan would have a 40-year payback period, at concessionary interest rates.

The MoU would be used to further discuss matters relating to the sale of shares. He noted that they have appointed a working group to discuss this matter and present it to the Cabinet and that is what was achieved through the MOU.

Attempts to contact SLPA Chairman Kavan Ratnayake were futile as he was overseas.

May 24, 2021 byNews Admin No Comments
Or to put it another way, why is it that Sri Lankan leaders - state and private sector - often take wrong decisions that have negative impacts, and after weeks or months of much confusion have to resc

September 10, 2020 byCharindra No Comments
The report which has reportedly revealed that State Minister Sanath Nishantha’s brother was responsible for the destruction of the Anavilundawa wetland in Wanathawilluwa has been refuted by the Minist