Shashika Dulshan picked up his maiden five-wicket haul as Sri Lanka Under-19 beat Hong Kong Under-19 by ten wickets in their second match of the 5th Under-19 Asia Cup, conducted by the Asian Cricket Council, at Zahur Ahmed Chowdhury Stadium, Chittagong, Bangladesh on Sunday, 30 September.

Left-arm orthodox spinner Dulshan picked up five wickets for just 19 runs. He was adjudged the Man of the Match. Dunith Wellalage and Kalana Perera took two wickets each.

Sri Lanka U-19 reached the target for no loss in just 9.2 overs.

Paranavithana scored 35 not out in 29 balls with five boundaries while Nishan Madushka scored an unbeaten 21 in 27 balls, with four boundaries.

Sri Lanka will meet Pakistan on Tuesday, 2 October in their last Group-stage match.

The top two teams in the two Groups will meet in a semi-final-round on 4 and 5 October before the final on Sunday, 7 October. 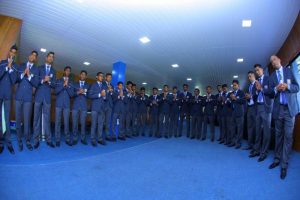 Sri Lanka U-19 before their departure, at the SLC headquarters last week. Their team is assisted by renowned veterans in the caliber of Hashan Tillakaratne, Chaminda Vaas, Upul Chandana and Hemantha Devapriya

Sri Lanka U-19 won the toss and elected to field.

Bangladesh were bowled out for 141 runs in 46.4 overs. Towhid Hridoy scored 35 and Tanzid Hasan scored 24 runs.

Right-hand bat Nuwanidu Fernando made an unbeaten 64 in 94 balls with seven boundaries and a six. He was adjudged the Man of the Match.

Meanwhile Afghanistan, Pakistan and India won their matches against UAE, Hong Kong and Nepal respectively on the first day of the Under-19 Asia Cup in Bangladesh.

August 2, 2021 byRevatha No Comments
When and where will the Proteas play their matches next month in SL?