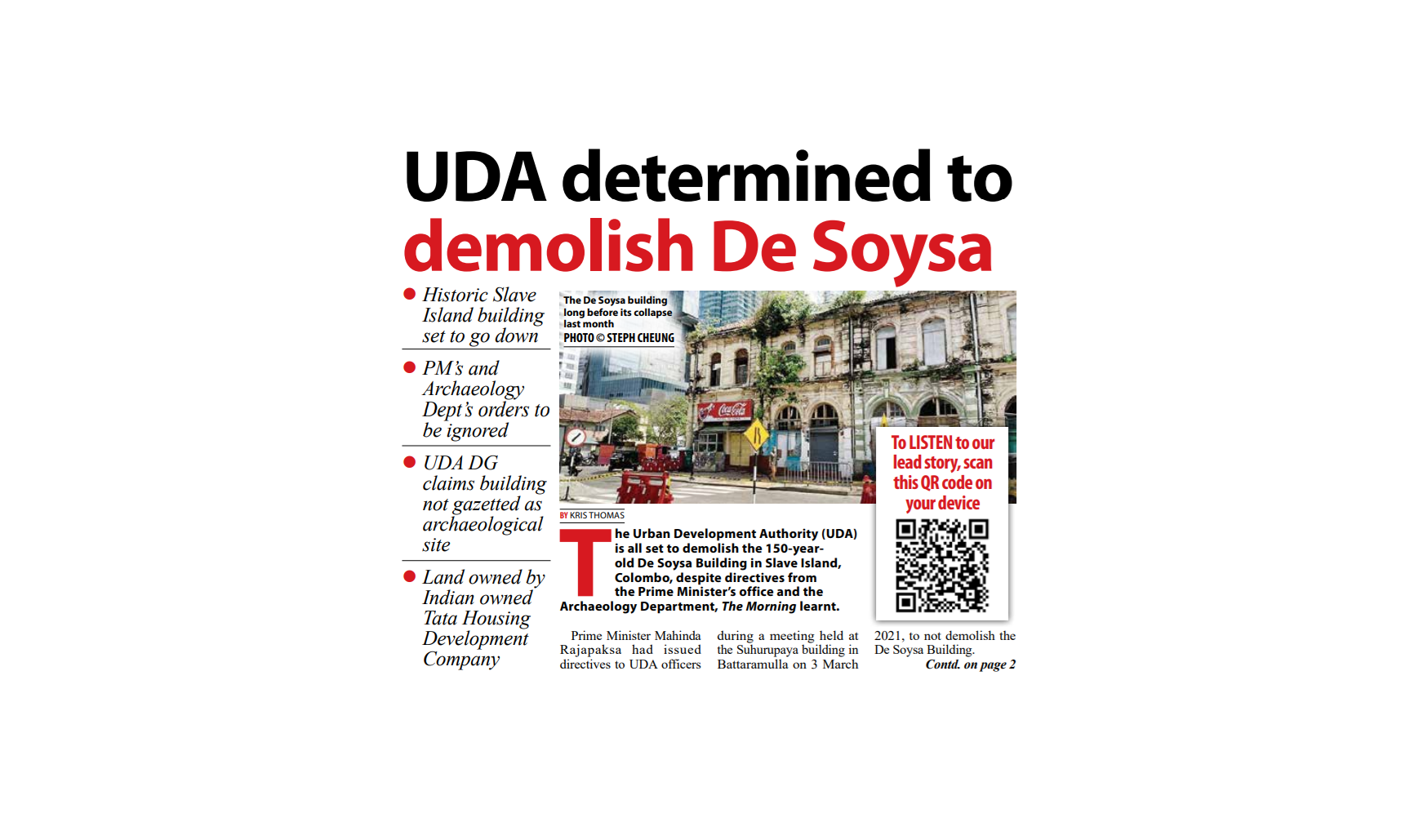 The Urban Development Authority (UDA) is all set to demolish the 150-year-old De Soysa Building in Slave Island, Colombo, despite directives from the Prime Minister’s office and the Archaeology Department, The Morning learnt.

Prime Minister Mahinda Rajapaksa had issued directives to UDA officers during a meeting held at the Suhurupaya building in Battaramulla on 3 March 2021, to not demolish the De Soysa Building. The meeting was held for the purpose of reviewing the ongoing development projects in Colombo and to discuss obstacles that have been encountered in this regard, with the participation of representatives of all Government institutions and authorities that are under the purview of the Prime Minister’s Cabinet portfolios.

This British colonial era edifice was in the news recently when parts of the building collapsed on 17 June due to water-related damage.

The Archaeology Department Director General (DG), Senior Professor Anura Manathunga, speaking to The Morning, confirmed that the Prime Minister had directed the UDA — who had made clear their intention of demolishing the said edifice — to work with the Archaeology Department in order to refurbish the building so as to preserve its historical significance.

However, the UDA superiors are now denying any knowledge of the Prime Minister’s directives. UDA DG Prasad Ranaweera, when inquired by The Morning about the 3 March meeting where the Premier had issued directives to preserve the building, claimed that he was unaware of such instructions.

“Right now, the building is marked for demolition. The building has not been gazetted as an archaeological site either,” Ranaweera said.

The De Soysa Building was constructed in the 1870s by the late philanthropist Charles Henry De Soysa, who intended the building to be used by the people of the area for business purposes as well as for residential purposes. The two storied building stretching along the concave curve of the Justice Akbar Mawatha in Slave Island, functions as a series of shop-houses facing the Justice Akbar Mawatha, with the ground floor housing a set of shop spaces with the first/upper floor accommodating the shopkeepers’  residential quarters while individual internal staircases at the rear of the building, made out of timber, link each shop owner’s business space and residential quarters.

According to the Archaeology Department Consultant and architect involved in heritage conservation Nilan Cooray, outside of the Colombo Fort area, the building is possibly Colombo’s longest or widest building.

“Although it displays colonial British architecture, it was constructed by one of the respected families of that era, using their own funds. Therefore, there is a lot of historic and cultural significance to this building that requires protection.”

A handful of its original tenants continue to live in the building, many of whom have a generational relationship as well as an economic bond with the building as they have built their businesses alongside their families within the building.

One such long-time tenant, Noor Zulsky Passela and a handful of occupants have since 2018 challenged the UDA’s move to demolish the building, when they were earmarked by the UDA for eviction and the building for demolition.

“We may have to leave sooner than we thought. The authorities might try to demolish it sooner,” Passela claimed. “The authorities have already sold it to the Tata Company, so this land needs to be released to them.”

Residents claimed that weeks after the collapse on 17 June, several UDA officers and members of the Colombo Municipal Council (CMC) had arrived and advised them to evacuate the Building.

“There are people still living there and we need to vacate them first,” Ranaweera said. “After that, we can do something, because, at the moment, that building does not belong to the UDA. The property belongs to the Tata Group. We need to discuss with the relevant agencies and authorities as to what the next step should be.”

Under the Antiquities Ordinance, No. 9 of 1940 as amended, buildings that are over 100 years of age are declared as ancient monuments. Such a declaration can take place in two ways: either through a process of automatic declaration or through the gazetting of the building, declaring it as such. Under Section 16 of the Ordinance, buildings believed to belong to a period prior to 1850 are automatically declared as ancient monuments. However, under Section 18 of the Ordinance, the relevant subject Minister can declare any ancient building (over 100 years) as a protected monument, if the building is in danger of destruction or removal, or damage due to neglect or injudicious treatment. The provisions in Section 18 also hold that it is eligible for protection if it is in the public interest that such a monument should be protected with this in turn having to be declared through a gazette notification.

However, for the longest time, the gazette notification declaring the De Soysa Building as a protected ancient monument has been pending at the Archaeology Department. The cause for the delay has been identified as an error in the relevant gazette notification, which has incorrectly cited protection under Section 16 instead of Section 18. Since the De Soysa Building was constructed during the 1870s, it is not eligible for automatic declaration as an ancient monument under Section 16 which deals with buildings constructed in the pre-1850 period but it is eligible for protection as a protected monument under Section 18 as it is an ancient Building (over 100 years) that is in danger of destruction or removal, or damage due to neglect or injudicious treatment.

“The Archaeology Department is currently in the process of correcting this error,” Prof. Manathunga said.

According to him, the Archaeology Department hopes to call on the UDA, the CMC and representatives of development projects in Colombo to educate them on preserving and conserving heritage sites such as the De Soysa Building.

“We hope to call those relevant stakeholders, specifically those who are not in the archaeology field, in order to educate them and to lobby for change. This is a frequent problem that comes up with the Road Development Authority as well. We might not be able to protect everything. But there should be considerable attention paid to preserving and conserving heritage sites when making development sites as well,” Manathunga noted.

Prof. Manathunga’s sentiments are shared by not only the residents of Slave Island, who have been fighting a rapid gentrification programme of the area since 2014, but also by architectural heritage conservationists. Architect and heritage conservationist Cooray, who also has called for the preservation and conservation of the building cited a similar incident in Singapore, where following the destruction of its colonial era heritage sites, the Singaporean Government had realised the value of such buildings which had in turn resulted in an initiative to reconstruct such buildings.

“What is important is that a city or a town has its own memory; memories that reflect the historical layers reflected in different buildings from different eras. If you remove all these buildings and construct new ones, it would be like a person without any memory. That is why we want to preserve and conserve this building,” he emphasised.

October 11, 2019 byTSM Web Desk No Comments
The Elpitiya Pradeshiya Saba election which came to an end a short while ago has experienced a 72% voter turnout.

All elephant conflict zones to get electric fences by 2023