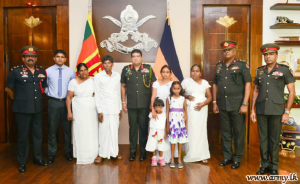 The United Nations granted compensation to families of two fallen war heroes who were on duty in trouble-torn Mali in January under the UN Peace Keeping mission.

The compensation on behalf of the UN was awarded by the Commander of the Army, Lieutenant General Shavendra Silva yesterday to family members of the peacekeepers at the Army Headquarters.

Major H.W.D Jayawickrama of Sri Lanka Light Infantry (SLLI) Regiment and the Senior Non Commissioned Officer, Sergeant S.S Wijekumara of Mechanized Infantry Regiment laid their lives in an explosion, triggered by tribal terrorists in that country while the Sri Lankan contingent was on patrol in Keerana area around 6.30 a.m. on that fateful day.

Their Wheel Armoured Personnel Carrier (WMZ) convoy came under an Improvised Explosive Device (IED) attack, killing both of them, and slightly injuring three more Sri Lankan Peace-keepers in the contingent.

Following negotiations that continued between the Army’s Directorate of Overseas Operations in the past few months, the UN decided to offer compensation, which were to be disbursed among dependent family members, including children, spouses and parents of both families.

March 28, 2022 byNews Admin No Comments
India has asked Sri Lanka to “exercise caution” and prevent casualties while cracking down on fishing boats belonging to Indian fishermen.

June 1, 2020 byTSM Web Desk No Comments
The Ministry of Health has already initiated plans to double the number of daily PCR tests conducted.