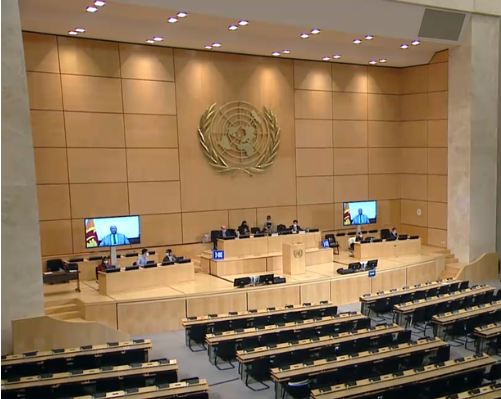 The vote on the Resolution on Sri Lanka by the United Nations (UN) Core Group of Countries on Sri Lanka was adopted yesterday (23) by the UN Human Rights Council (HRC) with a majority margin of 11 votes, with a total of 22 votes in favour of it, 11 against it, and 14 abstentions.

The resolution was tabled at the 46th Session of the UN Human Rights Council (HRC) which took place yesterday, where the Resolution on “Promoting reconciliation, accountability, and human rights in Sri Lanka”.

South Korea, or the Republic of Korea, was the only Asian country that voted in favour of the Resolution, along with 21 other countries mainly from the Western bloc. The countries that voted in favour were Argentina, Armenia, Austria, the Bahamas, Brazil, Bulgaria, Côte d’Ivoire, the Czech Republic, Denmark, Fiji, France, Germany, Italy, Malawi, the Marshall Islands, Mexico, the Netherlands, Poland, the Republic of Korea/South Korea, Ukraine, the United Kingdom (UK) of Great Britain and Northern Ireland, and Uruguay.

However, the country with the closest geo-historical-cultural ties to Sri Lanka, namely India, and Sri Lanka’s old ally Japan, abstained from voting on the Resolution. From the Asian region, Nepal and Indonesia also abstained, while Bahrain, Burkina Faso, Cameroon, Gabon, Libya, Mauritania, Namibia, Senegal, Sudan, and Togo were the other nations to abstain.

Notably, 10 of the 14 countries which abstained from the vote are Members of the Organisation of Islamic Countries (OIC). During the weekend, President Gotabaya Rajapaksa had contacted the OIC Secretary General Dr. Yousef Al-Othaimeen whilst Prime Minister Mahinda Rajapaksa had spoken to the Deputy King of Bahrain Salman bin Hamad Al Khalifa.

The Resolution titled “Promoting reconciliation, accountability, and human rights in Sri Lanka” was presented by the representative of the UK yesterday at the Council on behalf of the Core Group (UK, Germany, Canada, North Macedonia, Montenegro and Malawi), where the UK representative also mentioned that the Resolution is not “anti-Sri Lanka” and only hopes that it would help advance the human rights of all communities.

The Austrian representative, speaking on behalf of the European Union (EU), claimed that the Resolution was important due to “warning signs of a deteriorating human rights situation in Sri Lanka.”

The A/HRC/46/L.1 Resolution especially recognises the importance of preserving and analysing evidence relating to violations and abuses of human rights in Sri Lanka with a view to advancing accountability, and as such, a call has been made to implement an “evidence-preserving” mechanism in the country. It also requests the Office of the UN High Commissioner for Human Rights to present a written update to the UNHRC at its 49th Session, and a comprehensive report that includes further options for advancing accountability, at its 51st Session, following enhanced monitoring mechanisms.

December 30, 2021 byNews Admin No Comments
Amidst a health crisis that has wreaked havoc in the country, the health authorities express concerns about the risk of the re-emergence of another health crisis.

July 12, 2019 byRandev No Comments
Muslim Parliamentarians who resigned from their Ministerial portfolios have decided to accept their posts once again.