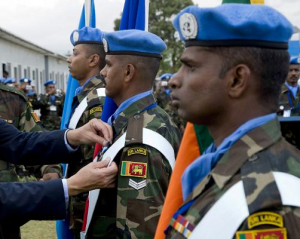 The Ministry of Defence (MoD) is to decide on future assistance for UN peacekeeping operations after a formal communication is received with regard to moves by the UN to suspend accepting Sri Lankan troops.

Defence Secretary Shantha Kottegoda said that the MoD had not received a formal communication from the UN yet.

On Friday (27), Foreign Secretary Ravinatha Aryasinghe, who is presently leading the Sri Lankan delegation to the 74th UN General Assembly (UNGA) session, had met with Under Secretary General of the UN Department of Peace Operations (USG/UNDPO) Jean-Pierre Lacroix at the UN Headquarters in New York to discuss obstacles placed on Sri Lanka’s peacekeeping contribution to the UN. He had raised concerns over the statement made by UN Spokesman Farhan Haq in New York last week, where he had said that as a result of the appointment of Army Commander Lieutenant General Shavendra Silva, the UN Department of Peace Operations had decided to suspend future Sri Lankan Army deployments except where suspension would expose UN operations to serious operational risk.

“The Government has not been officially informed of any decision by the UN that it would not be utilising our peacekeeping force,” Kottegoda said.

Meanwhile, Foreign Secretary Aryasinghe had told Lacroix that in relation to this issue, Sri Lanka was of the view that there had been serious discrepancies in the information released to the public domain by the UN.

It was pointed out that while the MoU with the UNDPO clearly stated that modalities for termination shall be agreed to following consultations between the parties, in this instance, the UN did not fulfill its obligation and took an unilateral decision and presented a fait accompli to Sri Lanka. The decision was conveyed during a courtesy call by the Permanent Representative of Sri Lanka on the UN USG, which was inappropriate, the Foreign Ministry said yesterday.

G.L. to attend 21st Meeting of IORA Council of Ministers in Bangladesh

The Kiwi approach to radicalisation

September 6, 2021 byNews Admin No Comments
Death and destruction are not the only things the Easter Sunday attacks wrought upon Sri Lanka; they also left us with a plethora of questions about the country’s security, our law enforcement agencie