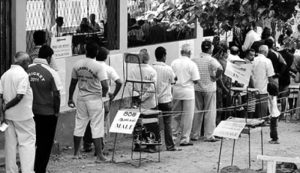 Uncertainty prevails over what was earlier termed an election year, with only the presidential election seemingly taking place.

2019 was termed an “election year” by political analysts, following the political turmoil which lasted almost two months, after President Maithripala Sirisena dismissed Ranil Wickremesinghe from his post of Prime Minister on 26 October 2018, before also attempting to dissolve Parliament.

More than five months have passed, but the Government is yet to declare an election this year. Therefore, election monitors claimed that only the presidential election would be held this year as it could not be postponed by the Government under any circumstances.

Speaking to The Sunday Morning, People’s Action for Free and Fair Election (PAFFREL) Executive Director Rohana Hettiarachchi said there was no political will on the part of the President or the Prime Minister to hold the provincial council (PC) elections this year.

He said it was highly unlikely that any election other than the presidential election will be held this year.

The PAFFREL Executive Director stressed that two days before the term of the review committee expired, the President dissolved Parliament before his move was challenged in court.

He also alleged that the last date for the review committee to submit their findings was 28 October and as the President dissolved Parliament on 26 October, the committee was also dissolved.

The usual practice is to reappoint the committee, but that did not happen, he said.

Highlighting two ways the Government could hold the PC election this year, Hettiarachchi said the President could gazette the previous delimitation report, ignoring the complaints made against it, after which, the Election Commissioner could hold the election or Parliament could postpone the date of enactment of the new Act to sometime in 2020. This will be the new date on which the Provincial Councils Elections (Amendment) Act No. 17 of 2017 will come into effect.

“If that is done, the previous Act will automatically be applicable, and then the PC election could be held under it,” he stressed.

“But I don’t think the present Government would go ahead with either of those options,” Hettiarachchi said.

“The Government had excuses for the postponement of the local Government and PC elections. They said the delay on part of the delimitation review committees caused the delay in the elections. But none of those excuses apply to the presidential election.

Therefore, the Government has no option but to hold the election before 9 December,” he said.

“After the presidential election is held in December, whoever comes into power should hold the parliamentary election as soon as possible, and also the PC elections,” he added.

Unlike the election culture of Mahinda Rajapaksa’s Government which held election after election, which was mostly criticised as a practice that wasted public funds, the present Government did the opposite as it held only one election after it came into power.

Meanwhile, Election Commission Chairman Mahinda Deshapriya stressed that his commission was ready to hold any elections, be it presidential or general. He also stated that the elections should not be delayed due to the security situation as it is not a valid reason for a delay.

When The Sunday Morning contacted Election Commission Director General Saman Sri Rathnayake, he said the presidential election must be held between 9 November and 9 December.

“We need only eight to 10 weeks, which is roughly three months’ time, to prepare for an election,” he said.

Earlier, the Election Chief stated that the commission would issue the notice calling for nominations, on or after 1 October. He also stated that the nomination period can be fixed for around 20 October, because as per the law, the earliest date to schedule the election is 15 November and the last date is 7 December, after considering holidays as well.

However, even though the Election Chief is very confident that the presidential election would be held this year, the President is yet to make any official statements regarding the election.

During his recent visit to India, he had stated that the election would most probably be held on 7 December, but this has not been communicated to the Election Commission.

Even though the Government is yet to make a statement about the upcoming election, all the political parties are busy picking presidential candidates.

The Sri Lanka Podujana Peramuna (SLPP) said the party would decide on the candidate and make the public announcement by October.

UPFA MP Chandima Weerakkody stated that the next presidential candidate should be someone who had the blessings of Mahinda Rajapaksa.

Meanwhile, the SLFP handed over a letter requesting President Maithripala Sirisena to contest at the upcoming election. SLFP MP Dayasiri Jayasekara denied reports that the President had said he would not contest again, saying it was fake news.

The UNP and JVP have not made any public announcements yet, but UNP supporters predict Speaker Karu Jayasuriya or Deputy Leader Sajith Premadasa as the next presidential candidate.

The name of prominent business leader Dammika Perera is also being discussed in the political arena as the UNP candidate, while former Defence Secretary Gotabaya Rajapaksa is favourite to become the SLPP candidate. However, all these rumours are yet to be clarified by the respective political parties.

When contacted, the Ministry of Internal and Home Affairs and Provincial Councils and Local Government Secretary Gamini Seneviratne said the Ministry had not discussed anything pertaining to the elections so far.

“Currently, we are discussing the preparations for the Poson celebrations,” he added.

February 28, 2021 byNews Admin No Comments
As the Government agrees to purchase paddy from local farmers competitively with the private sector, concerns have now been raised over the possibilities of a dramatic increase in rice prices..

April 18, 2021 byNews Admin No Comments
With a considerable amount of the world population having received the full dosage of the Covid-19 vaccine, or at least the first dose, the Director General of Health Services (DGHS) has issued update