UNDECIDED – Will Afghanistan tour Sri Lanka or not? 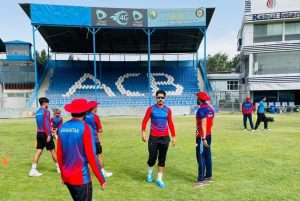 Afghanistan national cricket team working in their last stage of training in Kabul on Wednesday (18) in order to prepare for the upcoming three-match ODI series against Pakistan, which is to be held in Hambantota next month

* Completes training ahead of tour of Sri Lanka

* Changes in the Afghan board hierarchy

The Afghanistan national cricket team players have started their last-round of training for their tour of Sri Lanka, where they are scheduled to play three One-Day Internationals (ODIs) against Pakistan.

The three matches are scheduled to be held following bio-security protocols behind closed doors at the Hambantota Mahinda Rajapaksa International Cricket Stadium.

The games are scheduled for 1, 3, and 5 (Wednesday, Friday, and Sunday) of September.

But, can the Afghan national cricket team fly from their capital city Kabul to Colombo due to the volatile political situation now prevailing in their country?

It was early this week that Taliban seized Afghanistan’s control when the previous Government crumbled and former President Asfraf Ghani fleeing the country.

“Afghanistan is currently battling out with the dread of Taliban invasion as the clouds of uncertainty loom over the country’s future. The Taliban invaders have taken full control of the nation, including all the cricket stadiums in the country which has put a question mark over the future of Afghanistan cricket.

“The national team is scheduled to play a series against Pakistan in Sri Lanka, starting on 1 September. But, with air restrictions in place, the Afghanistan cricket team faces a travel crisis as the tour approaches,” reported Inside Sports in India on Tuesday (17).

“While Afghanistan’s star cricketers, Rashid Khan and Mohammad Nabi’s immediate cricketing future is uncertain, reports suggest that the Afghanistan Cricket Board (ACB) is constantly working to minimise the damage, at least to the sporting realm,” the report further added.

A senior ex-co official of Sri Lanka Cricket (SLC) told the Morning Sports on Monday (16) that they have not heard officially anything from the ACB till then about the latest developments.

“At this moment of time, we’re not sure (of going ahead with the series in Hambantota,” he added.

It was on the same day Monday that Taliban reached Kabul after a long journey from the peripheries of the country in a lengthy military advancement that eventually ended up successfully toppling the Government.

As per their latest news update, the ACB officials are reportedly working for the successful operation of the upcoming bilateral series against Pakistan.

Afghanistan and Pakistan were scheduled to play the three-match ODI series originally in the UAE.

The Afghanistan team will have a new Batting Coach in former Sri Lanka player Avishka Gunawardene, the ACB announced on Tuesday (17) amid the turmoil.

“Former Sri Lanka batsman and Coach Avishka Gunawardene has been appointed as Afghanistan national team’s Batting Coach,” the Afghanistan board had tweeted.

As per the ACB Constitution, the President of the country is the Patron-in-Chief and the Chairman is the Head of the board. Reports suggest that Azizullah Fazli, whose tenure ended after the International Cricket Council (ICC) 2019 World Cup, will take over as the new ACB Chairman.

He will replace Farhan Yousefzai. However, the current ACB CEO Dr. Hamid Shinwari is the central authority on the board and takes care of cricket operations and administration.

Fate of their World Cup participation

The eighth edition of Afghanistan’s domestic T20, Shpageeza Cricket League, which is scheduled to be held in Kabul in September 2021, is also doubtful due to the prevailing political situation, some reports said.

With Taliban taking over Afghanistan following the withdrawal of American troops from the country, there are speculations over whether their national cricket team will be able to take part in the international tournaments, especially the ICC Men’s T20 World Cup set to be played in October and November.

However, Afghanistan cricket team’s Media Manager Hikmat Hassan had assured that they will be part of the T20 World Cup with the preparations to go ahead as planned, despite what’s happening in the country.

Sri Lanka, venue for the tri-series too?

“Yes, we will play in the T20 World Cup,” Hassan told ANI. “The preparations are on and the available players will be back to training in Kabul in the next few days.”

He also added that they are currently searching for possible venue for a tri-series involving Afghanistan, Australia, and West Indies.

“We are looking for a venue for the tri-series involving Australia and West Indies and that will be the best preparation for the showpiece event. We are speaking to some countries like Sri Lanka and also I think of Malaysia. Let’s see how that pans out,” he had further said.

On This Day – 1 October: Remember “The Thrilla in Manila”?

October 5, 2018 byRevatha No Comments
England win their first practice game against SL Cricket Board XI under DL Method at P. Sara on Friday.

Undecided: Will Afghanistan tour Sri Lanka or not?