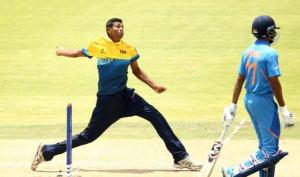 In Bloemfontein on Sunday, in what turned out to be a disappointing game for Sri Lanka Under-19 cricket team as they went down to India by 90 runs in their World Cup opener, one particular moment might have brought home a world record for the Islanders.

In the 4th over of the Indian innings, fast bowler Matheesha Pathirana bowled a wide delivery to Yashasvi Jaiswal, which was recorded at 175kph (108mph), making it the fastest recorded ball ever bowled in international cricket – across all levels.

Even though the umpire signaled a wide, the speed-gun recorded the astronomical pace of the delivery as it zoomed past Jaiswal and into the wicketkeeper’s gloves. Before this, the fastest ever recorded delivery in international cricket was bowled by former Pakistan speedster Shoaib Akhtar when he let one rip at 161.3kph (100mph) in an ODI vs England during the World Cup 2003.

Here are the top-3 fastest balls bowled in the history of senior international cricket:

Though fears of a technical error haunting the speed-gun started surfacing, there has been no official denial or correction from the ICC regarding the same. This means that the 17-year-old Pathirana can for now lay claim to the world record.

However, this is not the 1st time that Pathirana has grabbed headlines owing to his bowling. The lanky pacer’s action which seems to be modeled on that of the great Lasith Malinga took 6 wickets for just 7 runs in a college game in September 2019. Playing for Trinity College, Kandy, Matheesha Pathirana could be seen bowling deadly yorkers to fox the batsmen.

In the video, it is evident that Pathirana bowls with a similar slinging arm like Malinga’s. Also, his pinpoint yorkers rattling the stumps are quite reminiscent of Malinga disturbing the furniture behind the batsmen quite often in his heyday.

It is also surprising that Pathirana did this in his debut match for Trinity College. If the young pacer can continue like this, it shouldn’t be a surprise that he could be seen in the senior team in the very near future. indiatoday.in

January 14, 2019 byRevatha No Comments
Chittagong Vikings withstood Thisara Perera's blistering assault at the end of the first innings to pull off a thrilling chase of 185