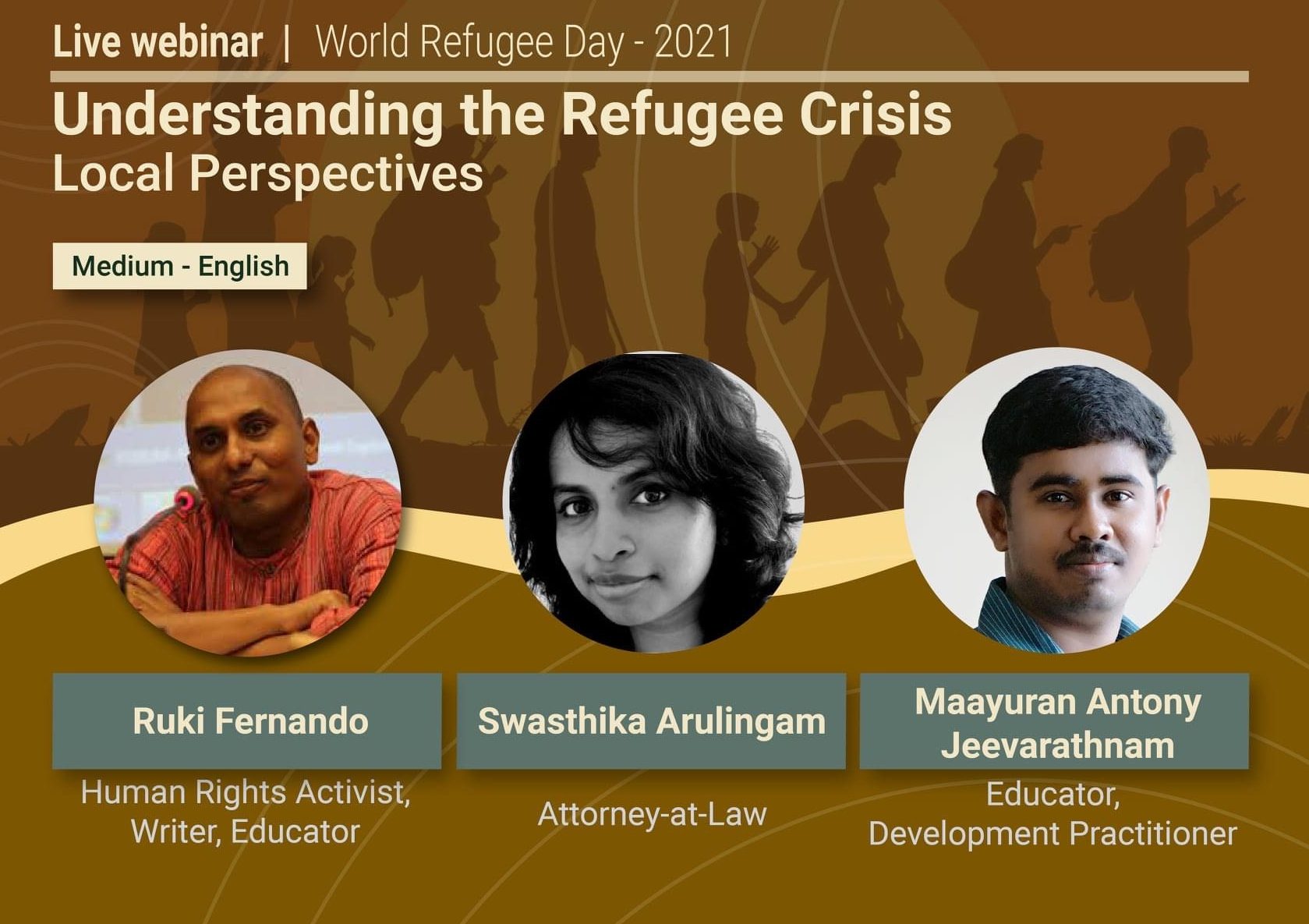 Understanding the refugee crisis from a local perspective

June 23, 2021 by Dimithri Wijesinghe No Comments

In commemoration of World Refugee Day, Hashtag Generation – a youth-lead movement advocating for full and effective participation of young people in policymaking, implementation, and evaluation – hosted a much-needed discussion on understanding the refugee crisis from a local perspective, on 20 June via Facebook and YouTube Live.


The panellists shared that according to statistics of the United Nations High Commissioner for Refugees (UNHCR), there are 82.4 million people who are forcibly evicted from their homes globally and almost 26.4 million of them are refugees. Sri Lanka, having been a country muddled with conflict in the past, has produced almost one million refugees post-independence.


However, despite having contributed a large number of refugees, our country has remained passive when it comes to addressing the prevalent refugee crisis.


One of the panellists, Jeevaratnam, who is a Sri Lanka national, has lived in exile as a refugee in India for 25 years and he stated that while there is much debate as to whether we should accept refugees, develop policies to provide them protection, etc., surely, we can all agree that no one should have to live the life of a refugee, particularly someone from your own country.

Why is it significant to us as Sri Lankans?

We spoke to Arulingam on this matter as to why Sri Lanka should address this matter of refugees, especially when we are not a signatory to the United Nations Convention on Refugees and are currently not a country that offers permanent asylum, as we are only a transit country to refugees.


Arulingam stated that despite us not being party to the convention, the UNHCR in Sri Lanka offers a certain level of protection to asylum seekers, where they are given an interim certificate identifying their asylum seeker status, which is a temporary status and must be renewed annually, until their case is processed and they are eventually afforded the status of refugee, following which they will remain legally in Sri Lanka until they can be settled permanently in a country which affords refugees settlement.


She said that this process is not in any way a neat and perfect system, and it takes a long time, and the refugees, in the meantime, must rely on the stipend given to them by the UNHCR, as they cannot work here. However, they are technically provided with healthcare and their children are afforded access to free education, but there are certain social barriers in accessing these services.


She stated that there are a lot of biases and prejudices with regards to refugees and asylum seekers. One major thing is the belief that they are burdening our system, i.e. taking our jobs, using up our resources, etc. However, she commented that refugees, in fact, contribute to the system, often at the risk of being exploited, notably due to the lack of policies.


She added that she has come across many occasions where refugees get entangled in our criminal justice system and are left in incredibly difficult situations, because they don’t have sufficient legal protection.


She further noted that Sri Lanka, being an island and a developing nation, does not on average attract a great number of refugees, but on occasions that we do, there is no system in place to provide them assistance.


She said that the point here is that despite not having signed the convention, we as a country have produced a large number of refugees and other countries have been kind enough to host our people when our country was excluding them. One-third of the million refugees we’ve produced were those who were unable to access asylum in European countries who then sought to flee to India in boats, and have lived on the welfare systems afforded by the country since. Though India too is not a signatory to the UN convention on refugees, Sri Lankan refugees in India have received assistance via a multitude of administrative circulars.


Arulingam said that other countries were kind enough to host our people, and some such individuals who sought asylum have since permanently settled in those countries, adding that it is a duty of our State to return the kindness. “We have an obligation to afford the same kindness and extend that courtesy,” she said.

August 30, 2021 byNews Admin No Comments
Tattoo tech, similar to regular tech, is an ever-advancing field, and thanks to these advancements, we tattoo artists have been able to give life to body art that was once thought impossible. Probably

Sri Lanka through a lens: Santhush Weerakoon talks about his viral capture and more

January 14, 2021 byRusiru Keppetipola No Comments
Santhush Weerakoon is a banker by profession and a travel photographer by passion. Recently, Weerakoon embarked on a journey to Maskeliya town in Sri Lanka’s Central Province, where he captured..