UNHRC | Base vote insufficient to prevail at a vote: Dr. Dayan Jayatilleka

March 7, 2021 by Lahiru Pothmulla No Comments

Sri Lanka seems to have retained its base vote of about 10 member states at the UN Human Rights Council (UNHRC), but that base vote is insufficient to prevail at a vote, said former Ambassador to Russia Dr. Dayan Jayatilleka. 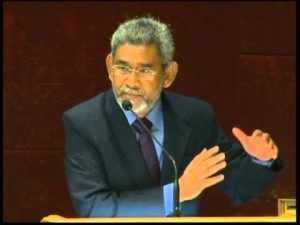 Dr. Jayatilleka, who served as the Permanent Representative of Sri Lanka to the United Nations in Geneva, spoke to The Sunday Morning on the ongoing UNHRC session and the scheduled Core Group Resolution.

He highlighted three facts that needed to be considered in the upcoming vote on Sri Lanka.

The first factor is the High-Level Segment, where the leaders and foreign ministers of countries addressed the UNHRC.

“What was important there was that US Secretary of State Antony Blinken mentioned the resolution on Sri Lanka and used the phrase ‘lack of accountability for past atrocities in Sri Lanka’.

“Now, we must not be misled by the figure 21. UNHRC has 47 elected members who have the right to vote. The 21 who spoke in favour are not all members of the UNHRC. The number of member states out of 21 were nine or 10. A maximum of 10 out of 47 have defended Sri Lanka,” he said.

“You can’t use the same yardstick, because the people who spoke defending Sri Lanka from the criticisms of the High Commissioner’s report may not all hold the same view concerning the draft resolution on Sri Lanka. The High Commissioner’s report is quite strongly worded, whereas the resolution is, on the surface of it, to say apparently, worded in far more moderate language, and the resolution is only at the draft stage.

“Now, there is an ongoing process called the informal consultation, and the resolution may be further diluted or strengthened. We can’t really say that the same numbers of those for and against the High Commissioner’s report will be available concerning the resolution, because the resolution is somewhat differently worded. So, those are the main things.

“What I would conclude from the 10 member states that spoke in defence of Sri Lanka is that Sri Lanka still retains the base vote, but that base vote is insufficient to prevail at a vote. I’m not sure that Sri Lanka has managed to break out of those numbers and get anything like the numbers necessary to win which we had in 2009,” Dr. Jayatilleka said.

Meanwhile, he said the impact of the Bachelet report could have been lessened, had the Government of Sri Lanka (GoSL) followed the three efforts made by Prime Minister Mahinda Rajapaksa.

He said the Prime Minister appointed a committee to study the 20A and to make recommendations.

“If what the PM initiated had been accepted, then 20A would have been more balanced, and the High Commissioner couldn’t have pointed to 20A saying we don’t have an independent judiciary in Sri Lanka, and therefore, we have to have an international inquiry.

“The second was when he proposed to hold the PC poll as early as the Covid situation would permit, and the third was the burial of Covid victims. If the PM’s attempts to bury Covid victims had been accepted, we would not have that issue highlighted at the UN either,” he said.

Commenting on the bilateral relations between Sri Lanka and India, Dr. Jayatilleka said the 13th Amendment to the Constitution plays a key role in it; India’s position on it has not changed, although Sri Lanka’s position has.

Commenting further, he said: “President Mahinda Rajapaksa is a very good strategist, and his strategy was to win India over so that India would buffer Sri Lanka from Western pressure to end the war. To do that, President Mahinda Rajapaksa made a very sincere promise to fully implement the 13A, and in fact to start a dialogue with the Tamil political parties to find a political settlement. So that was the position that President (Mahinda) Rajapaksa took.

“This view was not only conveyed by President Rajapaksa himself in person to (then Indian) PM Manmohan Singh, but it was also conveyed by the so-called ‘Troika’, the high-level representatives of the President who had continued dialogue with India during the war. The Troika also promised to implement the 13A, and after the war was won, President Rajapaksa’s promise was conveyed in two separate statements – by India on 21 May 2009, and in a joint statement with Ban Ki Moon on 23 May 2009. Both documents pledged to implement the 13A and have a political dialogue with the Tamil representatives to explore and continue the political solution.

“That was the stand of the GoSL, and that helped us greatly to keep India on our side during the war. Now, the GoSL is delaying implementing these. Personally, I think that President Rajapaksa fully intended to implement these, but within the system there were those who opposed it.

“Therefore, he was not able to implement it for a few years, and when he finally had PC elections, it was 2013. India felt that GoSL was not fulfilling its promises. India voted against Sri Lanka in 2012.

“Today’s situation is simple. There’s no complexity or confusion because the Indian Foreign Minister who came to Sri Lanka made a statement in which he clearly mentioned 13A as a separate point. Then, a few days ago, speaking in the interactive dialogue on the High Commissioner’s report, Indian representatives also made a statement saying India’s policy towards Sri Lanka rests on two pillars – one is the protection of territorial unity and integrity of Sri Lanka, and the other is the fulfilment of the aspirations of the Tamil people for justice, meaningful devolution, and full implementation of the 13A.

“India’s position is extremely clear; it has not changed and remains constant, but Sri Lanka’s position has changed. Today, you have ministers like Sarath Weerasekara openly saying we should abolish the 13A or the provincial council system; we have the Foreign Secretary in an interview saying that he doesn’t think that 13A is the answer.

“India is very clear that they think that we should stand by our promises to fully implement the 13A. Then the decision is up to us. If we want their support, we have to pay the price; if we don’t want their support and don’t mind them abstaining, then it’s okay to continue to say what we have said.

“What we are doing now is dodging the issue of 13A, and criticising the 13A, which is very clearly part of their bottom-line. Instead, we are offering them strategic parts of our infrastructure like the East Container Terminal or the West Container Terminal, instead of dealing with the main issue, which is the 13A. It would seem like India would abstain yet again,” Dr. Jayatilleka said.

Sunny Side Up: Message to Ranjan

September 4, 2021 byNews Admin No Comments
Former MP Ranjan Ramanayake, who is serving a four-year rigorous imprisonment term, has been informed that he has to agree to a condition in order to be granted a presidential pardon.

September 8, 2019 byThe Sunday Morning No Comments
At first glance, the draft unified employment legislation would look very promising to the new-age worker with employers required to adapt a non-discriminatory policy when employing persons,