March 7, 2021 by Lahiru Pothmulla No Comments 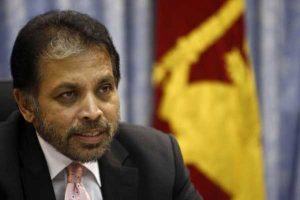 When contacted by The Sunday Morning to get his insight on the matter, the former Permanent Representative of Sri Lanka to the United Nations in New York said the High Commissioner’s report is meticulously detailed, painstakingly crafted, and scrupulously structured.

“But it is based on a multitiered edifice of lies, innuendo, and suggestion, which rest on previously debunked and seriously defective reports. To an impartial observer, its goal is obvious. It kindles hatred and stokes vengeance,” he said.

“It ignores the fact that Sri Lanka formally withdrew from the co-sponsorship of 30/1.  At this point, I recall the words of our great sage, the Buddha, ‘Hatred ceaseth not hatred, love ceaseth hatred’ – Nahi Verana Verani.

“This is what amazes me. She contributes to the now-familiar and orchestrated effort of some countries, influenced by a cabal of noisy lobby groups and NGOs, to embarrass Sri Lanka, to denigrate Sri Lanka. Against this background, it is difficult not to come to the conclusion that the High Commissioner, in her report, simply did not wish to assist a state member of the UN to improve its performance consistent with her mandate, but was determined to embarrass Sri Lanka and push it into a difficult corner,” he said.

“Let me ask the question why? Why was the High Commissioner’s report compiled in this manner? Towards the end of the conflict, (David) Miliband, then the UK Foreign Secretary, and (Bernard) Kouchner, then the Foreign Minister of France, visited Sri Lanka under pressure from the Tamil expatriate groups and a noisy NGO community, and almost demanded that Sri Lanka stop the military operation against the LTTE – a group that had terrorised the country for over 30 years, causing widespread death and destruction.

“The President refused to comply and, if I remember right, he told Miliband bluntly that Sri Lanka was no longer Britain’s colony, to be told what to do by its Foreign Secretary.

“We proceeded to defeat the LTTE and end the 30-year brutal conflict, and with it, terrorism. As is abundantly clear from Wikileaks, the UK and France were not alone. The US, Sweden, and Norway had this common goal. The rushed visits of Eric Solheim to Washington are all documented in Wikileaks.

“It is difficult to attribute a coherent reason for this affection for the LTTE by all these countries and their representatives, given that it had been proscribed by them. It is possible that it could have been purely humanitarian. But why is this bleeding-heart humanitarianism not manifested elsewhere? In Afghanistan, in Iraq, in Yemen, or Libya?

“What was so special about Sri Lanka – a country that eliminated a ruthless terrorist group? Where children are no longer recruited by the terrorist group for combat purposes; where child soldiers are no longer given cyanide capsules by their terrorist minders; where underaged girls are not married off early to avoid being recruited; where places of worship are not blown up, killing hundreds; where democratically elected political leaders are not assassinated at random; where mothers don’t wait anxiously for their children to return home without being blown to bits by a roadside bomb; where husbands and wives do not travel together to avoid making their children orphans.

“Let us for a moment assume that these were not the key motivating factors. Then why was the High Commissioner’s report filled with innuendo, insinuation, and suggestion?

“Let me take a few examples; I am not going to go through the entire report of the High Commissioner. I could, but it has been done in the Government’s response, which has been all but ignored, along with its withdrawal of the co-sponsorship of 30/1.

“The Report starts off by averting to credible allegations of indiscriminate shelling and 250,000 people being interned for months.

“Immediately a few questions arise. Credible? Credible in whose eyes? In the eyes of those making the allegations? A number of contemporary reports have emerged, including by the military attaches of the UK and the US. Lord Naseby has read Gash’s reports in the House of Lords. They do not speak of indiscriminate shelling.

“Has the High Commissioner even considered the views of the Eminent Persons’ report? They dismiss the allegation of indiscriminate shelling. Geoffrey Nice QC. Rodney Dixon QC, Desmond Silva QC, among others, were in this group. The resident doctor’s statements? Have these been taken into account? In any event, the High Commissioner has not considered whether the retaliatory strikes by the military were necessary and proportionate. But her report highlights the allegation made by nondescript entities.”

“Then the statement continues that the refugees were detained for months in camps. What would the High Commissioner have preferred? For them to live in humpies in the elephant-infested jungles? Like the millions who live in makeshift camps in Yemen, Syria, and Libya? You would have seen this on CNN reports in the last couple of days. Children with distended bellies and sunken eyes being thrown bottles of water from passing four-wheel drives of do-gooding NGOs. Is that what she would have preferred?  Instead, those in our camps were fed three times a day, given medical care, children had their schooling, and they had proper shelter.

“In any event, over a thousand square kilometres of land had to be cleared of indiscriminately laid landmines. The LTTE had removed the roofing material of the houses, as they herded the people with them, while they retreated before the advancing military.

“The metal roofing sheets were melted to make pellets for their IEDs. The people had no houses to go back to. A quick inquiry from Miliband would have revealed this. He visited those so-called internment camps with me. Or is it more convenient to follow the Nazi Goebbels’ dictum: ‘Repeat a lie often enough, it becomes the truth’?

“The report is critical of military officers who have been assigned responsibilities in government departments and institutions. Sri Lanka is not unique in employing retired soldiers in high positions. Other countries have had presidents who were retired soldiers. In any event, our retirement age for senior officers is 55 years, an age when a man is not considered to be old anymore. It is difficult to imagine for a poor country like Sri Lanka to waste the talent, experience, and the skills of a military officer retiring at age 55.

“I find it difficult to understand the emotive expression ‘majoritarianism’ employed by the High Commissioner. In a democracy, it is the majority that elects a President or a Government. It would be self-destructive for a leader of a Government, so elected, not to reflect the views of the majority.

“The LTTE strategy appears to have been simply to keep the civilians as a human shield. This provided the context for most of what happened in the final stages of the war. In the first instance, it was assumed that the human shield would slow the progress of the military.

“Secondly, a few civilians’ deaths would force the international community to intervene and save the LTTE, Thamilselvan had said so on record.

“Failing all else, it would provide the basis for war crimes allegations once the conflict ended. This would have been particularly useful, if the plan to airlift the LTTE leadership out of Pudumathalan had succeeded.

“The LTTE, and now the High Commissioner’s Report, ignored the fact that the UN Secretary General, the US Secretary of State, and many others had called on the LTTE repeatedly to let the people go. They refused to heed this call.

“Against this background, it is difficult not to come to the conclusion that the High Commissioner, in her report, simply did not wish to assist a state member of the UN to improve its performance consistent with her mandate, but was determined to embarrass Sri Lanka.

“Her task is to work with member states to advance human rights, not to act as prosecutor and judge. It is difficult for a country to defend itself against unsubstantiated allegations and insinuations. No domestic legal system would permit that.

“The High Commissioner’s office appears to have, over the years, misunderstood its role. The Council was never established to isolate countries and chastise them individually. It was designed to help countries improve their human rights performance. The Council’s job is to assist and to encourage, not to punish.

“This was the objective of those who created the Council in the first place, having terminated its predecessor, the Human Rights Commission. The High Commissioner has no authority to enforce Council resolutions. Now, she turns to helpful countries to enforce principles which have never been endorsed by the international community as a whole.

“The High Commissioner’s report even suggests punitive measures, in other fora, perhaps to bring Sri Lanka to heel, or to make it an example.  Again, it would seem that the report mistakes her role and plays into the hands of those wishing to punish Sri Lanka. As to whether this is consistent with the High Commissioner’s role is hugely doubtful. This reeks of vengeance, seeking hatred.

“It is also important to remember that Sri Lanka’s culture is not based on the values of ‘an eye for an eye’ or ‘tooth for a tooth’. Our culture is based on the principles of forgiveness and forgetting, not confessional atonement and the justice of the inquisition.

“It may be difficult for those imbued with these age-old western concepts to understand this, but let’s remember that the world consists of a range and multiplicity of cultural traditions and principles. That is why the Sri Lankan Lessons Learnt and Reconciliation Commission (LLRC) adopted a restorative justice approach rather than a punitive justice approach, even for those who may have violated basic norms.

“Restorative justice takes time. It is not without reason that 12,000 former combatants were rehabilitated to their families. For us, meting out justice does not necessarily mean meting out punishment. History is replete with situations where punitive justice did not succeed in achieving reconciliation, while restorative justice has produced results in almost every instance, for example in South Africa and Uganda.

“Since the end of the conflict, the Sri Lankan Government has adopted extensive measures to achieve reconciliation. Most land occupied by the military has been returned to the original owners; most infrastructure destroyed during conflict including railway lines, roads, schools, fisheries harbours, temples, and community facilities have been restored.

“The railway tracks and the sleepers had been used by the LTTE to construct bunkers. Hundreds of missing persons have been accounted for. Much more needs to be done, but we are a poor country. It will take time. There are other parts of the country, in addition to the North and the East, which need to be developed as well. Our resources are limited and fresh funds are required. I wish the High Commissioner’s report had also spared some thought for these aspects as well, instead of purely searching feverishly for guilty parties to punish.

“Those who seek vengeance will have vengeance trailing them to eternity,” Dr. Kohona said.

Sunny Side Up: G.L.’s predicament