UNHRC puts Sri Lanka’s rights record back in the spotlight

September 17, 2018 by The Sunday Morning No Comments 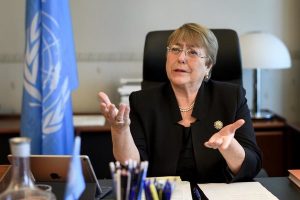 The UN Human Rights Council (UNHRC) has put Sri Lanka in the spotlight once again despite Sri Lanka not being on the agenda.

The new UN High Commissioner for Human Rights Michelle Bachelet raised concerns on Sri Lanka in her first speech to the council.

As the 39th session of the council goes into its second week, human rights groups and NGOs are preparing to put more pressure on the UNHRC to go all out against Sri Lanka. The council is meeting without the United States, which pulled out of the UNHRC accusing it of being biased.

The US was often a strong voice against Sri Lanka and initiated resolutions both against and in support of the country.

Human rights groups and NGOs are holding meetings in Geneva on the side lines of the 39th sessions of the Human Rights Council to build support against Sri Lanka.

The International Truth and Justice Project (ITPJ) is also preparing to release a report in Geneva on Sri Lanka. The report is to be released on 19 September in Geneva and will focus on male survivors of conflict-related sexual violence in Sri Lanka.

In her opening statement last Monday at the sessions, Bachelet said that in Sri Lanka, more progress in advancing accountability and truth-seeking could have great weight in the long-term stability and prosperity of the nation.

Bachelet also stated that recurrent incidents of racist and inter-communal violence are disturbing, as are announced plans to resume the implementation of the death penalty.

Later during the week, the UN Working Group on Arbitrary Detention submitted a report to the UNHRC which contained information on its visit to Sri Lanka last December.

The report noted that the working group visited over 30 places of deprivation of liberty, including police stations, prisons, immigration detention facilities and entry ports, army and navy camps, homes for children, women and the elderly, institutions for persons with psychosocial disabilities, rehabilitation centres for ex-combatants, and centres for treatment of drug dependency.

It was able to confidentially interview over 100 persons who are currently deprived of their liberty, the report said.

The Working Group was informed of many positive changes that were being made across Sri Lanka in relation to the deprivation of liberty, including the entry into force of the Optional Protocol to the Convention against Torture, on 4 January, 2018.

However, throughout its visit, the group observed instances of deprivation of liberty being the automatic response by the authorities to a wide variety of situations in which deprivation of liberty was not absolutely necessary or prescribed by law. Notably, the group identified systemic problems within the criminal justice system which placed defendants at a high risk of arbitrary detention.

The Working Group identified systemic problems with deprivation of liberty for rehabilitation purposes, including with regard to rehabilitation of women, ex-combatants, drug-users, and other vulnerable persons.

They also learned of several situations in which people were being deprived of their liberty, or were at high risk of being detained on discriminatory grounds.

The UN Working Group urged the Government to find affordable alternatives to detention for the most vulnerable members of society.

The Working Group observed the ad hoc nature of arrangements regarding asylum seekers in Sri Lanka, as well as the dire conditions in the Mirihana immigration detention facility.

“It should be recalled that detention in the context of migration proceedings must be an exceptional measure – alternatives to detention must be duly considered – and when detained, that migrants must be held in appropriate facilities which respect their inherent dignity,” the Working Group said.

PTA not yet abolished

It also raised concerns over the failure to abolish the Prevention of Terrorism Act (PTA).

In response, the Government informed the UNHRC that the draft Counter Terrorism Act (CTA), aimed to replace the PTA, consistent with human rights safeguards and international standards, has evolved.

“With approval by the Cabinet of Ministers, the draft legislation will be presented to Parliament, in accordance with the established procedure. The GoSL engaged with several international stakeholders including the UN Counter-Terrorism Executive Directorate, the OHCHR, and the ICRC in formulating the draft CTA. It is pertinent to mention there were civil society representatives involved in the drafting process and that a wide range of views were taken into consideration and international expertise sought,” Sri Lanka’s Ambassador and Permanent Representative to Geneva A. L. A. Azeez said.

He said that the process of engagement and dialogue will continue and amendments can be introduced during the sectoral oversight committee and committee stage consultations.

“In the meantime, since July 2017, a de facto administrative moratorium preventing new arrests under the PTA remains in effect and all persons who had been arrested under the PTA are being held under judicial detention. There are at present 58 persons against whom charges have been framed and trials are proceeding, while five persons are awaiting indictments following assessments to be concluded shortly by the Attorney General,” he added.

Meanwhile, members of the Sri Lanka core group told the UNHRC that the pace of progress in Sri Lanka on important areas remains slow.

The core group said that as time passes, lack of progress in delivering key steps risks undermining reconciliation efforts. The statement was delivered on behalf of Germany, Macedonia, Montenegro, and the UK.

The core group welcomed recent steps Sri Lanka had taken to implement commitments made to the council in 2015 and 2017.

“We welcome the Government’s continued engagement with the UN system and actions to implement its National Reconciliation Action Plan and Peacebuilding Priority Plan. We applaud the Office on Missing Persons’ commencement of work and encourage everyone able to advance or contribute to its work to do so. We hope the Government will establish an Office for Reparations quickly. We also welcome the return of further private land in the north, and commitments to return more military-occupied land to civilian ownership,” the core group on Sri Lanka said.

Nonetheless, they said the pace of progress on important areas remains much slower than many hoped for.

“In co-sponsoring resolution 30/1, Sri Lanka recognised that national accountability mechanisms are essential to dealing with the past, and to restoring confidence among its communities. These have yet to be established. The Prevention of Terrorism Act has not been replaced with a law that accords with international standards,” the statement said.

The core group said that though processes to consider reform to important provisions of the Constitution, including devolution of political authority, have been on-going since 2016, a way forward has not been found.

“We are concerned by recent reports of harassment and attacks on human rights defenders. Our view remains that, with determined leadership and a clear time-bound action plan, this Government can make more progress towards delivering its council commitments, and that doing so will better position Sri Lanka and its people to enjoy a more enduring reconciliation and prosperity,” they said.

The core group urged Sri Lanka to prioritise and drive forward implementation of resolutions 30/1 and 34/1, before the council next considers Sri Lanka in March.

Arson should not be used to medicalise cases of social problems: Study

October 14, 2021 byNews Admin No Comments
Arson should not be seen as a case of medicalising a social problem, especially in light of there being certain fire-setters who are not suffering from psychiatric illnesses, but start fires for finan

October 19, 2021 byRuwani Fonseka No Comments
The Samagi Jana Balawegaya (SJB) has revealed that the rejected fertiliser from China is still en-route to Sri Lanka, and that the ship carrying the fertiliser has not turned back.