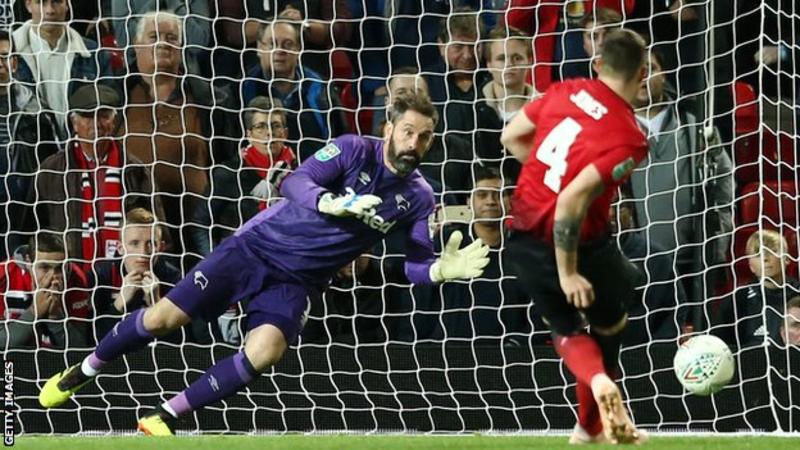 Derby County beat Manchester United 8-7 in a dramatic penalty shootout to settle a pulsating Carabao Cup tie at Old Trafford and send the Championship club through to the fourth round.

In an incident-packed tie, United took the lead through Juan Mata’s first goal in nine months before Harry Wilson – on loan from Liverpool – equalised with a brilliant dipping free-kick from 30 yards.

United keeper Sergio Romero, making his first appearance of the season, was sent off for handball before Jack Marriott’s header put Derby 2-1 ahead.

The hosts needed a 95th-minute header from substitute Marouane Fellaini to send the match to penalties.

Lampard, who played under United boss Jose Mourinho at Chelsea, celebrated with his players on the pitch in front of 3,000 travelling fans after knocking the five-time winners out.

All not well in the United camp

Before the end of September, Mourinho’s United find themselves out of the League Cup and languishing seventh in the Premier League – eight points behind leaders Liverpool.

This was their first domestic cup tie since losing last season’s FA Cup final against Chelsea, which ensured they ended the season without a trophy.

Mourinho made nine changes to the team held by Wolves last weekend – Romelu Lukaku and Jesse Lingard the only survivors.

Paul Pogba was among the United players not involved at all. The £ 89m World Cup-winning midfielder watched from the stand after it emerged Mourinho had told him he will not captain the club again because of concerns about his attitude.

In his programme notes, Mourinho said he was unhappy with some members of his squad.

Ashley Young was handed the captain’s armband but, after Mata’s first-time shot gave United an early lead, their evening nosedived.

Romero’s red card after rushing out of his penalty area and handling the ball to deny Wilson at 1-1 proved pivotal.

Third-choice keeper Lee Grant, who had two spells at Derby, came on for his first appearance for United since joining from Stoke.

May 5, 2021 byRevatha No Comments
Stays at cricket headquarters for almost six hour!

October 28, 2020 byRevatha No Comments
SLC as the organisers of the Lanka Premier League yesterday (27) revised its tournament schedule