December 11, 2020 by Nethmi Liyanapathirana No Comments

In the mid-1980s, Singapore’s “Sim Lim Tower” was an unremarkable building – a $ 30 million project housing a few distributors of TVs and printers. Taken over by a new management by the name of “Sim Lim Realty” in 1987, Sim Lim Tower was transformed to “Sim Lim Square”, an ambitious, six-storey, $140 million project. Today, it is an imperative part of Singapore’s IT industry – its name is synonymous for a treasure trove of cutting-edge IT gadgets and gizmos – with a personality of its own that lives and breathes with the hordes of locals and tourists that pass through it every day. Now, 33 years since that achievement of Sim Lim Realty, Sri Lanka’s very own Lanka Realty Investments (LRI) looks to replicate that transformation, with the once popular Unity Plaza. 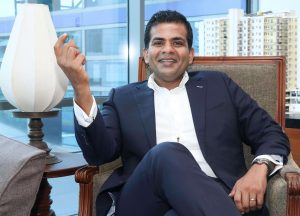 In Sri Lanka, regardless of your level of tech expertise or enthusiasm, Unity Plaza is the name that comes to mind if you’re looking to make your next IT purchase. However, it’s not the most welcoming space. A labyrinth of silicon and cement, it is not the easiest or most enjoyable mall to navigate through in Sri Lanka – and a shopping trip to Unity is little more than a come-and-go experience for most of us. LRI’s plan is to turn this space into a hub of technology that will attract consumers for reasons not limited to just purchases, but a holistic experience that goes beyond traditional shopping for IT goods.

The plan is to make it Colombo’s most popular IT retail and distribution space, apart from making it a profitable real estate venture.

“We’re looking to transform the entire outlook of this space, taking advantage of an established location for IT wholesale and distribution, and turn it into a locale that is comfortable for the customer and the occupier,” said LRI Co-Founder and Executive Director Hardy Jamaldeen.

It is a bold move in the face of economic slowdown and the rapid advancement of the digital revolution. But it presents LRI with a chance to position themselves at the forefront of real estate brokers in Sri Lanka as well as real visionaries who can transform spaces not just for profitability of investors, but also to provide an attractive experience for consumers and occupants. It is an initiative that can be both ROI-positive, substantially boosting consumer satisfaction. As retail spending continues to shift online, focused on delivery-based services, when consumers today visit malls, it is clear they are looking for experiences that go beyond the traditional shopping experience.

LRI, which as a group includes construction material business Amtrad Ltd. as well as leisure interests, has assets worth Rs. 11.6 billion at the end of this fiscal year. If LRI’s eye for potential and track record of turning grade B assets into grade A cash cows with a high ROI and is anything to go by, both consumers and investors will have something to look forward to in the near future.

McKinsey, in a report from 2018, notes that the growing middle class in Asia and Latin America still maintain a strong association between consumption and pleasure. Sri Lanka in particular, with an aging population and increased urbanisation, presents a population which will have a greater need for space in which to socialise and congregate, following the end of the pandemic. The On’ally Holdings PLC management and the renovation of Unity Plaza, while commendable, were outdated and misplaced.

The rentable space of Unity Plaza (excluding Bank of Ceylon premises) is 77,600 square feet. Jamaldeen noted that previous owners (On’ally) attempted to convert the office space into a profitable venture for the past 20 years, but to no avail. For example, in their annual report 2019/20, On’ally wrote that via funds raised through a Rights Issue, it attempted to renovate the space for profitability. Here, Rs. 2.8 billion was allocated for renovation for just the retail space on the second floor. As Jamaldeen noted, however, while the four floors of retail space in the building generated close to Rs. 155 million in revenue in the last fiscal year, the remaining six floors of office space generated a meager Rs. 45 million. Jamaldeen further stated that converting the upper office floors into an attractive and modern space is imperative towards the efforts to transform the entire outlook of Unity Plaza.

Looking towards the future, LRI noted that investors are seeing the “end times” of Covid-19’s impact on the economy and that moves made in the next nine to 12 months will be critical for spurring Sri Lanka’s struggling economy and attracting the flow of foreign capital into the Colombo Stock Exchange (CSE).

LRI’s takeover is the largest post-Covid transaction on the CSE, with hopes of reigniting Sri Lanka’s sluggish capital market amidst the worry surrounding the ongoing pandemic. With the deal closing as the CSE struck the bell to commemorate its 35th anniversary, the All-Share Price Index (ASPI) ended the day going up by 17.26 points and the S&P up by 8.81.

“The time is now,” noted Jamaldeen, and he hopes that not only high-value investors will participate in the real estate boom that is about to take place in Sri Lanka, but a diversified range of investors, both domestic and foreign, will be drawn towards investing in Sri Lanka’s “growth story”.

Jamaldeen remarked that LRI looks to capitalise on the provisions of the Budget 2021 which creates a favourable environment towards business, specifically for those in the real estate industry. Jamaldeen further noted that the positive environment created for business will be key to developing not just the future of LRI, but all businesses in Sri Lanka over the next five years as they look to attract foreign capital and channel it towards the CSE.

April 26, 2022 byNews Admin No Comments
According to American economist Steve Hanke yesterday (25), as of 21 April 2022, inflation in Sri Lanka reached the third position in the weekly global inflation dashboard computed by him and John Hop

Hyuandai enters into agreement with Abans Auto following discussions since 2020
Plant incorporates latest technologies and is of industry 4.0 standard