UNP to take legal action against Prez’s move on SLRC 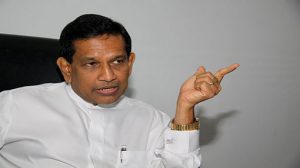 UNP will take legal action against the President’s decision to bring the Sri Lanka Rupavahini Corporation (SLRC) under the purview of the Defence Ministry, Health Miniter Rajitha Senaratne told the Sunday Morning.

“It can be an internal matter, I really do not know. I also do not want to create an issue between the President and the Prime Minister. My intentions are always to bring them together”

On 10th September a gazette notification was issued by the presidential secretariat to bring SLRC under the Defence Ministry.

Media Minister Ruwan Wijewardene following the gazette notification condemned the president’s move and said he was not informed nor consulted as Minister in charge.

Wijewardene and media movements alleged that the president’s move was based on garnering advantage in the forthcoming elections.

August 17, 2021 byNews Admin No Comments
People go to great lengths to feel good about themselves, and the more they succumb to that urge, the less attention they pay to the pros and cons of what they do. Sometimes, this urge can even drive

July 24, 2021 byNews Admin No Comments
Private universities and what they stand for, as well as the contribution various private universities make to the education system in the country, has taken centre stage over the past few years and i