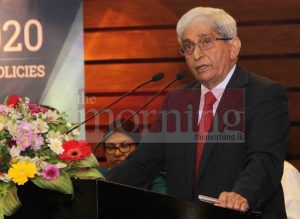 Governor Lakshman was delivering the Central Bank roadmap for 2020, today(6).

The Governor  added that the recent tax reform initiatives constitute a much needed transformation of the country’s tax system toward greater simplicity.

He further noted that the tax relief measures are expected to stimulate the economy while actively contributing to improve business confidence.

Concerns were raised as to how the government would offset the revenue shortfall following the massive tax cuts in line with President Gotabaya Rajapaksa’s election promises in November last year.

Rajapaksa’s policy statement delivered last week did not entail a comprehensive machanism to offset the expected revenue short fall from the tax cuts.

Our objective is to bring prosperity to all Sri Lankans irrespective of racial or religious differences: President

January 14, 2021 byLahiru Pothmulla No Comments
President Gotabaya Rajapaksa in his Thai Pongal message said the sole objective of the Government is to bring prosperity to all Sri Lankans irrespective of racial or religious differences.