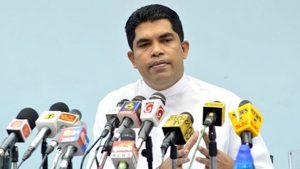 UPFA national list MP Shantha Bandara who amassed the second-highest number of votes in the Kurunegala, second to late Dissanayake, decided to resign from his position to fill the vacant seat.

However, The District Returning Officer of Kurunegala had appointed H. M. D. B. Herath to fill Dissanayake’s post. The gazette notification on the relevant notification was issued on the 09th of September.

Shantha Bandara later stated that he hoped to discuss and take further action over not appointing him to the vacant UPFA Kurunegala District MP seat.

The President decided to award Shantha Bandara the national list position left vacant after M.L.A.M. Hizbullah who was initially selected through the national list, was named the Governor of the Northern Province.

October 7, 2021 byAazam Ameen No Comments
The Joint Health Workers Union (JHWU) released a statement to the media today (07) and held a protest, requesting for proper protocols to be followed when allocating medical staff from outstation to C

SLFP has been ruined: Fowzie

September 5, 2019 byTSM Web Desk No Comments
Parliamentarian A.H.M. Fowzie today said that disciplinary action must not be taken against him, but against the party members who ruined the Sri Lanka Freedom Party (SLFP).