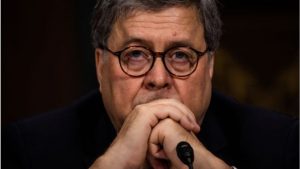 US Attorney General William Barr should be held in contempt of Congress, the House of Representatives judiciary committee has ruled.

Democrats on the committee took the rare step as tensions increased over the special counsel’s findings on Russian interference.

President Donald Trump hit back by asserting executive privilege over the report, shielding it from public view.

The White House and Congress accused each other of abusing power.

Special Counsel Robert Mueller’s report did not conclude that there was a criminal conspiracy between Moscow and the Trump campaign to influence the 2016 US presidential election.

However, Mueller did detail 10 instances where Mr Trump possibly attempted to impede the investigation.

Meanwhile the Senate Intelligence Committee has subpoenaed Donald Trump Jr, one of President Trump’s sons, to legally force him to testify.

He will be expected to answer questions about testimony he gave to the Senate Judiciary Committee in September 2017, which was later contradicted by the president’s former lawyer Michael Cohen, sources from Congress tell Reuters news agency.

Trump Jr will also probably be quizzed on his connections in Russia.

It is the first known legal summons issued to a member of the president’s family in connection with the investigation. (BBC)

US forces destroy own airfield in Syria

October 21, 2019 byTSM Web Desk No Comments
Retreating US troops have bombed their base and landing strip near the town of Tell Tamer in northern Syria, and destroyed equipment at another one.