US may pursue legal action against bombers 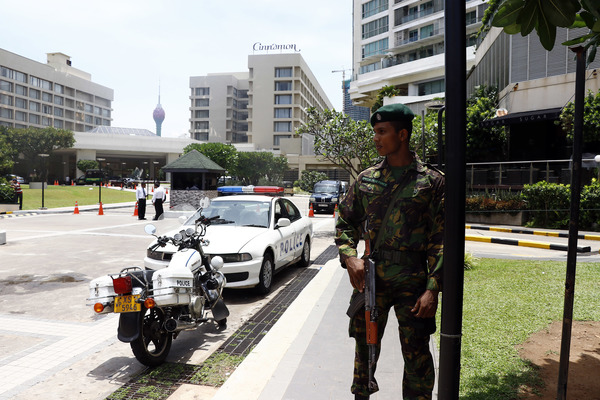 The US maintains the option to pursue legal action against the group linked to the Easter Sunday bombers once the investigations are completed, The Sunday Morning learnt.

US government sources revealed that since there were US citizens among those killed in the 21 April attacks, the US may pursue indictments against those involved, in a US court.

At least 45 tourists were killed in the attacks which hit three Colombo hotels and three churches as well as a small lodge in Dehiwala.

Among the US citizens killed was a US official, Chelsea Decaminada, who was having breakfast at the Cinnamon Grand hotel in Colombo that fateful day.

Following the attacks, Sri Lanka requested the US to deploy the FBI to Colombo to assist with the investigations.

The Sunday Morning learnt that a few FBI investigators are still in Sri Lanka and involved in the ongoing probe.

Since there were US citizens among those killed, there remains the option for the US to pursue criminal charges against the suspects, in the US. Other countries may also seek to do the same as there were those of several nationalities killed in the attacks, The Sunday Morning learnt.

The UK, Australia, India, the US, and other nations which lost citizens in the attack could seek to exercise criminal jurisdiction over those who were involved in or supported the attacks, based on their own laws and multilateral treaties to which those nations, as well as Sri Lanka, are parties.

Apart from the US, India, the UK, and Australia were among a number of countries assisting Sri Lanka in the investigations in the immediate aftermath of the attacks by providing investigators.

It has become clear that a local group had been influenced by the teachings of the Islamic State to carry out the attacks.

While investigations continue to clearly identify those directly and indirectly involved in the attacks, and any foreign links, Sri Lanka sought assistance in preparation to prevent any similar attacks in future.

Sri Lanka and the Global Coalition

The Sunday Morning learnt that a top US State Department official, who was in Sri Lanka last week, had noted that Sri Lanka has the option of joining the Global Coalition to Defeat ISIS so it can work with other countries in the global effort to defeat the terror network. 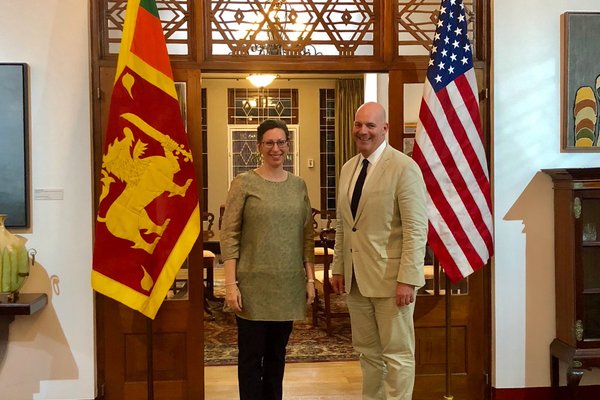 US Assistant Secretary of State for Political-Military Affairs R. Clarke Cooper had made the proposal to the Sri Lankan Government during a brief visit to the country last week.

The Sunday Morning learnt that in his meetings, he noted that Sri Lanka was afforded the options of being either a full member or observer in the Global Coalition.

“The Global Coalition to Defeat ISIS is an organisation of nations that have committed to making a stand against global terrorism. Participant countries can contribute in the coalition according to their own desire and capabilities, as partners or observers, and there are no additional obligations.

“Sri Lanka need not feel isolated in the wake of the 21 April attacks, as there is a network of nations ready to support the country during its recovery,” Cooper told The Sunday Morning when asked about the proposal he made.

The Global Coalition, also known as the Global Coalition against Daesh, was formed in September 2014 and is committed to degrading and ultimately defeating Daesh.
The Coalition’s 80 members are committed to tackling Daesh on all fronts, dismantling its networks, and countering its global ambitions. Beyond the military campaign in Iraq and Syria, the Coalition is committed to tackling Daesh’s financing and economic infrastructure, preventing the flow of foreign terrorist fighters across borders, supporting stabilisation and the restoration of essential public services to areas liberated from Daesh, and countering the group’s propaganda.
The Easter Sunday bombers, while not members of ISIS or IS, had been influenced by IS to carry out the attacks.

While Sri Lankan authorities asserted that they had dismantled the local cell involved in the 21 April attacks, there are still fears that IS propaganda may reach others, and may lead to plans to carry out similar attacks in the future.

Cooper, who while in Sri Lanka had several bilateral meetings, including meetings with State Minister of Defence Ruwan Wijewardene and Secretary to the Ministry of Defence Secretary General S.H.S. Kottegoda, had discussed boosting US’ security partnership with Sri Lanka and promoting prosperity with Sri Lanka for a free and open Indo-Pacific region.

Just last week, a report by the US Department of Defence (DoD) had noted moves by the US to broaden its defence partnership with Sri Lanka.

The report said that within South Asia, the US is working to operationalise its Major Defence Partnership with India, while pursuing emerging partnerships with Sri Lanka, the Maldives, Bangladesh, and Nepal. 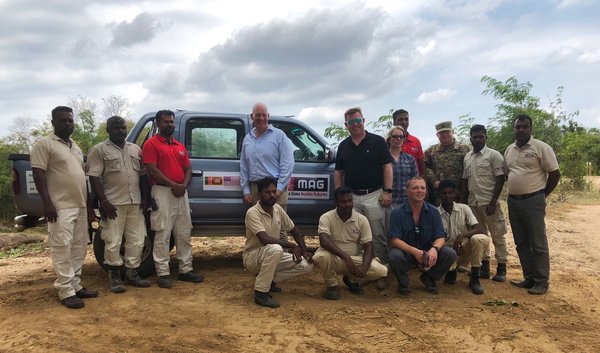 The report stated that while the Indian Ocean region offers unprecedented opportunity, it is also confronting a myriad of security challenges including terrorism, transnational crime, trafficking in persons, and illicit drugs.

To combat these challenges, the US seeks opportunities to broaden and strengthen partnerships with India, Sri Lanka, the Maldives, Bangladesh, and Nepal.

Since 2015, the US DoD had strengthened its relationship with Sri Lanka and increased military engagements significantly, particularly with the Sri Lanka Navy.
“In 2017, we conducted the first port visit in 30 years by a US aircraft carrier – the USS NIMITZ Carrier Strike Group – and the first-ever bilateral Cooperation Afloat Readiness and Training (CARAT) Exercise. In 2019, we increased cooperation on mutual logistics arrangements in support of Indian Ocean security and disaster response,” the Department of Defence’s Indo-Pacific Strategy Report noted.
The DoD noted that Sri Lanka, whose strategic location in the Indian Ocean sees 70% of maritime traffic passing, has outlined a vision to become a regional hub for logistics and commerce.

Supporting this vision, the US Navy recently initiated a series of temporary cargo transfer initiatives enabling non-lethal resupply of passing naval vessels in Sri Lanka. These engagements serve as proof of principle for a range of initiatives that would benefit regional connectivity and security, including support to HA/DR. The DoD also fully supports countries pursuing multilateral agreements and arrangements to enhance regional security, including the 2002 ASEAN-China Declaration of Conduct to lower tensions in the South China Sea.

The report also noted that after 25 years of conflict, the Sri Lankan Government had transitioned to a constitutional, multiparty republic with a freely elected President and Parliament.

The DoD also recalled that the political system in Sri Lanka was challenged with a constitutional dispute in late 2018. Ultimately, however, all parties respected the Supreme Court ruling that returned democratic processes and norms, and the military remained uninvolved throughout the dispute. 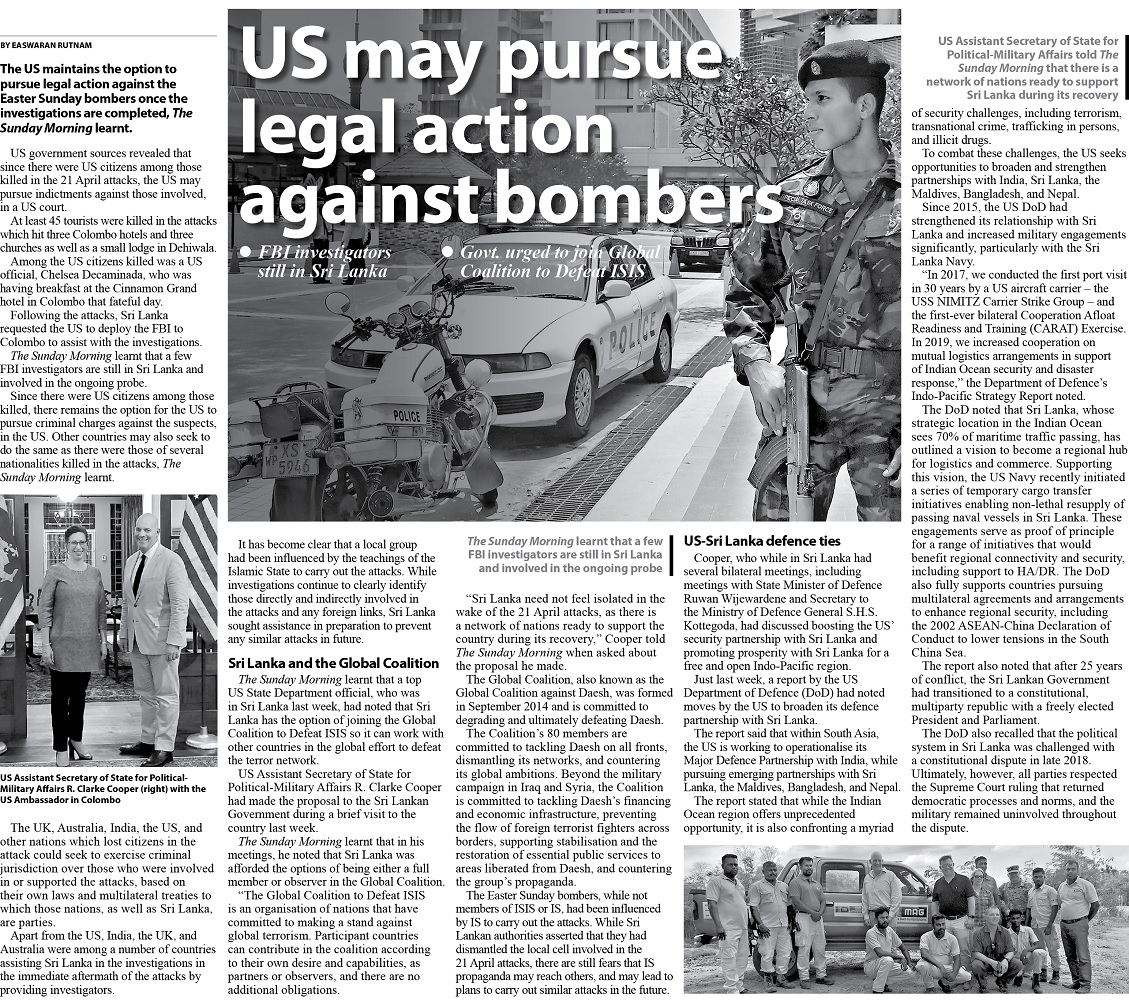 No investor will come to a country with a food emergency: Harsha de Silva

September 14, 2021 byNews Admin No Comments
Owing to neuro developmental disorders such as attention deficit hyperactivity disorder (ADHD) in turn being associated with sexual abuse and related offences in the Sri Lankan context, it is recommen