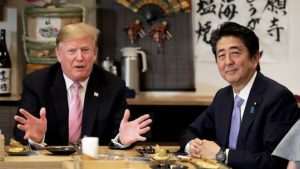 US President Donald Trump has backed a possible face-to-face meeting between the leaders of Japan and North Korea.

Japanese Prime Minister Shinzo Abe said Trump pledged “full support” to the proposed meeting, in which he wants to have “frank” talks about North Korea’s nuclear policy and Japanese abductees.

The US president said he expected “good things” to come from North Korea.

Trump, who is on a four-day visit to Japan, earlier became the first foreign leader to meet Emperor Naruhito.

In their meeting on Monday at the Akasaka Palace – a state guest house – Trump and Abe discussed issues ranging from trade to foreign relations.

The Japanese prime minister said the two leaders were on the same page with ambitions to see North Korea denuclearised, but they appeared to disagree over the short-range missile tests conducted earlier this month.

Abe, who sees the missile tests in nearby North Korea as posing a threat to security in Japan, described them as being “of great regret”, while Trump said he was not “personally bothered”.

The US president also described North Korean leader Kim Jong-un as a “very smart guy” and said he expected “a lot of good things” to come out of North Korea.

As well as backing talks between Abe and Kim, the US president said he would work with Tokyo to bring home Japanese citizens kidnapped by North Korean agents decades ago.

North Korea has admitted kidnapping 13 Japanese citizens in the 1970s and 80s, and returned five to Japan in 2002. It maintains the rest are dead – something Japan does not believe.

The Japanese citizens were abducted to train North Korean spies in the Japanese language and customs.

The decades-old issue is a painful chapter in relations between Pyongyang and Tokyo.

Abe said the abduction issue remained the “most important thing” for his government, adding that families of the abductees were “appreciative” that Trump had met with them on Monday.

“Irrespective of my term in office I have to do everything I can for the resolution of this issue,” he said.

December 5, 2020 byLahiru Pothmulla No Comments
Russia is starting its Covid-19 vaccination programme, with clinics in the capital Moscow inoculating those most at risk from the virus, BBC reported today.