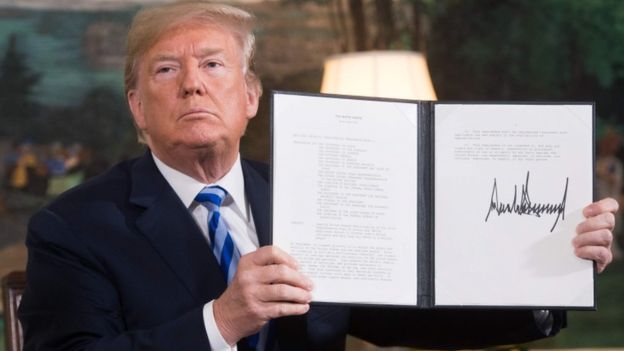 Secretary of State Mike Pompeo has warned that the US will exert “relentless” pressure on Iran unless it changes its “revolutionary course”.

His comments came hours after the Trump administration restored all sanctions lifted under the 2015 nuclear deal, targeting core parts of Iran’s economy.

“We will proudly break the sanctions,” he told economic officials.

Pompeo told reporters: “The Iranian regime has a choice: it can either do a 180-degree turn from its outlaw course of action and act like a normal country, or it can see its economy crumble.”

He said more than 20 nations had already cut their oil intake from the Islamic Republic, and its exports had fallen by a million barrels a day.

European countries which are still party to the 2015 accord have said they will help businesses bypass the sanctions. But there are doubts about how successful this will be.

How did we get here?

US President Donald Trump withdrew the US from the nuclear accord earlier this year, calling it the “worst deal ever negotiated”.

The agreement offered Iran sanctions relief in exchange for reducing its nuclear development. The global nuclear watchdog, the IAEA, says Iran has complied with it.

President Trump has said he wants to get Iran back to the negotiating table.

His administration also wants to stop what it calls Tehran’s “malign” activities – including cyber attacks, ballistic missile tests, and support for terror groups and militias in the Middle East.

The president believes his “maximum pressure” strategy is working, but said on Monday that he wants to impose sanctions gradually to prevent a spike in energy prices.

“I could get the Iran oil down to zero immediately,” he told journalists, “but it would cause a shock to the market. I don’t want to lift oil prices.”

The US state department said that three civil nuclear projects set up in Iran through the 2015 deal would be allowed to continue, “under the strictest scrutiny”.

It said “temporary” waivers had been granted, without giving a timeframe.

Why does the US claim Iran is the ‘world’s largest state sponsor of terrorism’?

The US and Iran have been arch-foes since the Islamic revolution in 1979.

Since then, Iran has provided arms and financial support to militant groups active in the Middle East and further afield.

Some of these groups, such as Lebanon’s Hezbollah, have carried out devastating attacks, including on a military barracks in Beirut in 1983, which killed 241 US service personnel and 58 French paratroopers. Iran denied being behind that attack.

The US has also accused Iran of direct involvement in plotting or carrying out attacks – from bombings to assassinations.

According to a report by the US State Department, since 2012, Iran has spent $ 16 bn on proxy groups in the region as well as support for Syrian President Bashar al-Assad.

Iran accepts neither the US allegations, nor its designation as an exporter of terror.

What could the sanctions’ impact be?

The US reinstated a raft of sanctions in August, but analysts say this latest round is by far the most significant.

More than 700 individuals, entities, vessels and aircraft are now on the sanctions list, including major banks, oil exporters and shipping companies.

The Brussels-based Swift network for making international payments has confirmed it will cut off links with some Iranian banks, isolating Iran from the international financial system.

This is significant as China and India are among Iran’s largest trading partners.

Even before the US sanctions were reimposed, Iran’s economy had had a difficult year, with its currency, the rial, plummeting against the dollar, driving up the price of basic goods.

Hardliners smell blood but Rouhani is safe for now

The sweeping US sanctions will be debilitating to the government’s day-to-day running of the country.

They will also be disastrous for ordinary people who are already reeling under the weight of rising prices, shortages, and the rapidly falling value of the rial.

All this will put President Rouhani under considerable strain.

But the country’s Supreme Leader, Ayatollah Ali Khamenei, is not so sure. Taking on the running of the country under these conditions could be a poisoned chalice for him and for the hardliners he supports.

How do other countries see the sanctions?

The UK, Germany and France – which are among the five countries still committed to the nuclear pact – have all promised to support European firms that do “legitimate business” with Iran.

They have set up an alternative payment mechanism – or Special Purpose Vehicle (SPV) – that will help companies trade without facing US penalties.

However, analysts doubt this will lessen the impact of sanctions on Iran, given the importance of the US to global trade.

Pompeo said more than 100 international companies had withdrawn from Iran because of the looming sanctions.

And even if firms can use the SPV, any US company it does business with could face punishment.

Another signatory to the nuclear deal, China, has said it regrets the re-imposition of sanctions and that its lawful trade with Iran should be respected.

June 30, 2020 byTSM Web Desk No Comments
A new strain of flu that has the potential to become a pandemic has been identified in China by scientists.