Using technology to save the world

September 21, 2021 by Venessa Anthony No Comments

Sanjiv Fernando, a Sri Lankan wildlife conservationist, currently living and working in Washington DC, grew up in Sri Lanka and was passionate about wildlife from a young age. He moved to the US to attend university, where he received a BA in Environmental Science and a MS in Environmental Science and Policy, both from Clark University. During his studies, he conducted research on human-leopard conflict in the Yala National Park buffer zone. 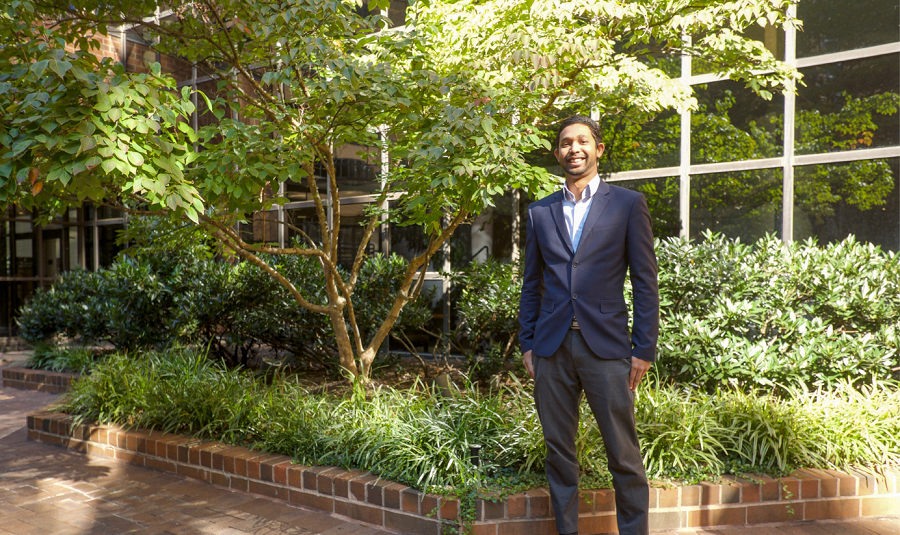 Fernando had always been interested in large mammals, and wanted to study ecology, but after realising the severity of human-leopard conflict and human-elephant conflict in Sri Lanka, he knew that we needed to find solutions for humans and wildlife to co-exist, or else we would not have many animals left to study. After graduating with his Masters degree in 2016, he joined Resolve, a small non-profit organisation in Washington DC.

Brunch spoke to him to learn more about his research and how Sri Lanka can develop from it.

What are some of the leading causes in biodiversity loss currently?

The leading causes of biodiversity loss today are poaching, habitat loss, and human-wildlife conflict. These threats are putting iconic mammals at risk of extinction within our lifetimes.

Human-wildlife conflict is a major driver of population declines for large carnivores, and human-elephant conflict is the leading cause of Asian elephant population declines, and Sri Lanka has perhaps the most severe human-elephant conflict in the world. Retaliatory killings and persecution for livestock losses are leading causes of death for all the big cats – lions, tigers, snow leopards, leopards, jaguars.

These threats are interlinked. Wildlife habitat is constantly decreasing as human settlements and farmland expand into areas historically occupied by wildlife. For elephants, this means less availability of natural food sources and results in crop-raiding, which in turn leads to retaliation. Industrial-scale bushmeat poaching is decimating ungulate populations in Africa and Asia, reducing the availability of natural prey for large carnivores. This causes predators to sometimes feed on domestic livestock, leading to retaliation and persecution from local communities.

Although we have created protected areas for wildlife, poaching, deforestation, and human-wildlife conflict continue to be major threats. In most parks, ranger forces and resources are insufficient to adequately patrol vast, remote areas and avert these threats. Despite all the advances in technology that we enjoy in our daily lives, until now, there were no affordable technological solutions available to prevent environmental crimes before they occur.

Our team at Resolve has developed TrailGuard AI, an AI-powered, camera-based alert system to stop poachers before they kill. You can think of the technology as a security camera system or a “burglar alarm” for national parks. TrailGuard AI features a tiny, cryptic camera that is placed on trails used by poachers. It captures an image anytime something moves in front of the camera and uses Artificial Intelligence on the camera to determine if there is a human in the image. If a human is detected, it immediately sends that image as a text message or email alert to park rangers and designated recipients – over GSM, long-range radio, or satellite networks.

We have also created two variants – ForestGuard AI and WildEyes AI – to prevent illegal logging and human-wildlife conflict. These use the exact same hardware as TrailGuard AI, but run software to detect logging trucks and target wildlife species (elephants, lions, etc.) instead of humans.

How did you manufacture this technology and what inspired it?

TrailGuard AI was invented by my colleague, Steve Gulick. Over a decade ago, he was studying elephants in Central Africa, when he realised that elephants were being poached at an alarming rate. He noticed that in these dense tropical forests, the poachers were taking the same trails used by elephants to hunt and kill them. He realised that if only we could have a hidden camera on these trails to notify rangers when a poacher is passing by, then we could stop the poachers before they kill. So that’s how the idea for TrailGuard was first conceived.

In 2015, Resolve joined forces with Steve and began to really accelerate the development of TrailGuard. We had a successful pilot deployment in an African reserve in 2017 where the technology enabled the arrest of numerous poachers. However, this first version of TrailGuard lacked sophisticated AI and battery life was limited. Following this initial success, we collaborated with Intel to create TrailGuard AI, a game-changing camera-based alert system for wildlife conservation. The system runs AI algorithms on Intel’s computer vision chip, and sends instant alerts to park headquarters to mobilize rapid responses to apprehend intruders before they commit crimes. 70-95% of images captured by camera traps are usually of no-interest, either moving vegetation, changes in light, or non-target species. Running the AI on the camera enables us to prevent transmitting the “noise” and only transmit images of interest, thereby saving greatly on battery life (the camera system can last over three years), data transmission costs, and preventing recipients from being inundated with false positives. Our partnerships with Cvedia and Inmarsat are crucial; Cvedia develops our AI models to detect humans, logging trucks and wildlife species and Inmarsat makes it possible and affordable to transmit near-real time alerts in remote areas lacking cell connectivity.

Throughout your career in protecting endangered species and developing new technologies, what were some of the biggest challenges you faced?

Before joining Resolve, I did not have much of a tech background except for using camera traps. But I knew very little about engineering, telecommunications, electronic components, and building a camera-based alert system. So there was a steep learning curve to understand the ins and outs of developing conservation technology so I could keep up with our engineers and our tech partners.

Developing new technologies is never easy, especially when you are designing systems that are meant to be deployed in remote places with harsh environmental conditions. Think of the technologies you use in your daily life – like your cellphone or laptop – you have connectivity via WiFi or GSM, you can charge it every day, and you don’t have to leave them out for extended periods of time in bad weather. So, developing a technology that can provide connectivity in remote parks where there is no cell service, that can withstand scorching heat and monsoons, and last for years on a single charge was a major challenge.

What has your experience implementing this technology taught you so far?

We have realised that in order for technology to work and scale for conservation, it needs to be affordable, long-lasting, durable in harsh environmental conditions, and be able to have connectivity even in the most remote environments. We have been able to solve these five key challenges. A lot of our success is due to key partnerships with leading technology companies. We are a small NGO but through creative partnerships with Intel, Cvedia, and Inmarsat, we’ve been able to create a groundbreaking new technology for conservation. That’s an area where Resolve really excels, building innovative partnerships where they are least likely but most needed.

In terms of implementation, having great field partners is critical when you are testing new technologies. When you are piloting a new technology, especially in difficult environments, things are bound to not work perfectly on the first try. We’ve been lucky to have really great partners in the field, but also strategic in intentionally selecting field partners who are understanding and collaborative for pilot deployments. Having partners who understand that issues will crop up with the technology and are committed to work through them with you is so important in initial phases, and helps refine the development of the technology before we scale.

What are your current plans for the future?

TrailGuard AI is currently operating in seven protected areas in Africa. Our plan is to scale our technologies – TrailGuard AI, ForestGuard AI, and WildEyes AI to 100 protected areas around the world in the next 18 months. We have had tremendous demand from over 100 conservation groups across six continents who want to use our technology to help protect wildlife and their habitats. To meet this demand, we have begun manufacturing at scale – which is a science in itself – and hope to have hundreds. We’re also looking for corporate sponsors to help support our “100 Parks Campaign”. Many protected areas that desperately need this technology do not have the funds or resources, so we are also looking for donors and corporates to “sponsor a park” for our “100 Parks Campaign”.

Beyond the 100 Parks Campaign, we continue to innovate and we’re already developing variants of the technology to address other priority conservation applications – including preventing fisheries bycatch (FisheriesGuard AI) detecting invasive species on islands (IslandGuard AI), and protecting Indigenous lands from invasion (RiverGuard AI). These devices will all use the same hardware as our current camera-based alert system, but just run different AI software specific to each use case.

March 22, 2021 byNews Admin No Comments
There’s nothing more essential to life on Earth than water. With global warming becoming a huge threat and the Earth slowly dying, the question of accessible water makes itself known.