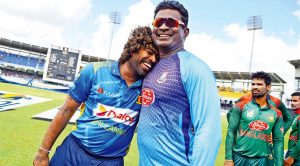 Bangladesh Cricket Board (BCB) sources said last week that Vaas’ monthly salary is initially considered to be $ 7,000 which is equivalent to Rs. 1,400,000.

Whether the appointment of Lasith Malinga for the Australia Twenty20 International (T20I) series as a consultant coach of the Sri Lanka national team’s fast bowlers hastened Vaas’ decision to quit was not known until yesterday (20).

Anyway, Vaas’ negotiations with the BCB had already begun much before Sri Lanka toured Australia this month.

“I am trying to bring Champaka for the shadow team. It would be better if I could use him in the national team as well. We don’t really want to be in a hurry. Haste is never good,” BCB Director and Game Development Committee Chairman Khaled M. Sujon is quoted to have told bdcrictime last week.

Sri Lanka’s Rangana Herath is already working as their Spin Bowling Coach and time and again, Sri Lankans have worked in the Bangladeshi national setup.

“Chaminda Vaas’ name has come up. He was undoubtedly a much bigger player (than Ramanayake). How big he is as a coach is not yet proven, although he is coaching. Speaking of which, we don’t want to rush,” Sujon had also added.

Bangladesh are to begin a short-format home series against Afghanistan on Wednesday (23). The series will include three One-Day Internationals (ODI) and two T20Is which will go on till 5 March in Chattogram and Mirpur, Bangladesh.

One down and one to go, says MJ

May 10, 2022 byNews Admin No Comments
In one of the darkest hours in Sri Lankan history, when political goons attacked peaceful and young protesters in Colombo on Monday (9), the country turned back to violence, in a manner similar to wha