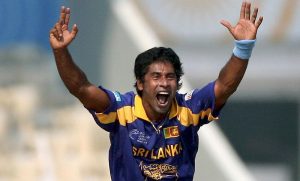 Sri Lanka bowling coach for the West Indies series Chaminda Vaas has resigned from his post in the eleventh hour of their departure to West Indies yesterday (22).

The Morning Sports learnt anyway that Vaaa has requested an increase in his per diem for the tour from $ 150 to $ 300. But both Cricket Committee, headed by Aravinda de Silva, and SLC have initially not given any clear answer, even hours before the limited-over squad’s departure to the West Indies, last afternoon.

De Silva has asked Vaas to meet SLC to solve the issue but SLC has asked him then to sort it out with the Cricket Committee.

Later SLC has agreed to give an increment to his monthly salary from Rs. 550,000 to 750,000 but had not paid heed to his request for an increase of his on-tour per diem.

Interestingly Vaas has been accompanied to meet SLC President Shammi Silva last afternoon but allegedly Silva has not received Vaas in his room to the anguish of the former player.

Angered for being cold shouldered, Vaas has tendered his resignation from both his temporarily West Indies assignment as well as his permanent job in the High Performance Centre.

Vaas was appointed to the West Indies series only as the national team bowling coach after former coach David Sekar resigned suddenly from his post last week (19). But it was reported that Sekar had left his job some weeks before as he has received a new contract in an English county. 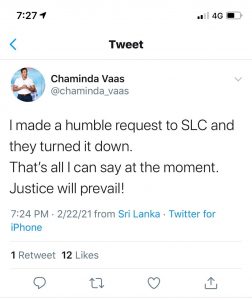 This situation will only jeopardise Sri Lanka’s performance in the West Indies in a challenging and long tour.

At the same time it is recalled that Vaas was involved in a similar pay dispute in the Lanka Premier League (LPL) last year which ended up in him resigning as a coach of one of the franchises.

It is saddening that a legend and one of the greatest servants of Sri Lanka’s cricket has been entangled in this type of dispute over and over. One of the chief orchestrators of many an remarkable win in Sri Lanka cricket history, Vaas took 355 Test and 400 ODI wickets while scoring over 3,000 and 2,000 Test and ODI runs respectively.

The situation also indicates the decision-making confusion with regard to Sri Lanka’s cricket at the moment as both Cricket Committee and SLC have no clarity apparently on the responsibilities on major areas.

Perhaps SLC may be offering bigger amounts to overseas coaches and apply a strict stance for the local however important such ones may be.

Sri Lanka Cricket (SLC) wishes to inform that former Sri Lanka cricketer and Consultant Bowling Coach of Sri Lanka Cricket, Chaminda Vaas today (22nd February) announced his resignation from his post effective 26th March 2021, and also informed that he will not be available to tour West Indies as a member of the support staff.

Vaas’s resignation comes hours before the team was scheduled to depart for West Indies, which is scheduled for tonight (yesterday night).

It is particularly disheartening to note that in an economic climate such as the one facing the entire globe right now, Mr. Vass has made this sudden and irresponsible move on the eve of the team’s departure, based on personal monetary gain.

The Management of SLC, and indeed the entire nation, hold Mr. Vaas in high esteem as a cricketer who has excelled for his country. His years of yeoman service have been appreciated and rewarded over the years both in status and in kind.

In such circumstances, it is extremely disheartening that a legend such as Chaminda Vaas has resorted to holding the administration, the cricketers, and indeed the game at ransom, by handing in his resignation at the eleventh hour, citing the administration’s refusal to accede to an unjustifiable demand for an increased USD remuneration, in spite of being a contracted employee of Sri Lanka Cricket, already receiving remuneration that is in keeping with his experience, qualifications, and expertise, in addition to which he would have been entitled to the usual USD per diems offered to all members of a travelling squad.

March 6, 2020 byRevatha No Comments
Australia will face India in the ICC Women’s T20 World Cup 2020 Final this Sunday after they came through a nerve-shredding semi-final against SA in Sydney.