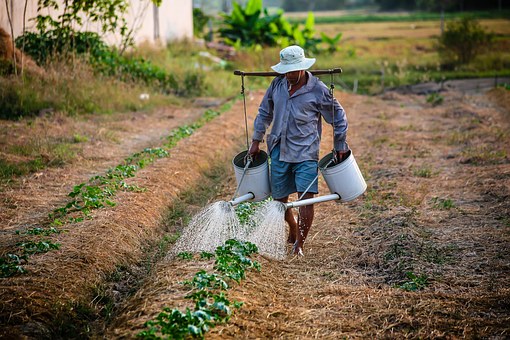 Although many government officials claim that the country’s agriculture sector has so far been relatively less affected in the wake of the third wave of the Covid-19 pandemic, farmers and a key farmer association in the country are forecasting a significant drop in vegetable crops in the upcoming months.

The farmers have been affected in many ways by the islandwide travel restrictions, which will be effective till 14 June, and the adverse impact on crops due to the unavailability of organic fertiliser coupled with the increased prices of vegetable seeds in the market.

Speaking with The Sunday Morning, All-Ceylon Farmers’ Federation (ACFF) National Organiser Namal Karunaratne said the vegetable farmers in several districts have already been badly affected due to the unavailability of organic fertiliser and the relevant vegetable seeds.

He said: “In addition to the current fertiliser problem, we observed that the purchase of vegetable seeds by farmers has decreased due to the higher price levels. Even if they purchased seeds, the relevant organic fertiliser is not available. Due to this reason, there is a considerable drop in cultivation and in the upcoming months, the consumers may have to spend approximately Rs. 500 to buy a kilogramme of vegetables.”

While adding that the Government does not have a proper plan to promote organic farming, Karunaratne said the local farmers are facing a serious problem and some farmers have already abandoned their work.

Pointing out that the farming community is in a dire situation with the pandemic on one side and the fertiliser issue on the other side, Karunaratne said: “There are no seasons for vegetable farming. The farmers have to harvest on the relevant days and sell it within a limited time. The vegetables can be harvested for a maximum of 30-35 days; after that, the farmers have to grow them again.”

He said although the Government stated that the farmers could directly send vegetables to the dedicated economic centres, there are certain failures when handling it practically.

“The farmers have to obtain a separate licence from the relevant divisional secretariats and most of the farmers are not literate enough to handle this situation. So, intermediaries are taking advantage of the situation and obtaining the licence. They are benefitting from the efforts made by the farmers and they keep higher profits. The farmers become helpless due to this growing monopoly.”

Meanwhile, a farmer named Gune from Kekirawa pointed out that the individual traders in the economic centres are selling vegetables at a much higher cost in the market.

Gune shared: “The intermediaries, wholesalers, and retailers in the economic centres are buying vegetables from us at a much lower cost and selling them at a higher price in the market. So, there is a rise in vegetable prices in the market but it is profit that will not be received by the farming community.”

Mentioning their difficulties in handling the upcoming cultivations, he said that the travel restrictions imposed due to the pandemic is one issue and on the other hand, there is a shortage of organic fertiliser and relevant hybrid vegetable seeds in the market.

Indicating that the Government has not managed the situation properly, Gune said: “We are still suffering from the loss incurred during last year’s lockdown and within the upcoming months, there will be another food shortage due to the fertiliser and seeds issue in the country.”

He also stated that the Consumer Affairs Authority (CAA) had newly imposed control prices for both wholesale and retail vegetable traders which is unbalanced pricing from the farming community’s perspective.

However, speaking with The Sunday Morning, CAA Director Asela Bandara said the authority had made a control price list with the consent of the traders at the New Manning Market while CAA officials have warned vendors who sell vegetables at a higher price in the market.

“We are also taking legal action against the vendors who are not displaying the price board and who are selling vegetables at higher prices.”

According to Narahenpita Economic Centre Manager Prashan Rajapaksha, there is no unusual increase in the vegetable prices in the market. “Normally, when transporting vegetables to Colombo, there is a small increase on the price but it is not an unusual increase,” he said.

According to the report released by the Central Bank of Sri Lanka (CBSL) on 31 May, the prices of most vegetables decreased further compared to the prices on 25 May, due to favourable supply from the districts

Conservation and sustainable use of wetland ecosystems in SL

May 23, 2021 byNews Admin No Comments
Wetland ecosystems play a critical role in our natural environment. Since the early historic settlements, Sri Lankan civilisations are intertwined with wetland ecosystems. The services rendered by the

April 25, 2021 byNews Admin No Comments
In a recent report published by the National Council for Road Safety (NCRS), the main reasons behind road accidents have been attributed to driving under the influence of alcohol and driving above the