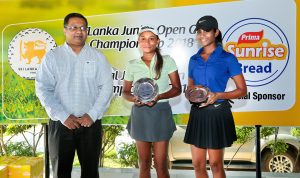 “It is great to see so many talented young golfers coming through the Junior Open Golf Championship and the high standard of Golf showcased especially by the two Champions Vinod and Taniya Minel,” said Tan Beng Chuan, chief guest and the General Manager of the Prima Group, the sponsor of the event for the 11th consecutive year, since 2008.

Vinod captured the Junior Boys Championship for the 3rd consecutive year and will be eligible to defend his title once again next year. Vinod carded a 72 (one over par) final round, his best score in the 2018 championship, to seal a comfortable victory by 18 strokes from runner-up, Haroon Aslam of the Victoria Golf & Country Resort. Haroon ensured his runner-up position nine strokes clear of Dhuwarshan, the representative from the Nuwara Eliya Golf Club, who was the winner of the 2017 Junior Open Silver Division.

Taniya Minel Balasuriya continued her consistent form carding a 72 (one over par) in the final round to become the Sri Lanka Junior Open Girls champion for the second consecutive year, followed by an outstanding 17 strokes from Kayla Perera who returned a two under par second round score, which was the best score returned in the 2018 Championship.

The ever improving Nirekh Tejwani won the Silver division in the Boys category by a clear 11 strokes, despite his regular rival in the same division Yannik Kumara leading the field from start to finish, but Nirekh sealed the victory with an excellent three over par 74 in the final round, having held a slender two stroke advantage going in to the final day. Danushan was also not too far behind in 3rd place, as he was just two strokes behind the runner-up and three strokes ahead of Levon Niyarepola who secured 4th place.

Shanal Binushka ensured victory in the Bronze Division with a final round of 67, to hold on to a three stroke win from Reshan Algama, who came in second place. The top two in the Bronze division drew clear of the rest of the field with Kvahn Tejwani and Kaya Daluwatte securing 3rd and 4th place respectively, 15 and 16 strokes adrift of the runner-up. The Bronze Division played over 14 holes and three rounds comprised of promising future talent from youngsters, who are well accomplished for their age category of 10 – 11+ years. 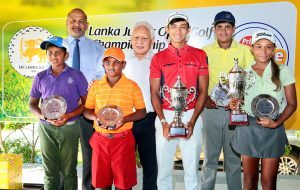