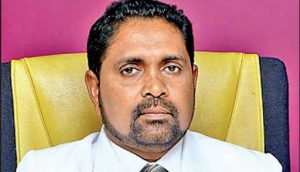 Susantha Mendis of the SLSRFA

The all-important tournament format of the next all-island schools rugby season is likely to be finalised when the Sri Lanka Schools Rugby Football Association (SLSRFA) Tournament Committee is to meet today (8).

“The school rugby players have slowly begun to do their physical training now. Yet due to the pandemic we have not been allowed by either the education or health authorities to start our regular practices and competitions. The delay is because ours is a contact sport. Yet we hope we can start our first tournament in three months,” said Susantha Mendis, Vice President of the SLSRFA to the Morning Sports yesterday (7).

“The current plan is to join the two regular A and B groups, and to have 24 teams and later reduce them up to six, so that one school can play a minimum of five matches,” he explained.

“We have also decided to request for the approval of physical training first. We plan to start everything in about three months from now if the pandemic situation of the country is to improve. We will have a discussion with the Education Minister as well. Anyway, there won’t be a tournament before at least three months from now,” Mendis confirmed.

December 10, 2020 byRevatha No Comments
Final decision to be taken today

Military to be immune from international prosecution