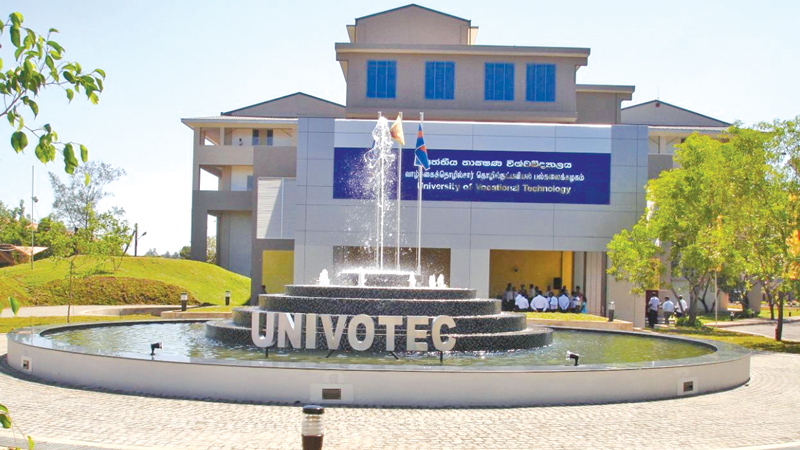 February 1, 2021 by Ruwan Laknath No Comments

Certain subskills need to be incorporated into the English module being currently taught at the University of Vocational Technology (Univotec) for students who intend to work in the mechatronics industry, said a study which explored the actual English requirements of the industry and the type of English that is currently taught to students. According to the Mechanical Engineering Department of the University of Moratuwa, it integrates mechanical engineering, electronics, computer, and control systems engineering, towards creating intelligent, cost-effective, future cutting-edge systems.

This was noted in a research article titled “A Needs Analysis on the language skills required by the industry from vocational graduates” authored by D.L. Ranasuriya (attached to the Language Studies Department of the Education Faculty of the Univotec) and S.M. Herath (attached to the Postgraduate Institute of English of the Open University) and published recently in the Sri Lanka Journal of Social Science.

These subskills include the ability to read and comprehend manuals, lab reports, electronic mails and memos, comprehending and filling out request forms, quotations and purchase orders, and writing out lab reports and other related reports.

It was also observed that what was currently being taught was English for General Purposes (EGP), whereas aligning with the perceptions of the industry, it was stressed that some English for Specific Purposes (ESP) was also essential.

Furthermore, the study highlighted that the perceptions of industry personnel revealed that all four language skills (speaking, reading, writing, listening) played a significant role in an employee’s profile, to varied degrees or extents.

The study revealed that industry personnel strongly believe that English currently plays a significant role in the industry in order to handle its communicative needs, and this requirement is not fulfilled by most graduates seeking employment.

Hence, the primary suggestion of the industry personnel was that the English module course content taught at the Univotec incorporates some elements of ESP. However, certain industry personnel suggested that since the speaker’s first language is mainly Sinhala and sometimes Tamil, and because students often struggle with the basics of English, it would be better if a blend of both EGP and ESP is incorporated into the course content.

Although currently, during the students’ first year in their respective courses, they are offered an English component as part of their studies, employers seem to be dissatisfied with their English language skills as observed from surveys and the direct feedback provided on the students’ performance.

In order to carry out this study, the sample was drawn from the Univotec, the only university that awards degrees to the vocational sector in Sri Lanka, to entrants through the National Vocational Qualifications ladder, in other words, those who have exited the traditional education system.

The Bachelor of Technology in Mechatronics has a high demand in the vocational sector and in other Sri Lankan contexts as well as globally, and attracts a larger number of applicants in comparison to other degrees due to its demand in the job market.

In the current study, the sample consisted of 15 industry personnel from the field of mechatronics-related industries, and they were selected to answer questionnaires, and five out of them were selected for focus group discussions, as they are responsible for the placement of interns in industrial training.

One aspect of the study was the need for English in the industry. Interviewees stated varyingly that “it is a weapon to survive”, and that they are “expected to move with companies including multinationals”, deal with “foreign customers” and that “in an industry where everyone has a role to play and task assigned in order to move towards success, no one would hence spare time to help one understand a catalogue of a product that has newly arrived.”

As per one of the industry personnel, first impressions count.

“We are in a huge competition not only amongst companies but also among individuals. This is seen especially at interviews,” an interviewee noted regarding the hiring process. It was expressed that although many vocational graduates walk in with qualifications, their lack of speaking skills hinder them from exhibiting their talents and potential effectively at the interviews which results in the inability to get hired. “We have thousands of applications that flow in but we give much consideration to English language proficiency,” an industry person noted. It was further explained that at interviews, a candidate is evaluated on whether he/she would be able to market himself/herself.

“If one has the ability to speak fluently, then that individual would be able to help towards the progress of a company.”

Furthermore, it was expressed that within companies, workers are encouraged to communicate among their peers in English. Some respondents did express the need to build an environment where more staff would be able to use at least simple expressions in English.

“For example, if one is engaged in a managerial position, then there is a need to answer phone calls with etiquette and is expected to, in certain situations, make presentations.”

Reading too was stressed as being essential. An individual should be able to handle whatever the task assigned in his/her job, especially documentation.

“Mechatronics is a foreign subject and therefore, the majority of the manuals are in English.”

Good writing skills also emerged as a strong need from the discussions.

“Those with a mechatronics degree employed in managerial positions need to pay more attention to writing skills.”

Thus, it was stated that if an individual is engaged even in any clerical position, he/she should be able to compile reports and type in a manner that is well organised and easily comprehensible.

Listening too was highlighted as important, especially in terms of listening and comprehending during discussions and meetings, and also in comprehending oral instructions and directions.

Although mechatronics is a hands-on subject, knowledge of the four skills of the English language are needed in certain job roles for communication purposes and performance. It was also observed that the majority of graduates lacked these necessary skills. Many are unable to express themselves. The field of mechatronics boasts of many work opportunities, both locally and internationally, and one interviewee stated that if one is not able to work in English, then there cannot be development in the industry.

“No matter how much we invest in the field, if we are not able to market our ideas and products, then there are drawbacks.”

It was revealed that many did not even speak in English and were comfortable only in Sinhala. This affected them when attempting to express their views on certain subjects. Many refrained from speaking due to shyness stemming from their poor command of English. It was also expressed that among peers, English is hardly used.

“There are individuals who are unable to write a sentence in English.”

With regard to supporting communication needs, although Univotec offers an English module, it was observed that industrial needs were not catered to by the content that was being taught. The current English component is more one of general English. Knowing some grammar rules and a smattering of vocabulary would not enable these graduates to achieve the target proficiency and the demands of their workplaces. The interviews revealed that there is a need for individuals to understand and use technical jargon and this was highlighted as an area that could have been improved at the university level. Through an observation of the current English language content that is being offered to students, it was obvious that the curriculum did not include technical terms, and at one point it was revealed by language teachers that even for presentations, students are given general topics and not subject-related ones.

“It would be better if what is being taught concentrates more on speaking skills which would help them to make presentations on subject-related topics and to communicate with their peers.”

It was also suggested that the students’ relative lack of speaking skills may be because they are only learning English as a subject, and that if speaking was practiced in an authentic environment, it would be much more effective.

“They need to feel that they are in an office environment and this will make them speak more comfortably when they actually come to work in the industry.”

It was suggested that it would be better if students are exposed to more terminology related to their respective target subjects. This will be helpful in the industry as they will be able to understand words and phrases in manuals and lab reports. It was emphasised that general English should be taught with a mix of ESP. Some of the participants expressed that it would be better if the students learnt the basics of grammar that would help them form sentences correctly.

“They need to be able to express their ideas and for this, grammar is not important, as long as the message is clear to the audience.”

All five industry personnel interviewed stated that technical English was essential. It was further stated that undergraduates as well as graduates come to work in the industry with a poor command of the vocabulary in the technical field and that they would understand certain terminology only when it was explained in Sinhala. It was pointed out that what is important in the industry is the terminology related to mechatronics and the ability to prepare documents. As per another industry person, one needs good presentation and negotiation skills, and to be able to handle emails. Some of the industry personnel thought general English should be taught and others emphasised ESP. Some participants stated that it would be better if the students are taught more subject-specific English content so that they would be familiar with mechatronic-related terminology, and that they should be taught work-related skills such as how to read a lab report. However, some of the respondents said that while students were taught the basics of English that would include grammar rules, that content should be blended with ESP content. “We need both. Basic English and subject-specific English are needed.”

It was revealed that the current practice of general English needs to, therefore, be revised to suit industry needs. The English course content should hence include a blend of both EGP and ESP. In other words, an individual should be aware of both the common rules of grammar as well as subject-specific terminology and skills.

March 14, 2021 byNews Admin No Comments
Sri Lanka is to continue with the Oxford-AstraZeneca vaccine, despite the use of the vaccination being suspended in some countries following post-vaccination complications.

Next week Parliamentary sittings limited to only two days

October 13, 2021 byRuwani Fonseka No Comments
The Parliamentary sittings for the next week have been limited to Thursday (October 21) and Friday (October 22).

The decision was taken at the meeting of the Committee on Parliamentary Business, chai