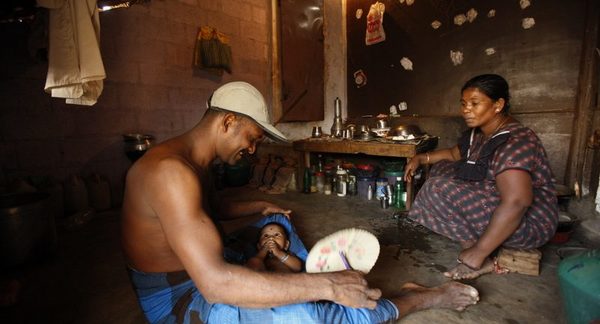 Steps are underway to assist the return of a large number of Tamil refugees living in Tamil Nadu, with their belongings, by ship.

India has offered to organize the ship and details are being worked out, The Sunday Morning learns.

Most of the refugees have expressed willingness to return to Sri Lanka as opposed to live in refugee camps in Tamil Nadu.

Over the past few years a number of refugees had returned voluntarily with the assistance of the UN refugee agency.

The government has also encouraged the refugees to return and is involved in facilitating the process and offering other forms of support.

However, while the government has urged Tamil refugees in Tamil Nadu to return to Sri Lanka, shelter and livelihood issues have affected the returnees.

The Sunday Morning learns that several of those who have returned to the country are living with relatives or friends as their housing issues have not yet been resolved.

Sources said that among the reasons why most of the returnees don’t have homes to go back to is because some houses are in high security zones, some are damaged or destroyed or some never had a house in Sri Lanka.

The Sunday Morning learns that the Colombo office of the United Nations High Commissioner for Refugees, the UN refugee agency has had discussions with the government on the matter.

The Organization for Eelam Refugees Rehabilitation (OfERR), which works with the refugees through its offices in Chennai and Colombo, has also discussed the issues faced by the refugees when they return.

Thousands of Tamils fled Sri Lanka to Tamil Nadu between 1983-1984 and were housed in refugee camps across Tamil Nadu.

Tamil Nadu had offered some of them citizenship but yet most of them continued to live like second class citizens and preferred to return home.

With the end of the war in 2009, the refugees began to return in batches by ferry and by plane with the assistance of the UN refugee agency.

The ferry service however was suspended and the process is now only by plane.

On Tuesday a batch of 83 refugees will be returning to Sri Lanka through the process facilitated by the UNHCR.

Sanjitha Satyamurthy, Assistant Protection Officer, Protection Unit at the Colombo office of the UNHCR told The Sunday Morning that refugees who want to return to Sri Lanka often reach out to the UNHCR office in Chennai.

“Once they approach UNHCR and say they want to voluntarily return to Sri Lanka we help them with the formalities and also purchase the ticket. Once that is done the UNHCR office in Sri Lanka is contacted and we coordinate the movement,” she said.

On their return to Sri Lanka the refugees are met at the airport by UNHCR officers as well as officials from the Ministry of National Policies, Economic Affairs, Resettlement and Rehabilitation and Northern Province Development.

UNHCR monitors the arrival of the refugees and the process of security clearance and customs clearance, before they are ready to go home.

The Ministry of National Policies, Economic Affairs, Resettlement and Rehabilitation and Northern Province Development also provides a grant to the returnees.

“Once they return to their places of origin, which is usually the North and East, they go to our field office and register for protection monitoring and get advice on various programs available at the places of origin including social services, etc,” she said.

UNHCR also compiles a comprehensive report every year on the reintegration process by interviewing the returnees.

Satyamurthy said that most of those who return stay with friends or relatives as they have no place to go to.

Housing, shelter and water sanitation are the top three issues faced by the refugees who return, noted in the reintegration analysis of the UNHCR.

Too much paper work

The President of OfERR (Ceylon) Sinnathamby Sooriyakumary said that apart from shelter and housing the children born in refugee camps to Sri Lankan parents face issues in obtaining citizenship and national identity cards in Sri Lanka.

A refugee family after 25 years of life in exile, return to their places of origin with three to four extended families. The land which is owned by the father or mother is not enough to share among all his or her children and their family. Hence a minimum of ¼ acre of land needs to be allotted for newly extended families. Similarly those who did not own land also need to be provided similar type of assistance with land. Some returnees face challenges in getting their land back as while they were away, these lands have been either encroached or taken over or re allocated to others.

In many cases, the returnees who have lands, on return, find them as jungles and they need quite a big sum to clear and fence them and even to put up a temporary shed.

Shelter support is regarded as prime need among other needs for the returning refugees and returned refugees in Sri Lanka. The refugee returnees upon return stay with their relatives or friends until they receive housing assistance or build their own house. However, staying with relatives is normal practice, and it takes a long for them to be able to build their own house. Staying with relatives leads to unnecessary problems, including lack of safety and security, sexual exploitation, abuses, etc.

It is learnt that some of the returnees who returned in 2009 have not yet received any housing assistance. Nevertheless, they manage to build temporary sheds without safety standards. Children, women and elderly persons, who live in these shelters, are prone to health, hygiene and safety risks and threats. One example demonstrates that a family arrived in 2013, at Talaimannar Pier, sheltered under a tree as they did not have relatives to accommodate them

Many refugees lost their documents while fleeing from conflict areas. There have been more than 16,000 children born in India while these refugees were living in India. Sri Lankan Consular services were not available for these refugees until 2002.

OfERR has advocated for a policy for registering these birth and finally from 2002, these services have been extended to refugees and the Deputy High Commission in Chennai had been giving this service to refugee by conducting mobile service at each district Secretariat.

However, due to problems caused by some local political groups, the Tamil Nadu government had suspended granting permission to conduct the mobile service.

Sooriyakumary said that so many documents are sought by the Sri Lankan authorities when the refugee children become adults and apply for the national identity card.

Sooriyakumary said that a Rs. 25,000 penalty is also charged from the returnees for not having the proper documentation to obtain a national identity card.

“That is the system but it must be relaxed for the returnees. These people left the country, not because they wanted to and the children were born in Tamil Nadu. Without a national identity card you can’t work or do anything in this country. We need to make it easier for them to settle down again her,” she said.

She said that most of the refugees want to return to Sri Lanka than remain in refugee camps.

Sooriyakumary herself was a refugee. She fled Sri Lanka and took refuge in Tamil Nadu in 1983 following the communal riots. She continued to voice the concerns of the 1983 riot victims.

In 1984, she became one of the founding members of OfERR in India. S.C.Chandrahasan, son of the iconic Tamil Politician S.J.V Chelvanayakam, is the Founder and Chief Functionary of OfERR.

Sooriyakumary said that the current government has the political will to bring back the refugees from Tamil Nadu.

She said that following talks between Chandrahasan and the Sri Lankan government, some steps have been taken to help the refugees to settle down.

Making politics out of it

However while the government is encouraging the Tamils to return, some Tamil politicians feel the environment is not right for the refugees to come back.

Former Northern Province Chief Minister C.V. Wigneswaran told The Sunday Morning that unless the return of refugees are overlooked by international organisations under the purview of the UN, he doubts the refugees will be keen to come back.

“Those who returned earlier, many of them, went to their former areas and found their lands taken over by Sinhalese under new documents given to them by the government. Some of them are in makeshift huts in Vavuniya still unable to get back to their lands. Some lands have become State lands under the Forest Department or Archaeological Department or Wild Life Department. The fact some of those lands had permits and their permit holders were in India was overlooked or intentionally overlooked. This means they want them to suffer and therefore get back to India or go elsewhere,” Wigneswaran said.

Wigneswaran also said that proper arrangements are not in place for the refugees to return.

“What arrangements have been made for those who return to get back to normalcy? Have lands been found for those having no permits? Have houses been built? What are they to do for their livelihood.?  What about the schooling of their children? They get good education now in India. Merely giving them money on coming back would not solve their problems,” he said.

He said that the strong military presence in the North will also discourage Tamil refugees from returning to Sri Lanka.

Minister of National Integration and Official Languages Mano Ganesan told The Sunday Morning that while he admits there are some shortcomings, no one should discourage the refugees from returning to Sri Lanka.

“The security related reasons for why the refugees fled the country do not prevail anymore. But yes there are issues related to housing and other social issues which need to be addressed,” he said.

He said that the authorities will pay more attention to the social issues to ensure the refugees have a better environment to return to.

March 28, 2021 byNews Admin No Comments
A massive economic loss is predicted for the Sri Lanka Ports Authority (SLPA) in the future, once the operations of the West Container Terminal (WCT) at the Colombo Port commences under the Adani..

June 28, 2020 bySarah Hannan No Comments
A few prominent and well-seasoned former parliamentarians will yet again be contesting this election from the three districts.