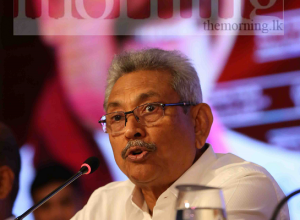 President Gotabaya Rajapaksa has said that the people reported missing during the war are dead.

The President’s Office yesterday (18) quoted Rajapaksa as saying that he had outlined his plans to address the issue of missing persons at a meeting with UN Resident Co-ordinator Hanna Singer.

Rajapaksa had said that the missing persons were actually dead and that most of them had been taken away by the LTTE or forcefully conscripted.

“The families of the missing attest to it. However, they do not know what has become of them and so claim them to be missing,” the President’s Office stated.

The President had said that, after the necessary investigations are completed, steps would be taken to issue death certificates to these missing persons.

He had added that the affected families would be given the support they require to continue with their lives.

June 22, 2022 byNews Admin No Comments
The Colombo Additional Magistrate yesterday (21) ordered the release of youth activist Anuruddha Bandara, who was arrested on suspicion of publishing various posts and articles on social media in a ma

June 27, 2019 byRandev No Comments
Sri Lanka's Ambassador to Geneva, A.L.A Azeez accentuates the need and the importance for the Conference of Disarmament to begin substantiative negotiation appropriate to the disarmament framework.