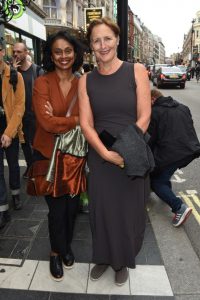 Sonali Deraniyagala, author of WAVE, a memoir detailing the tragic events that unfolded in the 2004 Boxing Day tsunami, it seems, has found love with Fiona Shaw, famous actress from movies like Harry Potter and Killing Eve.

Fiona Shaw speaking to Mailonline has opened up about how she is enjoying her married life with her partner who suffered the loss of both her children, husband as well as her two parents while on a family holiday at the Yala national park, on the south-east coast of Sri Lanka.

The story of the sole survivor of her family is truly a remarkable one and a strong message of hope and empowerment to those going through tough times in their lives.

Fiona Shaw further told MailOnline that “I married and that calms you down. I didn’t really have a domestic life because I was always working. But I do have one now, which I love.”

In her book, Wave, Sonali details how she was found unconscious in a lagoon following the tragedy – only to then learn she was the sole survivor of her family.

The Cambridge graduate was on a Christmas holiday with her husband Stephen Lissenburgh, their sons, five-year-old Vikram, and seven-year-old Nikhil, and her parents Gemini and Edward, when disaster struck.

In her book, Sonali reveals her husband and sons made it to a jeep and attempted to escape the disaster when they saw a 30ft wave of water coming towards them – and sadly they did not have time to collect her parents.

After learning her family were dead, the Sonali fell into depression. After relocating to New York, a therapist suggested she make notes of her thoughts – which became the framework of her award-winning memoir.

The book moved Fiona, who read it while performing on Broadway, and sought out the author – with the pair building a relationship after meeting.

Fiona has described her passion for the book, describing the book to the MailOnline as an: “Astonishing memoir of the tsunami in 2004 when Sonali lost her husband, parents and children.

“She held on to a branch and lived. Thereafter it’s an amazing description of their happy life in London and Sri Lanka before they died. I was blown away by it.”

October 7, 2021 byNews Admin No Comments
With us (hopefully) on the tail-end of the pandemic, it’s time for us to get back to the best of island-living, and a new Austrian brand with a Sri Lankan influence hopes to remind people of the best

September 26, 2018 byJennifer Anandanayagam No Comments
In view of the 208th Mexican National Day The Kingsbury will be featuring a Mexican themed Ala carte menu from 21 - 27 September at The Grill, carefully curated by Chef Alondra Maldonando, who has