We are dangerously close to permanently damaging our ecosystems

The lecture was held amidst the backdrop of a global wildlife conservation crisis with the UK recently announcing that 25% of its native mammals are in imminent danger of extinction. Sri Lanka, a globally recognised hotspot of biodiversity, has also seen alarming increases in human-wildlife conflicts, widespread illegal encroachment into protected areas, and policy proposals to further reduce remaining forest cover. 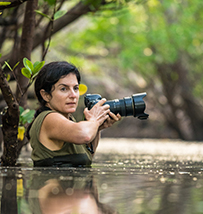 Ami Vitale is an American photojournalist and documentary filmmaker currently based in Montana, US, and has visited Sri Lanka on an assignment. Vitale is a Nikon Ambassador and National Geographic magazine photographer; she has travelled to more than 100 countries, covering conflict, nature, and wildlife. She was recently named by InStyle magazine as one of 50 women changing the world, along with Jane Goodall and Ruth Bader Ginsberg, among others.

Vitale is also a founding member of Ripple Effect Images, a collective of scientists, writers, photographers, and filmmakers who create powerful stories that illustrate how women in developing countries are affected by climate change. She is also a five-time winner of the World Press Photo Awards.

Vitale’s focus on wildlife and conservation photography began in 2009 after shooting a powerful story on the transport and release of one the world’s last white rhinos. Vitale explained that her work before that was covering the conflict in war-torn areas, and part of the shift to focusing on wildlife was taking a break from covering conflict and the realisation that every single story about humanity is also connected to the natural world; that all stories are connected in some ways.

Vitale noted that as a whole, humanity is in a very unique place, at this moment, commenting: “It is important for us to embrace the stillness and reimagine our lives and rethink the future we are heading towards, and now more than ever, it’s important to nourish one another and fight for others, our wildlife, and our planet.”

Vitale explained that wildlife plays an important part in human life because of the effect on ecosystems that humans themselves are dependent on. She then went on to stress the importance of understanding the unsustainable trajectory humanity is currently on, and that we are dangerously close to permanently damaging our ecosystems.

Vitale went on to describe her first major wildlife story, sharing how she heard about a rare northern white rhino being moved from a Czech zoo back to Africa in a last-ditch effort to repopulate the species (at the time there were only eight of these rhinos in existence). She investigated and found that the rhinos had been poached almost entirely out of existence because of their valuable horns. The few rhinos left alive were under militarised guard.

When pitching this story to editors, she was told that the story sounded more radio friendly than visual. Not letting this deter her, Vitale kept researching and came across truly remarkable stories of unsung heroes and human experiences, like passionate natives who guard these animals, spending almost all their time with them, even sleeping with them. She discovered caretakers of orphaned animals who form lifelong bonds with the animals they’ve looked after.

Vitale also recalled the deep sense of sadness felt when she covered the story of the dying last male white rhino in existence but noted that with conservationists and scientists working together, anything is possible. She spoke about the BioRescue Project, a consortium of scientists and conservationists who collaborated to help bring back white rhinos from extinction by harvesting eggs from the last few female white rhinos left and creating healthy embryos using the sperm of deceased male white rhinos. The embryos are to be implanted in a similar species of rhino with the hope of new white rhinos being born.

Another enriching story Vitale covered was the formation of the Reteti Elephant Sanctuary, the first-ever indigenous community-owned and run elephant sanctuary. Vitale explained how the community realised elephants were engineers of the surrounding ecosystem, promoting the growth of grass by ripping up trees and subtly helping other species to thrive. The community then went on to form Reteti, creating a place where weak elephants can recover. The Reteti Elephant Sanctuary is also the first sanctuary to hire female elephant keepers, a job previously done exclusively by men because of its potentially dangerous nature. 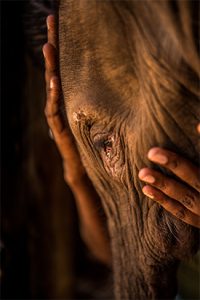 Vitale also touched on Sri Lanka, explaining how Sri Lanka is a unique hotspot of biodiversity with predators and prey co-existing harmoniously, and a great community of conservationists and organisations like the WNPS, which happens to be the third oldest wildlife conservation organisation in the world, doing their part to protect nature and the planet.

Speaking on what qualifies a photographer to do what she does, Vitale explained that it isn’t about degrees and qualifications, but the ability to be a good storyteller that helps you move forward in the field. Vitale explained that all her stories have already been told, but what sets her apart is that she finds a unique perspective and something that people aren’t talking about to highlight in her work.

“It’s important to do it for the greater good, to tap into that energy, and use your social media for good, not for you. Particularly in our field of conservation, it’s about shining light and amplifying all these unsung heroes. Good things always seem to come back to you.”

A time to dial back, a time to rethink

April 6, 2020 byJennifer Anandanayagam No Comments
As the country has come to a halt with almost no activity, except for the sale of essential items, there has been a significant impact on the environment around us.

February 19, 2021 byNews Admin No Comments
Whenever someone is being over the top, it is customary for us to say: “සයිකො කේස් එකක් බං!” (S/he is a psycho case, dude!) right? This terminology could either be derived from the words “psychosis”..