‘We are investigating several people in Sri Lanka’ – Alex Marshall 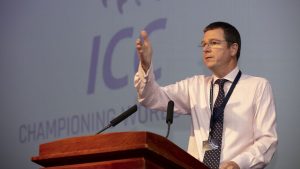 This week Sanath Jayasuriya became the first high-profile Sri Lankan player to be charged by the ICC’s anti-corruption unit (ACU). But Jayasuriya, who denies any wrongdoing, could just be the start of something much bigger. The ACU has heightened its presence in Sri Lanka as it is extremely concerned by the suspected deep roots of cricket corruption in the country.

In the following interview with ESPNcricinfo, Alex Marshall, ACU general manager, explains why he and his team have been spending a lot of time in Sri Lanka. Marshall’s says his goal is to “break the cycle of abuse and corruption” that has seeped into Sri Lankan cricket and is threatening young players.

According to Marshall, the Jayasuriya investigation is one of several being carried out by the ACU, which is likely to reveal more names in the near future. Marshal emphasises that the ACU will not name a person until he is charged and also that the real detail of the any wrongdoing would only come out once the person is convicted by a tribunal.

What prompted the ACU heightening its presence and operations in Sri Lanka?

Corruption may be linked to organised crime. So we are very worried about the young men and women players, who are very vulnerable in a system that may have within it corruption.

So I am driven by stopping this cycle where a young player coming into a national team anywhere in the world is put in an impossible position by people of power and authority, where they can say ‘no’ to the approaches and will probably never play cricket again, or they can say ‘yes’ and then they are compromised forever. And we fear that there may have been examples of people who became corrupted when they were very young, coming into the team, who might have later in life become corruptors of young players themselves. So it is a cycle of corruption and abuse within the system. And I want to break that cycle and give the players more protection.

One of the ways would be using criminal law to catch some of the corruptors outside cricket. And criminal law is not there in the Indian subcontinent. So the Sri Lanka government has been very good in proposing new legislation. But also we want to support them on having really strong, independent anti-corruption within cricket in Sri Lanka.

Recently the ACU held a special briefing with the teams ahead of the limited-overs leg of Sri Lanka’s home series against England. Was there any specific purpose behind addressing both teams?

Firstly, it was not to do with the current series. During the briefing, we showed names and pictures of active corruptors in cricket who were trying to get at players both in Sri Lanka and at tournaments elsewhere in the world. So we have openly shared the current information of active corruptors, we have shown their pictures, given their names and details. This way we felt the players are better informed. The exercise has already lead to new information coming forward from the teams.

How many of these corruptors were shown to the teams?

We showed them six. There are probably 12-20 very active corruptors that we are currently monitoring.

The pictures shown were all men, but there are couple of women, too, involved in the whole picture.

And are they all local?

In Sri Lanka it was both local and Indian corruptors. In most other parts of the world it is mostly corrupt Indian bookies.

You also met the premier of the Sri Lanka along with several other key officials. Can you expand on the purpose of that meeting?

We met the competent authority [in charge of Sri Lanka Cricket], the sports minister, the solicitor general [responsible to drafting new legislation], the Prime Minister and the President of Sri Lanka. The meetings with all these people were to give a description of what we see as the picture of corruption within Sri Lanka that is affecting the cricket.

They have been very positive in wanting to work together to introduce new legislation in Sri Lanka as a starting point that would make match-fixing or approaches for match-fixing illegal. Without criminal law, if someone is outside cricket [the ACU] don’t have any sanctions. I will still call them in for an interview. I will still disrupt them. I will still publish their picture. I will still make life difficult for them with immigration and travel. But I haven’t got any powers that I can use to sanction. Whereas in countries like South Africa, England and Australia there are specific criminal offences of trying to do match-fixing or approach a player.

So your investigations are not restricted to match-fixing and approaches made to players?

We are doing several investigations into various types of corrupt activities. The focus is really on the people. We are investigating several people in Sri Lanka connected to cricket – from inside and outside of cricket. These people could be current players, ex-players, administrators, senior officials, people outside the game.

Did the ACU submit any names of people in its meetings with the Sri Lankan heads of state?

We never name people unless they are charged. Once charged we give out the basic detail and the real detail is given only after the person is charged by a tribunal. [In the meetings with Sri Lankan heads of state and government officials] We did not name anybody. There was no list submitted as has been speculated. We absolutely did not submit any list.

It was third time both SL openers scored centuries

April 30, 2021 byRevatha No Comments
New record for Dimuth and Lahiru