We are not scared to take decisions – Mohan de Silva 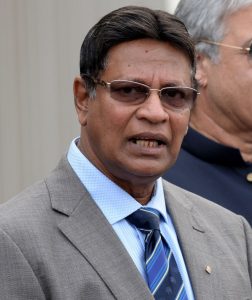 Sri Lanka Cricket (SLC) Secretary Mohan de Silva expects to stage a “great” Lanka Premier League (LPL). The five-team franchise league is now slated to begin 17 days from now, on 26 November at a specially created ‘bio-secure bubble’ centring the Hambantota Mahinda Rajapaksa Stadium.
“We hope to have a great tournament. We have to be positive and move forward. There are many parties who are waiting until things go wrong and criticise us. But we are not feared,” he told ‘The Morning Sports’ yesterday (8).

We ought to move forward

There is ample criticism, many doubts, and mistrust too, shown by various parties at SLC’s frantic effort to hold the LPL amid a staggering pandemic since last August. The event’s start was postponed at least four times only to create more and more uncertainty.

“Sometimes you would be proved right and sometimes you could be wrong. But the most important thing in this situation is to move forward,” opined de Silva, adding it could be the only means to answer the critics.

The Dubai-based Innovative Production Group (IPG), SLC’s current television production rights holders, are the event rights holders of the LPL too. Despite SLC announced the final schedule of the tournament yesterday, after getting Government approval last Friday (6), IPG which signed the rights agreement with SLC on 14 October, is yet to pay the “upfront” for the event rights that is $ 1,775,000 (approx. Rs. 327 million).

Last week SLC had to seek special and urgent ex-co approval to get a bank guarantee, instead of cash as per the original agreement, from IPG.
“We have now got ex-co approval to recover event rights fees three days before the commencement of the tournament,” clarified de Silva.

SLC Secretary also praised heavily the interest shown by Sports Minister Namal Rajapaksa in making its way clear to stage the LPL this month and also having a successful tournament.

“We can see that the Sports Minister is taking so much of interest (while) taking the risk and getting the approval from the (Health) Ministry and the HE (President Gotabaya Rajapaksa). The Sports Minister is handling it. It is a great source of strength and inspiration to us,” he said.

Only with good intentions

“We can’t entirely rule out that there is a possibility of something going wrong. There is always a risk involved in taking decisions when there is a pandemic of this magnitude. But the most important thing is that we have to take decisions progressively,” de Silva further added.

“We know that we are doing everything with good intentions and without any hanky-panky. We are taking decisions that we assume are good for Sri Lanka’s cricket.”

Inter-provincial cricket – Kandy will be strong

October 27, 2019 byThe Sunday Morning No Comments
A good set of cricketers have been picked to play for the Central Province at the 12th Prima Under-15 Inter-provincial Cricket Tournament, one of the most looked-forward-to cricket competitions for