Sarfraz Ahmed, the Pakistan captain, had praise for the Afghanistan side, and admitted his side had been “shaken” on their way to a nervy three-wicket last-over win in their Super Four match of the Asia Cup. 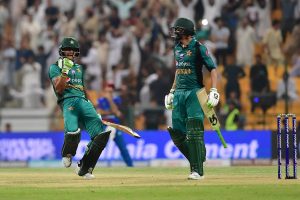 Shoaib Malik’s experience told as he completed the chase of 258 in 49.3 overs on Friday

Shoaib Malik’s experience told as he completed the chase of 258 in 49.3 overs on Friday, 21 September, his unbeaten fifty off 43 balls adding to Imam-ul-Haq’s 80 and Babar Azam’s 66 from earlier. Haq and Azam had put up a match-defining 154-run stand for the second wicket.

“We were shaken today,” Ahmed said. “The way Imam, Babar and Shoaib played towards the end was fantastic, but to chase 250 in these conditions against the Afghanistan spinners who I think are the best in the world, you have to bat really well.”

Malik, who has enjoyed a good run in Asia Cup tournaments through the years, stuck around even as wickets fell around him.

“Being a senior player, when you’ve played enough cricket, you know when you already have a start, the goal is to bat till the 50th over,” he said. “At one point the required rate was almost 10 but I kept telling myself to bat till the end because we had batsmen to hit the big shots later.”

The pressure, he added, was going to be on the bowlers. “Even the good bowlers, when they’re bowling in the middle overs, they are confident and want to get you out. But in the end, even they are on the back foot. As a batsman, you can show authority on them.”

On the day, the fielding of both sides left much to be desired. While Ahmed acknowledged there was room for improvement, Ashgar Afghan, the Afghanistan captain, rued the lost chances, including dropping Malik behind the stumps when he was on 11.

“If you let a senior player like Malik play his game, it’s difficult. Babar and Imam played really well too. But we were poor in the field and our medium pacers let us down,” said Afghan.

“We get confidence from the way we won today,” added Ahmed. “As you know, the team has improved a lot on its fielding over the last few years, but today we didn’t show that. Regardless, the team has been motivated by this performance.”

April 18, 2021 byRevatha No Comments
Yet contracts signing pushed back till end of Bangladesh series