JVP will not form an alliance with any party: Herath 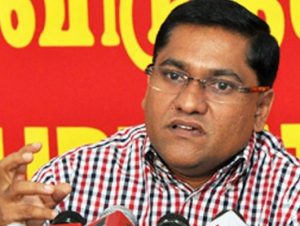 Janatha Vimukthi Peramuna (JVP) will not form an alliance with any party for the upcoming presidential elections MP Vijitha Herath told The Sunday Morning.

However Herath said any party willing to join the JVP was most welcome to join them under the National Peoples Power Movement led by the JVP.

“We are open to discussion with the SLFP and any other party if they are willing to join us under the NPPM” he said.

Herath said the only candidate the JVP will support is its National Peoples Power Movement candidate Anura Kumara Dissanayake.

General Secretary of the Sri Lanka Freedom Party Dayasiri Jayasekara in a press briefing in Kurunegala, yesterday (18)  announced plans to hold discussions with the JVP.

February 14, 2021 byLahiru Pothmulla No Comments
Indian Prime Minister Narendra Modi has said that the issue of Tamil rights has been taken up consistently with Sri Lanka and that the government was committed to ensuring that they live with equality