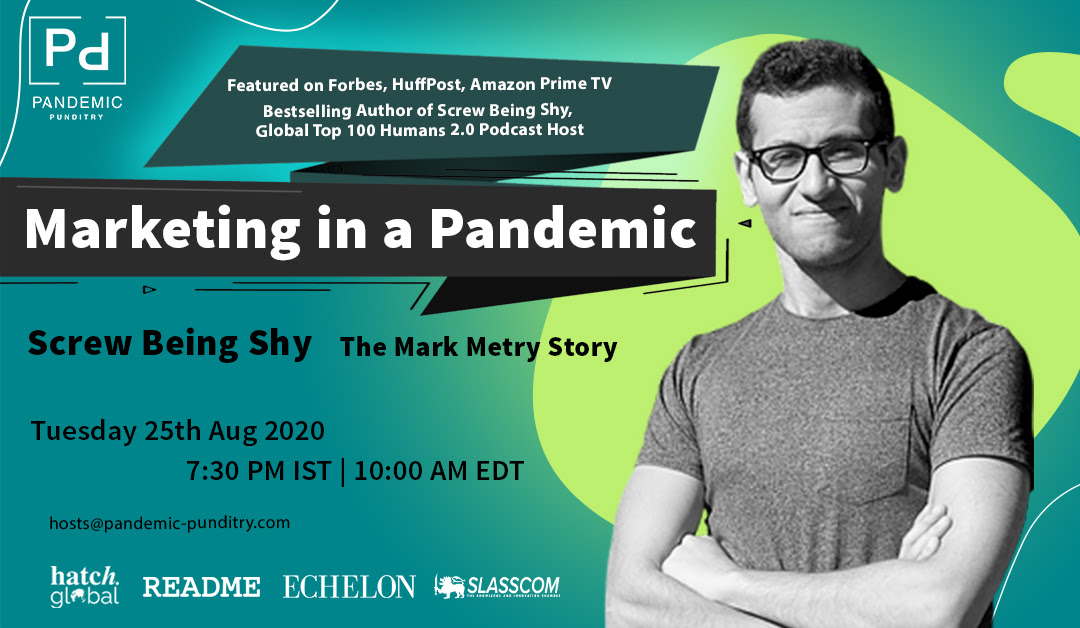 Webinar by Hatch Global: In conversation with Mark Metry

Hatch Global in partnership with ReadMe, Echelon, and Sri Lanka Association of Software and Services Companies (SLASSCOM) hosted a live webinar with author and GrowCasts Founder Mark Metry, who is also the author of the bestselling book Screw Being Shy.

Metry is a Forbes-featured keynote speaker, has been featured on an Amazon Prime documentary series, is the host of the top 100 podcast “Humans 2.0”, and is a podcast strategist who consults with funded start-ups, founders, and organisations to sustainably start, grow, and brand-build their way in competitive markets.

The webinar was held as part of Pandemic Punditry’s webinar series “Marketing in a Pandemic”.

Metry opened the webinar by sharing that despite his success as a speaker, he spent the first part of his life not wanting anyone to know his troy or who he was. The son of Egyptian immigrants, Metry grew up poor in government housing and on food stamps before moving to a small town in Massachusetts in a post-9/11 America, where he faced tremendous racism very early on in his life because of his Middle Eastern heritage.

Being poor and having no friends gave Metry the desire to achieve something and so he began experimenting online, going on to have his first successful online business at the age of 15. Metry shared that despite his success, he struggled with anxiety and depression, partly of his belief in the narrative of the American Dream and the belief that becoming rich, owning a house, and having a family and a dog would solve everything.

As a college student, Metry gained a new level of awareness and was at his lowest point, dealing with obesity, depression, and “doing a lot of things that just weren’t me”. Now, as an entrepreneur, he shared that he still does a lot of things but understands that ultimately it’s all about mental health and being careful as an entrepreneur to avoid being caught up in that one definition of success.

“Up until about 15 years ago, scientists believe that neurotransmitters were found only in the brain but research shows that up to 90% of neurotransmitters originate in the gut, through our gut microbiome, the collection of microorganisms. The gut microbiome plays a very important role in controlling digestion and balancing the immune system and other aspects of health.”

Metry explained that research showed that a key element of maintaining both mental and physical health was through diet and organising the gut microbiome. “You can read different books, listen to podcasts, meditate, but the reality is that we eat food because our body is trying to replenish cells, organs, and neurotransmitters. Looking at eating natural healthy (food while) avoiding or minimising junk food, sodas, drugs, and excessive alcohol are ways to get your gut microbiome in balance and reset your brain’s transmitters.”

Answering the question on the role of the internet in his reinvention, Metry commented that the internet played a crucial part in his journey, and while the lack of internet would have led to him being more incentivised to make more friends and take control of his life in other ways, without the internet, it is likely that he wouldn’t have been able to successfully reinvent himself.

That being said, Metry stressed that the internet is no magical fix. “If you’re super shy and an introvert and are making content or running a business, that’s going to be with you regardless. You have to deal with who you are offline.”

On building order in the chaos that is life, Metry shared some of the strategies he employs in order to create balance, one of which is the careful planning of time. “I never leave it so I’m sitting around doing nothing,” Metry explained, also sharing that at the start of each day or on the night before, he visualises how he wants his day to be, lists down his priorities, and then allocates time on his calendar for each task he needs to do. This allows him to build an order into his mindset.

“Keeping your mind ordered, particularly now, is very important because if you can’t be ordered, then you’re going to go along with whatever the world tells you which is very dangerous if you’re an entrepreneur.”

Weighing in on leadership, Metry shared that as an entrepreneur with a full-time team of four, he believes in servant leadership, something that was ingrained in him at a young age as part of a church that emphasised serving others. As a leader, Metry strives to be a lifetime friend and supporter to his employees, he explained, sharing that he had recently helped a previous employee start their own business. He also stressed that as a leader, it is important to understand that employees have their own lives and priorities and that honesty and being open with your team, especially in times of uncertainty, is very important.

As a notable digital personality through his podcasts, Metry also discussed social media presence and networking, explaining that as a speaker, he only tends to go to events where he is invited to speak.

When it comes to brand-building, Metry explained that it is very important to strike the right balance between promoting yourself and not making it all about you, and this is something that needs to come through even when networking. “I always see these people who are trying so hard to network but are not authentic about it and see people as a walking wallet.

“Social media presence and brand-building – a lot of people aren’t authentic about this. Networking authentically, he’s a speaker, would go to events he was invited to as a speaker, would see these people who are trying so hard to network but not authentic about it, and see people as a walking wallet. It’s important to think (in the) long term, especially when networking because you never know where some will be in three years or so. Long-term thinking as well as a multiperspective approach are very important.”

Speaking on how he built his own following on LinkedIn, Metry explained that he didn’t talk about himself too much. He simply promoted his podcasts, what he did, and who he was interviewing. “You don’t have to be a larger-than-life extrovert to make an impression,” he shared as a fundamental piece of assurance.

Bringing nature, science, and heritage together

September 13, 2021 byNews Admin No Comments
Asian elephants once ranged from West Asia, through the Indian subcontinent, and all the way north to the Yangtze River in China. Today, there are less than 50,000 wild elephants found in only 13 coun