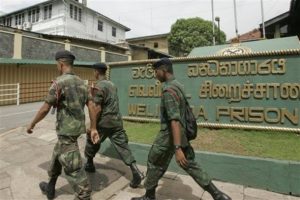 A Special High Court Trial at bar bench will hear the 2012 Welikada prison massacre/riot case from the 14 Oct , three days a week.

In 2012, clashes erupted at Welikada Prison in Colombo, as the Special Task Force (STF) commandos carried out a search inside the prison premise for drugs and smuggled mobile phones.

Twenty-seven inmates were reported to have died during the clashes.

The incident was initially written off as an unexpected, isolated incident, subsequently accusations were made that the inmates were targeted from a hit list and murdered intentionally.

February 22, 2021 byNews Admin No Comments
A letter of demand has been sent by the Jathika Sampath Surakima Chairman Ven. Elle Gunawansha Thera to two top officials appointed to protect the environment, holding them responsible for the alleged

November 25, 2021 byAazam Ameen No Comments
Following a letter issued by the Engineers’ Union of the Ceylon Electricity Board which detailed that their ongoing Trade Union action would escalate if their demands are not met, CEB General Manager