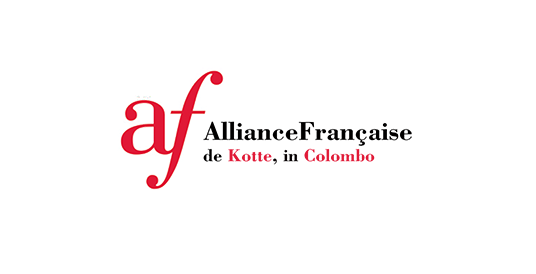 ‘We’re all about creating bridges between any country and France’: Bruno Duparc of Alliance Française

February 1, 2021 by Venessa Anthony No Comments

Alliance Française (AF) was created in 1883 with hopes of promoting better understanding between people and fostering a spirit of co-operation based on solidarity and mutual respect through dialogue between cultures. Now, many decades later, they have established themselves as an international network, with over 830 branches operating throughout the world in 131 countries.

Sri Lanka alone is home to five Alliance Françaises, with Colombo being the first to establish a branch in 1954, followed by Kandy 13 years later, Matara in 1997, and Jaffna in 2004. An annex of Alliance Française Matara was later created in Galle, back in 2007. All five centres work efficiently to conduct courses, organise exams, and promote French culture by proposing numerous cultural activities all over Sri Lanka.

Alliance Française de Kotte Director and Alliance Française in Sri Lanka and Maldives Co-ordinator Bruno Duparc explained how he was inducted into Alliance Française: “I was mandated to do overseas service as a young teacher, and I was proposed to go to the AF in Colombo in 1987, and I fell in love with Sri Lanka.” He added that he knew that his life was going to revolve around AF, teaching and managing the centres.

He stated that AF is a non-political and non-religious organisation. Therefore, they are able to easily make local friends in over 130 countries to accept this concept from AF’s initiation.

“AF has always been pursuing its missions. We’re all about creating links and bridges between any country and France, while promoting French language and culture, and also the culture of other French-speaking countries,” Duparc said, adding that their main objective is to enhance and reinforce these bridges with the support of local communities. 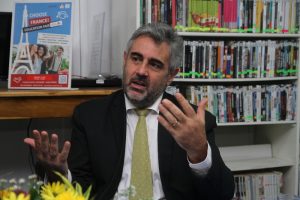 Teaching amidst a pandemic

No sooner than the pandemic-induced lockdowns were announced, all Alliance Françaises in Sri Lanka took the necessary measures to transfer all of their on-site classes to online classes. Duparc noted that for the last eight months, they have been exclusively teaching online, but they are looking into re-enriching the process with new resources. “It’s a totally new pedagogy when you teach online in comparison to in-person classes, so we need to learn this new method of teaching, which is what we’re working on now.”

He stated that they reacted very fast to the pandemic, adding: “I have to praise my colleagues for being very active and responsive even with the pandemic, moving all activities and programmes online.”

Duparc noted that as soon as a window of opportunity arises to resume on-site classes at AF, they will not open their doors entirely. “We can have as many online classes as we wish but we can have only a limited amount of on-site classes at AF Kotte. So the idea is to make it progressive and opt for a type of hybridisation, where if students attend classes twice a week, one of the classes will be conducted on site and the other will be online as now.” This will allow AF to open more classes for a larger number of students, working favourably for both the students and AF, as students will be given the opportunity to interact with their teachers and peers, and AF will be able to host more classes and spread the language across the country.

“Online classes have their advantages, as one may save time and can learn in the comfort of their own homes, so we can have higher quality classes,” Duparc observed.

Duparc stated that in order to keep up the number of candidates, they need to explain to the general public why it is important to obtain a diploma or a degree in a language. Even with the pandemic, they still maintained participation of over 75% of their students. He added that once their candidates reach a certain level of framework, B2, to be specific, they may go and study at a French university at a very moderate cost. “We have fantastic universities in France, but as they are all taught in French, we require students to have a minimum of a B2 qualification to attend them.” Duparc stated that they strongly advise students to sit for at least 200 hours of class before they go to France, as they will find it easier to read addresses, take the bus, and perform day-to-day activities safely.

Gesturing around the library at the AF branch in Kotte, Duparc pointed out the shelf dedicated to university pamphlets and any information that students may need to settle on which university they would like to attend, with all of its requirements listed. Both AF Kotte and AF Kandy host a “campus France office”, which is the only official French agency in Sri Lanka for the promotion of higher education, international student services, and international mobility, all free of charge.

Even though the pandemic has caused a break in activities, AF strives to find alternatives to give French culture lovers access to programmes through online conferences, live performances, and movies on certain platforms. A comprehensive cultural programme is to be defined for the months to come, giving the Sri Lankan audience a chance to re-enter French culture. After having to cancel most of their programmes last year, AF is now looking to reshape the events planned for 2021 to be presented to enthusiasts of French culture.

On a regular basis, the French Embassy and AF Kotte will restart the screening of French movies. If sanctuary conditions allow, the first screening will occur in March for International Women’s Day.

Another event to be held this year from 13-20 March is “La Semaine de la Francophonie”, meaning French-speaking week. The French Embassy and AF Kotte together with the Swiss Embassy, the High Commission of Canada, and the Association of French Teachers of Sri Lanka will put their common efforts together to present an entertaining programme showcasing films, concerts, contests, and poetry. The poetry workshop, organised by AF Kotte, will be conducted from January to March and the best performances will be featured either online or on stage during the Francophonie week.

The Association of French Teachers of Sri Lanka will also be hosting a quiz where students from public, private, and international schools will be invited to join in answering a multiple-choice questionnaire and win prizes.

They also recently hosted “Night of Ideas – Reconciliation in practice”, under the theme “Close(r)” organised jointly with the BCIS (Bandaranaike Centre for International Studies), the International Centre for Ethnic Studies (ICES), and the Alliance Française de Kotte, with the support of Institut Français.

February 2, 2021 byNews Admin No Comments
Model Sayuri Jayarathne, who was recently crowned Top Model Sri Lanka, will go on to represent her country in the 27th edition of the “Top Model of the World” pageant. Jayarathne is a past pupil.

The new normal for the fashion industry needs to be responsibility

January 31, 2021 byNews Admin No Comments
Suffice it to say that 2020 was a strange year, and 2021, while a new year, is set to be equally as strange. In 2020, people all around the world redefined their normal lifestyles. They had to adapt..