What does a divorced lady not have that a married woman does?: Mrs. Sri Lanka World 2020 Pushpika De Silva

April 7, 2021 by Venessa Anthony No Comments

Amidst all the glitz and glamour the fashion industry hides behind, the recent events that unfolded at the Mrs. Sri Lanka World 2020 pageant seems to have shed light on what a cutthroat industry it supposedly is. With Mrs. Sri Lanka for Mrs. World 2020 Caroline Jurie removing the crown off the winner – Pushpika De Silva – while she was on her victory walk on stage, allegedly so violently that De Silva had to be hospitalised for her injuries, and claims that De Silva is not eligible to participate in the pageant, as the rules state that divorcees are not allowed to participate, this might just be the biggest scandal Sri Lanka has seen this year.

At a press conference to announce the re-crowning of De Silva held yesterday (6), following social media uproar condemning the entire incident, De Silva shared her side of the story. Mrs. Sri Lanka for Mrs. World National Organiser Chandimal Jayasinghe was also present at Shangri-La Hotel, Colombo where the press conference took place. De Silva has been re-crowned as the winner, after the crown was handed to the first runner-up. 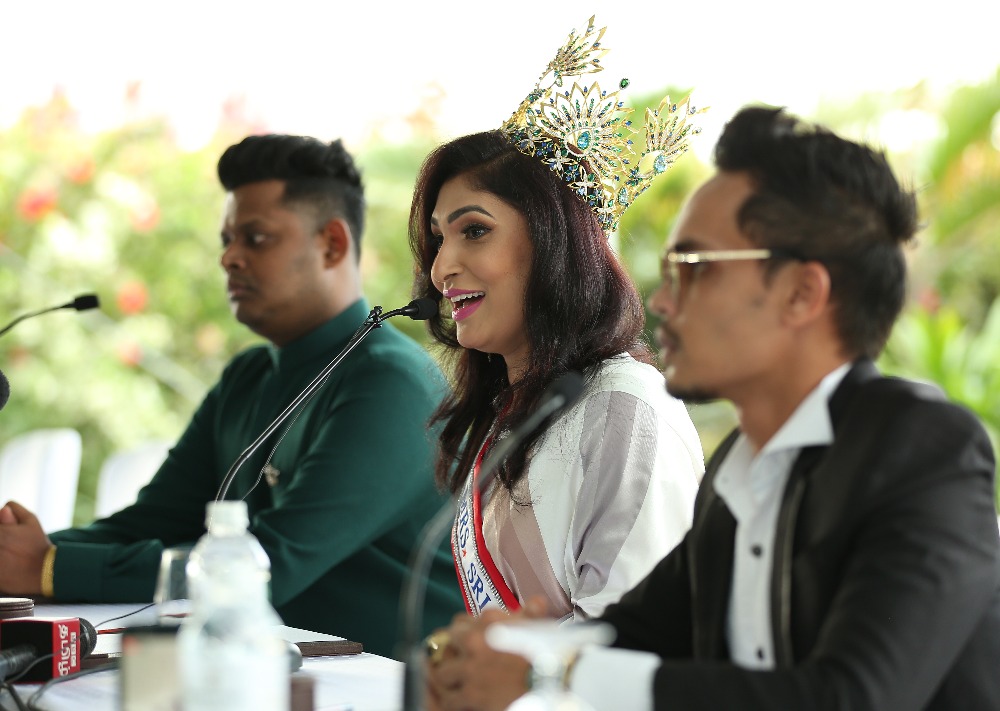 Starting off the conference, De Silva stated that she forgives all those who have hurt her. “I don’t want to name them, but everyone here saw what happened. I forgive them. I was brought up by a good, respectable family, so I can acknowledge that the past is in the past,” she said. She went on to call herself a woman of iron and spoke about the pain of being a single mother, adding that her crown is dedicated to single mothers out there in an attempt to empower them.

Breaking down in tears, she spoke about how she never expected such a thing to happen to her and that it saddens her greatly to have gone through these proceedings. “A woman should never stop another woman from achieving great things in her life by hurting them. That is not a victory, that is a loss,” she said, adding that her parents have been a pillar of strength through difficult times, knowing how much she suffered to bring up her child on her own.

She expressed her undying gratitude to Mayor of Colombo Rosy Senanayake, naming her a shining star, adding that there is no one like her. “She was my role model throughout this journey and she is an example for us all. I strive to become like her,” she shared.

She also shared her thoughts on the first runner-up, saying: “I don’t have any thoughts on this. I’m sure this was something she had never imagined. She also went through a difficult situation and is probably as affected as I am. We are not in the wrong – it’s the people who tried to interfere.”

De Silva made it known that if anyone wanted to stop her from moving forward, they would not be able to do so. “I have faced bigger problems in the past, and if I was to be affected by anything, it would have been then. I am a strong woman and no one can bring me down.”

Speaking about the lessons she learned from last week’s events, she added that whether or not she has support, she will push forward. “I have no grudges against those who don’t support me. The biggest lesson I learned from this situation is that more than the title of Mrs. Sri Lanka for Mrs. World, I feel like I won over the world. Despite race, religion, and nationality, many people came forward and expressed their support towards me. I will be a voice for the voiceless.”

In response to allegations that a divorced woman is not allowed to participate, let alone win, she asserted that the rule is that divorced women cannot participate, and that there is no such rule that says a woman that is separated can’t compete. “I am officially allowed to compete in compliance with the rules and regulations of the pageant, as I am still married.”

She further questioned: “What does a divorced lady not have that a married woman does? If you take 10 women, nine would be divorced and the one may be staying with the husband because of the child or because she’s unable to face the world as a divorced woman.”

On the same topic, she made it very clear that the media and the general public need not get involved in her personal matters, stating: “It’s my right to file a divorce or withdraw the divorce. Whether or not I’m divorced – not that I am – I will participate in this competition. I worked hard for this competition and I will see it through.” Confirming this statement, event organiser Jayasinghe added that the participants are allowed to compete even with a divorce case still ongoing, as long as the participant is not officially or legally divorced.

When asked if there was a political opportunity in her future, after rumours of her political connections having a hand in her re-crowning, she avoided answering the question. “I had an interest; right now, I’m not sure, but I would consider it in the future, as I would like to stand up for women and children anywhere. As of now, this is not something I want to talk about.”

She thanked the organisers and her team for breaking rest, working tirelessly, and making this competition happen, adding that she hopes that next time there will be better people amongst the guests.

Commenting on her husband’s post on Facebook where he claimed to have no involvement with De Silva and stated that the public should take up their issues with her, she expressed that he was in the right to make such a claim, adding that she has announced to social media that she is single and questioned why they needed to bother him. She strongly expressed: “Anyone with a brain should be able to understand that I am not yet divorced, but separated, therefore we are not involved with each other, but are still legally married.”

“I respect everyone present as members of the media, but we need to look at this in a positive light and not highlight the negative aspects. As a country, we need to put aside race, religion, and other factors and come together to strive forward in one journey. We will not move forward at this rate,” she stated, concluding, adding that she has kept aside her grudges and is working towards a better future.

IDF and its glamour come all the way to Sri Lanka

October 28, 2018 bythemorninglk No Comments
India Design Forum (IDF) held their first event in Sri Lanka on 18 October, 2018. India Design Forum was initiated as a comprehensive design conference in 2012 to cater to all disciplines of design.