What happened to Dasun Shanaka’s men in the Gulf 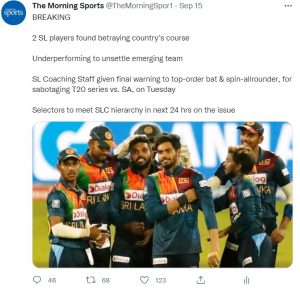 The 15 September The Morning tweet that created much uproar

The Morning Sports’ Tweet on 15 September, which said two Sri Lanka players had been found betraying country’s course by underperforming ‘to unsettle an emerging team’ during the home T20 series against South Africa created uproar among fans while also prompting SLC to issue an immediate clarification and its Anti Corruption Unit inquiring us whether there was any fixing involved in the situation.

Some who thought that we were seeking undue publicity by publishing false or cooked stories can now come up with an answer to this: Why was then Dhananjaya De Silva aka DDS, the Vice Captain of the side not so long ago, was benched during the entire World Cup?

There was the rub!

We too published the said SLC ‘clarification’ in full with no note from us because it concerned not only the Morning but all local media in general. Many had speculated that the two players mentioned in our Tweet were De Silva and Wanindu Hasaranga.

We had also maintained that the team’s hierarchy, including the Skipper, had its reservations about DDS’ commitment and his genuineness during the South Africa series.

Perhaps our Tweet could have indirectly caused De Silva’s eventual inclusion in the final 15-man squad for the World Cup but still we said, on 22 September, that the batter would still be benched at the tournament, which became true. He was named in the squad merely for the namesake.

Those who said that we were cheap publicity hunters, please tell us any other reason why DDS was not given a chance, even in the West Indies dead rubber, if he was within the plans of the team for the World Cup!

One man fell in line and did his part and the other did not. Isn’t it absolutely CLARIFIED now? 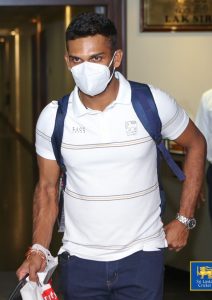 Bitter-sweet lessons for the future: Sri Lanka Captain Dasun Shanaka returns to the country with the team last (6) morning from their T20 World Cup campaign in the Gulf. Photo SLC

Nobody is ridiculing nor find much fault with the Sri Lanka white-ball team though they missed out on reaching the T20 World Cup semi-finals this time in the UAE and Oman. Sri Lanka showed a much-improved character and promise. Yet there are some unavoidable lessons and observations in their World Cup campaign which we would like to note for their value for the future.

* There was some unjustifiable selections during the Super-12 round. Though there was a fixed combination of 11 players most of the time, why Dhananjaya De Silva, Dinesh Chandimal, and Akila Dananjaya were not played looked somewhat problematic, at least in the final game against the West Indies.

* Inclusion of seniors such as Kusal Perera, Chandimal, and De Silva in the squad, sources say, affected the unity and coherence of the side. This is a fragile time when there is a serious, underline tension within national ranks between Shanaka’s new team and some seniors in the national pool.

* Did Kusal Perera contribute enough? Didn’t he drop crucial catches behind the stumps? Was Minod Bhanuka done an injustice as he, of late, was finding his feat in the top level as Sri Lanka’s white-ball wicket-keeper and opening bat?

* Mahela Jayawardene is a Sri Lanka legend who always reserves his best for India! He will coach profit-oriented overseas franchises round the year but when it comes to serving the Sri Lanka national team, he has no time. Will he leave Ambani’s Mumbai Indians midway of a tournament to rest and attend to his family?

* Mahela’s services would have been more essential for Sri Lanka in the Super-12s, rather than in the qualifiers where Sri Lanka could have anyway done well even without his inputs. He continues to disregard requests to take up coaching Sri Lanka.

* That is probably why many in the cricket circles say that his voluntary support for Sri Lanka in the World Cup qualifiers is mere eyewash.

* Sources say that Skipper Shanaka does not still have his full say in all matters, particularly selections. The Captain still cannot get the 11 he prefers, some argue.

* Shanaka’s nature of taking on the journalists and his club coaches, when it comes to taking advice, is only for his detriment.

* Any future selection committee will not tolerate a Captain who hardly scores. Shanaka scored only 96 runs in six matches with a highest score of 26 in this World Cup.

* It’s pertinent to mention here that Charith Asalanka is already seen as a future Sri Lanka Captain by those who matter in local cricket administration.

* Shanaka’s SSC clout, with the club’s supremo Mahela Jayawardene being the National Sports Council (NSC) Chairman, will not survive him for good, without any substantial contribution from him as a player.

* Shanaka has more problems. Can he continue like this without the support of his senior players? Remember what allegedly happened to Tillakaratne Dilshan who did not get support from his seniors then: Jayawardene and Kumar Sangakkara? Where did a player like Varuna Waragoda end up after he sought to go against Arjuna Ranatunga some decades ago?

* This alleged domination of both Mahela and SSC and the current power struggle between the NSC/Mahela and Sri Lanka Cricket (SLC) have indirectly caused the ban on the three players — Kusal Mendis, Niroshan Dickwella, and Danushka Gunathilaka — to remain un-lifted by the cricket board despite continued requests to do so. Remember Mendis joined SSC very recently?

* Sanity looks to have prevailed at last as the authorities seem to go for an all-local coaching staff when they are after parting ways with Mickey Arthur and co. soon.

* The popular impression among cricket circles these days is that the passer-by who videoed three Lanka players roaming and smoking on Durham streets, has done a bigger service to Sri Lanka cricket than either Tom Moody or Mickey Arthur! The non-cricket act in fact marked, though accidentally, the real turning point in Sri Lanka’s fortunes in recent times, rather than any major coaching or technical contribution.

May 17, 2021 byRevatha No Comments
The foxes clinch Cup in a thrilling finale against Chelsea at Wembley on Saturday (16)