What it takes to be a champion

September 5, 2021 by Dimithri Wijesinghe No Comments

While our athletes have shown incredible fortitude at these events, with Sri Lanka winning bronze at the 2012 Summer Paralympics in London in the men’s 400 m T46, and in 2016, winning bronze in Rio, in the men’s javelin throw F46 final, the coveted first Paralympic gold medal had remained but a dream for years. 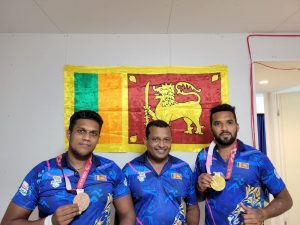 However, Tokyo 2020 proved to be what we’ve all been waiting for, as on 30 August, Sri Lanka’s Dinesh Priyantha Herath set a new world record in the men’s javelin throw F46 event and picked up the gold medal, winning our country’s first-ever gold medal in the Paralympic Games.

Speaking to Brunch from Tokyo, the two athletes and their coach Pradeep Nishantha spoke of their success and what they’ve been able to achieve at the highest possible level in sporting excellence.

Speaking about his gold medal win on Monday (30 August), Dinesh shared that while he doesn’t want to seem overconfident, he was somewhat certain of his win. This was primarily because, in preparation for Tokyo 2020, he said that he really put in the work and was confident his effort would pay off.

“It’s really difficult to put into words how it felt to become the world record holder. In my sport, it’s an incredible personal achievement; and at the same time, being able to win a gold medal for my country,” said Dinesh, adding: “It is an indescribable feeling. I feel immense pride and overwhelming gratitude to everyone who has helped me.” 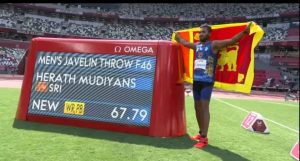 Dinesh shared that he really must extend his thanks to the National Paralympic Committee of Sri Lanka, Minister of Sports Namal Rajapaksa, and the National Sports Council (NSC) and High-Performance Committee, chaired by Mahela Jayawardene.

He shared that all of the training was well facilitated, which was a great relief, and despite the challenges posed due to the Covid pandemic, this support system did not waiver. “The Paralympic Committee, especially, ensured that none of the athletes felt the stresses of the pandemic, making sure that we were all well taken care of, so much so that all we had to do was take care of ourselves and focus on training and continue in our journey towards our goal,” he said.

Considering all the support, above all, Dinesh stated that his wife and three children were his greatest strength in reaching these heights. He also shared that following his injury in December 2008 – when he was wounded in Kilinochchi during the final stages of the civil conflict – he had to retire from the Army on medical grounds, and that the few years that followed were difficult, as his family had to rely on his pension, and focusing on sports didn’t really facilitate a comfortable life. 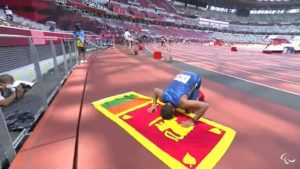 His injury, where his left arm was pierced by three bullets, made it so that he was unable to engage in regular activities and was forced to spend his next four years at the Ragama Ranaviru Sevana for treatment. He shared that his regiment and army buddies encouraged him to pick up a sport as a recreational activity, in order to stay positive and active.

He then had his start in parasport in 2014. However, he said that the more time he spent doing sport, the more financially difficult it became for his family, as it was not sustainable because he continued to rely on his pension from the Army. “My wife was very upset with me doing the sport. However, now she supports me. I have three kids and I can’t wait to go and see them. They will be thrilled to see me back with a gold,” said Dinesh.

Sharing with us a little more on his experience in Tokyo, Dinesh said that he had his eye on the prize but things are never certain, and anything can go wrong at any time. “I had my eye on my two main competitors, the two Indian athletes – one of them was actually the reigning champion – but I was able to take the gold in the end,” he said happily, as he once again recalled his record best throw of 67.79 m, which clinched our country’s maiden gold in the Paralympics.

Dinesh said that as a para athlete suffering from an acquired injury, he underwent a lot when training, especially as someone who did not do any sports in school. “I experienced a lot of financial struggles when I was schooling. It was my mother who took care of our family and we lived in poverty and we worked daily at the paddy field and so there wasn’t a lot of time to dedicate to school-level sports,” he said, adding that as someone who took up the sport so late in life, he is even prouder of how far he has come.

He said that he is hopeful that his achievement would encourage others to continue to pursue their dreams, especially if they feel that it is too late to start something; to let him be an example for how it is never too late to start. “You will be surprised to know there are so many kids now following the sport of javelin,” he continued. “It has really picked up. There is a belief now that we can compete with the Europeans. You will see. Asia will emerge as a superpower in the javelin (events) in the coming years.” 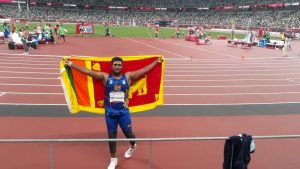 Accompanying Dinesh is, of course, bronze medallist Corporal Dulan Kodithuwakku, who took third place with a personal best of 65.61 m, while his competition, India’s Sumit Antil, secured the gold medal with a world record throw of 68.55 m. Dulan earlier participated in the Asian Para Games in Indonesia 2018, World Para Games 2019 in Dubai where he placed fourth, and National Para Games.

Dulan stated that the country saw on Monday, both with Dinesh’s win and his own, were the results of a lot of dedication, and nearly half a decade of targeted training and fantastic guidance from their coach Pradeep Nishantha.

He also said that “luck happened to be on our side as well, with the weather in Tokyo aligning perfectly to produce the training conditions we were used to here in Sri Lanka”. He said that their team was very well adjusted and conditioning was somewhat a breeze and things fell into place quite nicely.

Pradeep also spoke of his two athletes, expressing his pride. “As their coach, it brings tears to my eyes to even speak of their dedication and what they have achieved,” he declared, adding also that he is even happier because he feels that they have repaid all of the support they received back in Sri Lanka.

He said that the Paralympics is the most hopeful arena in sports and that he has always employed the mindset that injury or disability is not the end of one’s journey, as there are always paths to take and you are never at the end of your road. “I always train my athletes harder, the able-bodied and the para athlete always train together, and there are no different standards set for either group; they are all one, and that way, I have managed to instil in them the belief that they can achieve whatever goal they set their minds to, and in keeping with that training you see the results here.”

Pradeep shared that he hopes that the two wins would shine a light on parasports, and that it may hopefully encourage other young athletes to join the National Paralympic Committee of Sri Lanka, as they provide great support for athletes who wish to reach greater heights. “There is a general lack of awareness. If you take the example of those who are born with dwarfism, you may not have known that there are three athletic events where they can compete, which is just one example of the opportunities available to them.”

He said that it is incredible that sports have been recognised as worthy of support from the Sri Lankan Government, and he is hopeful that this support will continue into the future and more and more athletes will come out of the woodworks to explore their talents and bring Sri Lanka much more sporting glory.

Senseless destruction of a protected wetland?: Raising awareness in support of Thalangama Wetland

February 15, 2021 byNews Admin No Comments
Colombo is the world's only Ramsar-accredited international wetland capital city. On top of 40% of Colombo’s wetlands already being lost due to direct and indirect impacts of urbanisation, the constru

August 2, 2021 byNews Admin No Comments
In celebration of International Handloom Day on 7 August, Selyn will be celebrating a week filled with activities and premium offers online and at their Fife Road Flagship Store in Colombo 5.